Season 2-55 – Stalked by the Rare Hunters 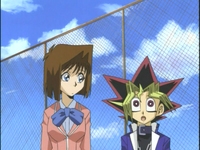 Yugi mentions about Kaiba’s tournament to Joey, and Téa says the whole thing begins in less than a week. Joey is angry because he never received an invitation to the tournament, even though he was the runner up duelist at Duelist Kingdom. Tristan tells Joey that Kaiba just doesn’t like him. Joey asks Yugi if he plans on entering it, and Yugi replies that he has to because it’s the only way to achieve his destiny. Joey wonders what Yugi means by “destiny”. Yugi explains that some evil force is coming back to take over the world, and it’s his job to defeat it. Joey decides that he wants to help Yugi stop this new evil, so he decides to join the tournament. He believes that his Red-Eyes Black Dragon will bring him to victory, and he kisses his card. Téa reminds Joey that Kaiba beat him the last time, and Yugi agrees. However, Yugi thinks Joey should not worry about Kaiba and focus on getting used to Kaiba’s new Duel Disk system. Joey was shaken up by Kaiba’s last Duel Disk system, but he’s excited to enter the tournament, so he doesn’t mind. He runs off to register.

Yugi, Joey, Tristan and Téa arrive at Domino City. Téa points to what looks to be the registration office, and Joey and Tristan immediately run off towards it. Meanwhile, Yugi thanks Téa for spending the day with Yami and helping him unlock more secrets to his past. He then goes off about how Kaiba’s new rule of the loser forfeiting his/her rarest card to the winner is a great thing because the winner of the tournament gets a deck of the rarest cards assembled, but it’s also a bad thing because if he lost, he would have to give up his Dark Magician. Still, Yugi is prepared to do whatever means necessary to help Yami uncover his past.

The group of friends arrive at the Battle City registration office. They walk in and ask the store employee about obtaining duel disks. The employee tells them that they are lucky because he only has three duel disks left. Before he can hand them out, he needs to first make sure that each contestant is qualified. Yugi tells the employee his name, and the employee enters it into the computer. He sees that Yugi has five stars, the highest possible, and that his rarest card is the Dark Magician. Yugi wonders where he gets this information from, and the employee states that Kaiba has compiled information of all the duelists in the world. He then gives Yugi Kaiba’s new duel disk system. Joey also wants to register. He tells the employee his name. The employee enters it into the computer and finds out that Joey only has one star, making him illegible to enter. This makes Joey mad, and he throws a tantrum about it. The employee finds out that Joey holds the Red-Eyes Black Dragon, and he tells himself that his master would be pleased to have it. So he adds in three additional stars for Joey, making it four. The employee tells Joey that his hard drive was malfunctioning, and that he is qualified to enter. Joey gets excited about this. The employee hands over a duel disk to Joey, and Joey happily takes it in his hands. When the group leaves, the employee messages someone on the phone to send over the Rare Hunters.

Night comes, and Joey tells his friends that he has to head over to the hospital because his sister Serenity is going to have her operation the next day. Téa wishes him and Serenity the best of luck, and then Joey takes off. Tristan hopes that Joey will be okay at the hospital. Joey’s mother will be there, and she was the one who separated him and Serenity. Joey hasn’t spoken to her since he was a kid. Yugi concludes that Joey hasn’t spoken or seen his mother in seven years! Tristan states that he will make sure that the Wheeler family unite once again. Yugi thinks that Tristan just wants to impress Serenity.

Meanwhile, Joey runs through an alley to the hospital. He hopes to arrive there on time because he doesn’t want to let his sister down. Suddenly, he is confronted by three men in robes. They happen to be Rare Hunters! Joey tells them to move out of the way, but the men don’t let him go anywhere. One of them speaks, and he wants to duel Joey for his Red-Eyes Black Dragon. Since the Rare Hunters aren’t allowing him to escape, Joey agrees to the duel. They will duel by Battle City rules so that the loser must forfeit their rarest card. 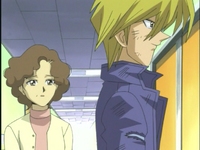 At the hospital, Serenity is worried and scared about getting her eye operation. She tells her mother that as soon as Joey arrives, she knows everything will be okay.

The duel begins. Joey starts things off by summoning Panther Warrior in attack mode (2000 attack points). The Rare Hunter then begins his turn, and he summons one monster in defense. Joey draws a card. It happens to be the magic card Scapegoat. So he activates it and four sheep tokens come to the field. Since a monster must be sacrificed in order for Panther Warrior to attack, Joey sacrifices one of the sheep tokens. Panther Warrior attacks the Rare Hunter’s face down monster and destroys it. Joey is excited that he is winning, but the Rare Hunter says he still has more surprises. He draws a card and plays Graceful Charity. He draws three cards, discards two, and then summons another monster into defense.

Serenity is worried because Joey still hasn’t shown up at the hospital. She hopes that he is alright. The duel continues. Joey summons Alligator Sword in attack mode. He then sacrifices another sheep token so that Panther Warrior destroys the Rare Hunter’s defense monster. Now that the Rare Hunter is defenseless, Joey is able to attack him directly, according to Battle City’s new rules. So Alligator Sword attacks, and the Rare Hunter is down to 2500 life points. It’s the Rare Hunter’s turn again. He plays Graceful Charity a second time. He draws three cards, discards two, and then summons another monster in defense. Joey calls the duel “boring”, since nothing exciting is actually happening.

When it’s his turn again, he remembers Yugi telling him that he needs to sacrifice weaker monsters in order to bring out stronger monsters. So Joey offers his Panther Warrior and Alligator Sword to summon Red-Eyes Black Dragon. The Rare Hunter has a surprised look on his face. Joey has his monster destroy the Rare Hunter’s defense. Joey claims that this is his easiest duel ever, since all the Rare Hunter is doing is playing defense. The Rare Hunter disagrees and says that he has been leading Joey up to this final moment. So the Rare Hunter draws a card, and then summons a complete set of all five Exodia cards from his hand. With Exodia on the field, Joey has no chance. He is instantly knocked down to his feet with one blow, and his life points drop to zero. The Rare Hunters then punch and knock Joey down to the ground, and they take his Red-Eyes Black Dragon.

The next day, Serenity is in the hospital room, and she has locked the door. Her mother wants Serenity to open the door, but she refuses to do so until Joey arrives. So Serenity’s mother calls Yugi up and reports to Yugi that Joey never showed up at the hospital. Yugi assures her that they will find him. He, Tristan and Téa search around for him, but they can’t find him anywhere. Téa suggests to Tristan that he checks downtown on his bike. Tristan likes that idea. They decide to split up and continue to search every spot in the city. Yugi and Téa can’t find Joey anywhere, but after awhile Tristan finds him. He honks his horn to let Yugi and Téa know that he has recovered Joey. Yugi and Téa are so glad that Joey is alright.

At the hospital, Serenity still refuses to open the door. The doctor tells Serenity’s mother that he cannot wait any longer. He begins to walk away, but a familiar voice stops him. It’s Joey! He apologizes to Serenity for letting her down. He explains how a group of thugs confronted him and stole his best card. Serenity accepts Joey’s apology, and she opens the door. Their mother thanks Joey for his kind words. Later that day, Yugi receives a call from Joey stating that Serenity’s operation went well. Yugi and Téa are cheer. Then Yugi asks who those guys were, the ones that stole his Red-Eyes Black Dragon. Joey doesn’t know, but he swears to get his card back. Yugi hangs up the phone and thinks that whoever stole his Red-Eyes is more dangerous than meets the eye. 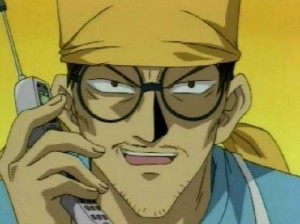