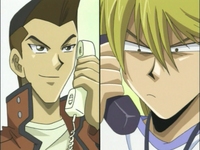 It’s the day of the Battle City tournament. Grandpa is outside sweeping up around his shop. He complains about how Yugi decided not to do his chores this morning in order to prepare for the tournament. Then Grandpa realizes that today is the first day of the tournament. Since he doesn’t want to miss it, he decides to close up his shop early. Meanwhile, upstairs Yugi has just finished building his most powerful deck. He worries that it isn’t good enough, and Yami assures him that they have to just believe in the deck now. He explains that they must win Kaiba’s tournament in order to save the world from an upcoming evil, and he and Yugi must believe in the power of their deck in order to do it. Yugi promises that he will help Yami save the world. Yami had to do it 5000 years ago, but the big difference now is that he has Yugi by his side to save the world once again.

Meanwhile, Joey is busy trying to figure out how to get his Red-Eyes Black Dragon back from the Rare Hunter. He can’t believe that he let that Rare Hunter take his best card and right before the tournament started! He’s so worked up with his situation that he almost forgets to call Serenity. He picks up the phone and dials the hospital’s number. Tristan picks up on the other line, surprising Joey. Tristan says that he decided to keep Serenity company, since Joey is participating in the tournament. Jeoy isn’t too happy that Tristan is taking care of his sister. Tristan hands over the phone to Serenity. She akss Joey why he never told her that it was thanks to Tristan’s training that he won the tournament at Duelist Kingdom. Tristan then comes on the line again and tells him not to forget that three-card combo he taught him. Then he hangs up. Joey is frustrated that Tristan is telling lies to his sister just so he can impress her.

Duelists from all over the world are now entering Domino City for the big tournament. Two office-like people in suits wonder what those giant “wristwatches” are called. A pair of duelist walks up to them and states that they are duel disks. Soon the tournament will begin and duels will take over the city. Yugi is also there, holding a card. He states that the card was from the package containing the duel disk, and a piece of a map is on it. He assumes that it’s another twist that Kaiba put into his tournament. Suddenly, Mai calls out for Yugi, and she meets up with him. Mai is impressed with the tournament so far, but she calls all the duelists “losers”. She wonders who she will beat first. Another familiar voice calls out for Yugi. It is from Rex Raptor and Weevil Underwood. They plan on getting revenge on Yugi and Mai for defeating that back at Duelist Kingdom. Suddenly, Mako appears and torments Weevil. Weevil, Rex and Mako all claim that their decks have been improved from Duelist Kingdom and that they will be victorious.

Meanwhile, the Rare Hunter that stole Joey’s Red-Eyes Black Dragon is on his laptop looking up Yugi and Mai and their rarest cards. He states that their cards will make great additions to his collection. The only question is who should he duel first? Weevil, Rex and Mako then head off. Mai also decides to head off. She tells Yugi that the next time they meet, they’re rivals. Yugi agrees. With everyone gone, he tries to find Joey, but has no luck. He’s worried because Kaiba will be announcing the start of his new tournament soon.

Seconds later, Kaiba’s voice is heard, as he welcomes all the duelist to Battle City. His voice is coming from his huge blimp! Kaiba appears on a big screen that is implemented to his blimp. He begins by introducing his new duel disks and how they can be used to duel anyone, anytime, and anywhere. He then talks about his biggest rule: the rule that the loser of a duel has to forfeit their rarest card to the winner. Kaiba also will be participating in the tournament, so he welcomes any duelist to challenge him, but he expects to win. Kaiba then begins to explain that only eight duelists will make it to the finals, which is located in a hidden location. Every duelist has received a locator card (the card that Yugi was holding before). Six locater cards are needed to enter the Battle City finals. When all six locater cards are stacked together, they produce a map of Battle City with the location of the finals. Finally, Kaiba announces the start of the tournament, and the duels begin.

Meanwhile, Téa is at Battle City trying to find Yugi and Joey. She tells herself that his was a bad day to oversleep because now the whole city is dueling, and it will be hard to find them. Yugi and the Rare Hunter fire up their duel disks, and their duel begins. Kaiba uses his tracking system to find out that Yugi is dueling in the first duel of Battle City. Mokuba notices that more people are dueling too. All cards from the duels are being recorded, so if another Egyptian God card is played, they will know exactly where it is. Yugi starts the duel off first by drawing a card. Joey tells Yugi to watch out. The Rare Hunter quickly cuts Joey off by telling him to be silent. He looks at his hand and sees that two of the Exodia pieces are already in his hand, and getting the others will be easy. Yugi starts his turn by playing two cards face down. Then he summons Beta the Magnet Warrior in attack mode (1700 attack points). The two office-like people wonder what that thing is. The same two duelists tell them that it’s a duel monster and that the duel disk renders the cards in holographic 3-D form.

The duel continues. The Rare Hunter draws a card, and then he plays Graceful Charity. He draws three cards and discards two of them. He now has assembled the third piece of Exodia in his hand. Yugi activates his trap card, Light of Intervention. This trap card forces all monsters to be face up on the field. The Rare Hunter doesn’t care. To set up a defense, he summons Stone Statue of the Aztecs in defense. Yugi wonders what the Rare Hunter’s strategy is, since all he’s done is draw cards and play defense. Yugi’s turn begins. He sacrifices his monster to summon Berfomet, who is able to also summon Gazelle the King of Mythical Beasts. Yugi then activates one of his face down cards, Polymerization, to fuse his two monsters in order to form Chimera the Flying Mythical Beast. Because Chimera was fused this turn, he cannot attack until next turn. By next turn Yugi plans on wiping the field clean of his monsters. Joey tells Yugi that the Rare Hunter has a plan to take him down. He points to the evil grin on his face. Joey mentions something in the Rare Hunter’s hand, and the Rare Hunter quickly silences Joey again. So Yugi places one card face down and ends his turn. 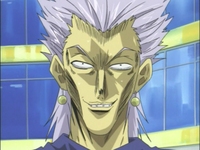 t’s the Rare Hunter’s turn again. He draws a card and predicts it will be another Graceful Charity. He’s right. He plays the card, allowing him to draw three cards and discarding two. The Rare Hunter now has four pieces of Exodia in his hand. Yugi wonders how he knows which cards he’s going to draw. Meanwhile, at Kaiba Corp., Kaiba notices that the Rare Hunter is dueling well against Yugi. He wants to know what kind of information his company has on him. One of Kaiba’s employees states that they have very little information. He added himself to the database only a week ago, and he calls himself Rare Hunter. Mokuba realizes that he hacked into their database, which is illegal. He wants to disqualify the Rare Hunter, but Kaiba stops him. Kaiba realizes that the Rare Hunters took his bait, and he’s interested to see how the duel will play out.

Back at the duel, the Rare Hunter is pleased how the duel has been progressing. He tells himself that with the help of some invisible ink and x-ray contact lenses, he is able to know which card he will draw next. He finds out that he will draw the final piece of Exodia, which when drawn, will automatically end the duel. The Rare Hunter grins and then summons Eargon the Moving Fortress in defense mode. With 2200 defense points, Chimera won’t be able to get through it. Then he ends his turn. Yugi tells the Rare Hunter that he eventually must attack in order to win. The Rare Hunter replies by saying he will attack when the time is right. Yugi’s turn begins again. Joey can’t stand watching Yugi fall to the hands of the Rare Hunter. Yugi tells Joey to stop and not reveal the Rare Hunter’s strategy. He explains to Joey that he is fighting for him because he is a friend. Yugi then tells the story about how Weevil threw his Exodia cards into the ocean back at Duelist Kingdom and how Joey dove into the ocean to save them. After telling the story, Yugi suddenly realizes that the Rare Hunter is planning on summoning Exodia. The Rare Hunter is shocked that Yugi found out his plan. However, the Rare Hunter is still calmed and says that nobody can stop Exodia. Yugi agrees, but in order to win the tournament, he must find a way to stop it. 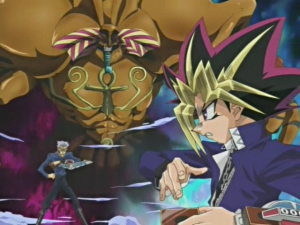