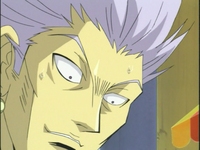 The duel between Yugi and the Rare Hunter continues. Joey is pleased that Yugi figured out the Rare Hunter’s strategy. He’s hoping that he will get his Red-Eyes black. Yugi now knows about Exodia, but his next task is figuring out a way to stop it. The Rare Hunter already has four Exodia cards in his hand, and he has a strong hunch that the final card will be his next draw. At Kaiba Corp., one of Kaiba’s employees informs him and Mokuba that the Rare Hunter is using cards that are coated with an invisible ink. Mokuba states that he’s cheating, and he plans to disqualify the Rare Hunter. However, Kaiba decides to let it slide. He thinks the Rare Hunter may have something that he wants, plus he wants to watch Yugi get beat by the same monster that destroyed him.

Yugi places one card face down, and then he attacks the Rare Hunter’s monster with Chimera. The Rare Hunter now only has one monster left. However, the Rare Hunter doesn’t care. His last Exodia card is only one turn away, and with Yugi’s turn over, he can now draw it. Just before the Rare Hunter draws his final card, Yugi plays a trap known as Time Seal. It prevents the Rare Hunter from drawing any cards and skips his turn, so the Rare Hunter cannot get his final piece. Yugi tells himself that he needs to find a way to beat the Rare Hunter. He hopes his deck has something to stop it, and so he draws a card. Yugi draws a card and then activates Lightforce Sword. This card randomly attacks one of the Rare Hunter’s cards and prevents him from using it for three full turns. Yugi cannot control which card gets attacked, so he hopes that it’s an Exodia card. Otherwise he will lose the duel. The trap penetrates Exodia’s Right Arm. Yugi grins. He then sacrifices Chimera in order to summon Summoned Skull. With 2500 attack points, Summoned Skull easily destroys the Rare Hunter’s last monster. Yugi states that Exodia may be unstoppable as a whole, but the five pieces that make it are easy prey. The Rare Hunter laughs wildly. He says that a professional duelist like himself is prepared for any situation. His turn comes, he activates Swords of Revealing Light, stopping all of Yugi’s monters from attacking.

It’s Yugi’s turn again. He draws a card. Unable to do anything, he ends his turn. The Rare Hunter laughs and states that Exodia cards are so rare that most duelists don’t own a single piece. However, his deck as three sets of Exodia, and the final piece he needs is in it somewhere. Yugi smiles and says that it is very unlikely that he will draw the card he needs because his deck isn’t balanced. A deck requires good balance in order to win. The Rare Hunter draws a card, and it ends up being Exodia’s head. It doesn’t help him since he already has a head piece in his hand, but in less than three turns Lightforce Sword will expire, giving him all five Exodia cards. Joey cheers Yugi on, saying that he still has a few turns left to win the duel. With that, Yugi’s turn begins. He draws a card and places it face down. Then he summons Alpha the Magnet Warrior in attack mode. The Rare Hunter reminds Yugi that he cannot attack, but Yugi has a plan. He tells the Rare Hunter that he is defenseless, and the only thing stopping his monsters are the Swords of Revealing Light. Once they expire, his monsters can freely make a direct attack. Also, with only Exodia cards in his hand, the Rare Hunter cannot do much to defend himself.

The Rare Hunter grunts and then makes his move. He draws a duplicate piece of Exodia. He questions Yugi’s words and wonders if Yugi can discover a way to destroy his Swords of Revealing Light. He knows that each Exodia card counts as a monster too, so he summons a duplicate Exodia’s Head in attack mode. That will protect his life points from direct attacks. Yugi smiles and tells the Rare Hunter that he fell right into his trap. He activates the trap card Chain Destruction. This card destroys the Exodia Head cards in the Rare Hunter’s deck and hand. Without those cards, he cannot successfully summon Exodia. The Rare Hunter is shocked that Yugi was able to stop the unstoppable Exodia. Yugi, now with the upper hand, says that he has also found a way to destroy Swords of Revealing Light. He activates his second face down card, Dust Tornado. It destroys Swords of Revealing Light, allowing Yugi’s monsters to attack. Next, Yugi plays Monster Reborn to revive Chimera. Chimera destroys the Rare Hunters last line of defense, leaving him defenseless. Then Yugi uses Summoned Skull’s electricity to boost Alpha the Magnet Warrior’s attack points by 200. With 4100 attack points altogether, Yugi wipes out the Rare Hunter and wins the duel. 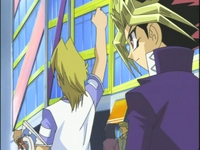 Everyone cheers for Yugi’s victory. Even Mokuba is surprised that Yugi was able to defeat Exodia. Kaiba, on the other hand, remains calm and says that he holds a card that even Yugi won’t be able to beat. He decides to head over to Battle City, and Mokuba follows him. With the duel over, Yugi goes through the Rare Hunter’s deck and finds Joey’s Red-Eyes Black Dragon. He then notices something rubbing off the cards. Yugi finds out that the cards have been marked. He tears up all of the Rare Hunter’s cards and tosses them away.

Suddenly, the Rare Hunter begins to speak. He says things like, “Please Master, don’t be angry!” and “I tried my best.” Joey thinks that the Rare Hunter is going crazy. The Millennium symbol suddenly appears on the Rare Hunter’s forehead and he becomes a puppet from the same mystery outsider that controlled Bandit Keith. He congratulates Yugi for defeating his Rare Hunter, although he was the weakest of his minions. He then says that he has been waiting for the Pharaoh for many years and that he has taken control of the Rare Hunter’s body. Yugi asks how he is able to do that, and the outsider states that his Millennium Rod allows him to do that. Yugi assumes that this is the great evil that Ishizu was referring to. The outsider then introduces himself as Marik. Yugi asks Marik what he wants, and Marik explains that he wants the Pharaoh’s power. He plans on seizing that power by using the three Egyptian God cards. Yugi has no idea what he’s talking about, so Marik explains the story about the Gods and how powerful they are. Yugi tells Marik that he will stop Marik no matter what happens, and Marik just laughs. Then he leaves.

Yugi hands Joey back his Red-Eyes Black Dragon. Joey stares at the card and tells Yugi to keep it. He knows that Yugi will need all the powerful cards he can get in order to beat the Rare Hunters, plus the card can act as a sign of friendship. Joey explains that back at Duelist Kingdom, Yugi taught him all the rules, strategies, and everything else he needed to know in order to make it to the finals. So Joey wants to help Yugi out for a change. Plus, he has another rare card: Time Wizard. Joey states that Time Wizard has helped him so much back at Duelist Kingdom, and he knows it will come in handy again at Battle City. So with Red-Eyes Black Dragon now in Yugi’s deck, the two friends shake hands, and they go their separate ways to find more duelists. 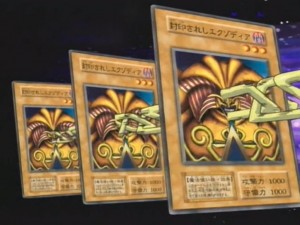 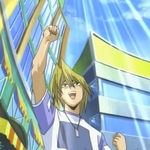