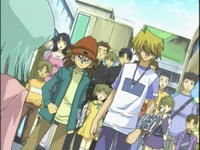 Joey is walking around Battle City looking for some duels. He immediately finds one with a group of people, so he decides to check it out. The duel is between Espa Roba and Rex Raptor. Rex has his Serpent Night Dragon on the field, but Espa Roba has him trapped, saying that he knew Rex would play that card. Rex wonders how Espa Roba knew he was going to play that card, and Espa Roba replies that he is psychic. Then he has Jinzo finish the dragon off. Rex Raptor’s life points drop to zero, and he loses. Rex didn’t believe the rumors about Espa Roba having ESP, but now he does. Due to Battle City rules, Rex hands over his locater card and Serpent Night Dragon to Espa Roba. He hopes Espa Roba takes good care of it.

Espa Roba then asks the crowd who wants to duel him next. Everyone in the crowd thinks Espa Roba can really read the minds of others, so they back away. However, Joey is clueless about Espa Roba’s strategy, Espa Roba challenges him to a duel. Rex tells Joey to stay away, since Espa Roba will just use mind control. According to his rulebook, Joey never backs down from a challenge, and he loves dueling people with crazy techniques. So he accepts Espa Roba’s challenge. Espa Roba recognizes Joey as the runner-up duelist at Duelist Kingdom, and he is honored to try his skills on Joey.

At the hospital, Serenity hears someone knocking on her door. It’s Tristan. He walks in the room with a surprise for her: a laptop. Since Kaiba is streaming the entire tournament live on the Internet, Tristan can watch the duels and give the information to Serenity. Serenity thinks it’s a great idea because now she can keep up with Joey’s progress. So Tristan opens up the laptop. However, he doesn’t even know how to turn it on! He tells himself to stay calm.

Meanwhile, Téa is walking all over Battle City to find Yugi. It’s already Day Two of the tournament, and she still has no luck in finding him. Yugi is busy walking down an alley in search of opponents. He sees two kids running by, screaming that Joey is taking on Espa Roba, the duelist with ESP. This intersts Yugi.

So, before the duel starts, Espa Roba states that he will hand over his powerful Jinzo if he loses, and Joey will hand over his Time Wizard. Joey agrees, and the two duelists fire up their duel disks. They each gain 4000 life points, and the duel begins. Joey begins by drawing his five cards and viewing his hand. He is impressed with what he has so far. Back at the hospital, Tristan has the nurse helping him out with the laptop. The nurse finds Joey’s duel on the Internet. Tristan reports to Serenity that the duel is about to start and that it is his turn. Serenity hopes that Joey wins.

Joey is about to summon a monster when he sees Espa Roba doing some crazy act. Espa Roba is calling to the powers of the universe to let him see the cards in Joey’s hand. After performing his act, he tells Joey that he is toast. Joey ignores Espa Roba’s act and continues with his move. He summons Giltia the Dark Knight. Espa Roba says that Joey made a bad move, and the crowd agrees. Joey begins to get worried about this. Rex tells Joey that he broke one of the Battle City rules by playing a monster with five stars. Forgetting about the sacrifice rules, Joey tries to cover up his mess-up. Espa Roba then puts on his act again and states that the top card in Joey’s hand is Swordsman of Landstar. Joey looks at his hand and finds out that Espa Roba is correct. He truly wonders whether or not Espa Roba really has ESP. Joey claims that it’s all a scam. Espa Roba disagrees.

It’s Espa Roba’s turn now, and he summons Cyber Raider in attack mode. Because Joey has no monsters on the field, Cyber Raider inflicts a direct attack to Joey’s life points. With 1400 attack points, Cyber Raider lowers Joey’s life points to 2600. Tristan wonders what Joey is doing. It’s only been the first turn, and he’s already losing! Serenity asks Tristan how Joey is doing. Tristan thinks for a minute and states that Joey is totally winning. He adds in that Joey was the runner-up at Duelist Kingdom and is going all the way to the top. Serenity thanks Tristan, and Tristan sighs and hopes Joey really does win.

Yugi is on the rooftop of a building watching Joey’s duel. He hopes Joey wins but suspects that Espa Roba’s tricks are a fake. Yugi hears a voice coming from the same rooftop and looks. He sees a group of kids with binoculars and a radio. They are spying on Joey’s cards and feeding the information to Espa Roba. One of them tells Espa Roba that he has a Graceful Dice in his hand. So it’s been confirmed that Espa Roba is a fake. It’s Joey’s turn again, and he draws Graceful Dice. The group of spies reports that information to Espa Roba. Espa Roba goes into his act again and states that Joey picked up another Graceful Dice. Yugi knows that Joey can beat him, even though he’s cheating. Joey senses something suspcious with Espa Roba. Espa Roba told him that he picked up a second Graceful Dice, but he’s wrong. Joey only has a Graceful Dice and a Skull Dice. Joey thinks it’s time that he performs a few tricks of his own.

So Joey summons Swordsman of Landstar in attack mode. He then places two cards face down and ends his turn. Espa Roba predicts Joey placed both of his Graceful Dice cards face down. He tells Joey that the rules state that he can only use one Graceful Dice a turn, so his strategy won’t work. Joey grunts and tells himself that Espa Roba is in for a big surprise, and his trick will prove the fraud Espa Roba is. It’s Espa Roba’s turn now, and he sacrifices his Cyber Raider to summon Fiend Megacyber. With 2200 attack points, it has more than enough strength to destroy Joey’s monster. So Joey activates his Graceful Dice magic card. He needs a five or higher in order to destroy Fiend Megacyber. The dice rolls, but it lands on a three! So Swordsman of Landstar’s attack points only jump to 1500. With that done, Espa Roba calls out the attack. Joey reminds Espa Roba about his other face down card. Espa Roba tells Joey that he cannot activate another Graceful Dice. Joey flips his card face up, and it’s Skull Dice. Espa Roba thinks it’s a trick. The dice rolls and lands on a five. Fiend Megacyber’s points drop to 440, making it a vulnerable target. Swordsman of Landstar attacks and destroys Espa Roba’s monster. His life points are dropped to 2940.

Joey tells Espa Roba that his entire ESP trick is a fraud. He knows that Espa Roba has friends telling him what his cards are. The problem is that Espa Roba’s friends couldn’t tell the difference between his Graceful Dice and Skull Dice since he held them together. With that said, Espa Roba has a scared look on his face, and Rex calls him a cheat. Back at the rooftop, Mokuba finds Espa Roba’s friends and catches them. As the Battle City commissioner, Mokuba states that he will disqualify their brother. Espa Roba’s siblings plea to Mokuba not to disqualify him because their brother is means the world to them and protects them from bullies. Mokuba recalls his brother doing the same thing. Mokuba tells them that it’s still cheating. He sees Yugi and wonders what he would do. Espa Roba’s brothers plea to Mokuba to give their brother one last chance to duel legit. So Mokuba decides to give them that one last chance.

Téa is sitting on a bench wondering if Yugi’s okay or not. She recalls Ishizu’s words about him needing to save the world. She says that Yugi will never be alone in this and that his friends are with him 100% of the way. 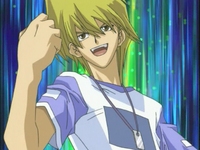 Espa Roba denies the fact that he doesn’t have psychic powers, but Joey knows the truth. They decide to continue the duel. Espa Roba places one card face down on the field and ends his turn. Joey notices that Espa Roba has no monsters on his field, so he just needs a good monster to attack with. Joey draws one card, and it happens to be Alligator Sword. With 1500 attack points, it’s the perfect card Joey needs. So he summons it onto the field. With both of his monsters at 1500 attack points each, he will win the duel if his attacks are successful. Joey has his Alligator Sword attack Espa Roba directly. The attack works, and his life points drop to 1440. Tristan cheers and tells Serenity that Joey only needs one more move in order to win. Yugi hopes that Joey is careful and can keep up with his defense. Joey orders his second monster to attack. Espa Roba activates his trap card, Mind Control. The trap brainwashes his Swordsman of Landstar, and it becomes his monster now. Joey wonders why Espa Roba decided to use his trap on his Swordsman instead of Alligator Sword. Finally, he understands that Espa Roba wants to sacrifice Swordsman of Landstar. Joey has a trap in his hand, and he plans on using it when Espa Roba summons his new monster. He places it face down and ends his turn.

Espa Roba begin his turn. He sacrifices Swordsman of Landstar to summon Jinzo. Jinzo’s special ability allows it to destroy all of Joey’s traps. So it destroys the one trap Joey had laid on the field. Espa Roba forsees Joey’s defeat, and when he loses, he’ll be out of the tournament. Joey knows that he can’t let Espa Roba win. 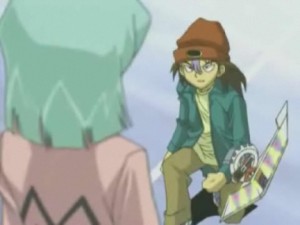 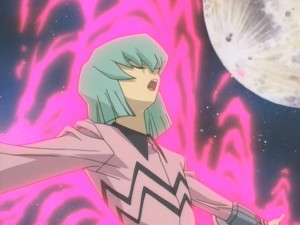