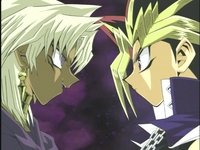 Yugi and Marik/Strings continue the duel against each other. Mime Strings has two Slime Tokens on the field already, and Yugi is trapped in the Nightmare Steel Cage. Only one more Slime Token is needed until Strings can summon his Egyptian God card. Yugi exclaims that the heart of the cards will guide him to victory. Marik says that Yugi’s beliefs will mean nothing when his Egyptian God card is on the field. Meanwhile, Kaiba’s crew is searching for the two remaining Egyptian God cards with the Kaiba tracking system. Kaiba asks one of his crew members if any of the Egyptian God cards have been played. The employee tells him that none have been played yet. Kaiba is surprised by this, but Mokuba reassures him that their tracking system will pick up any trace of the Egyptian God cards. Kaiba wants to find the God cards for himself, so that he can once again be the world’s great duelist. Kaiba then walks away, and Mokuba follows him with his briefcase.

Marik says that history may be on the Pharaoh’s side, but destiny is on his side. Once Marik possesses Yugi’s Millennium Puzzle, he will only need to obtain one more Egyptian God card. Then he will be able to claim the power of the Pharaoh for himself. Yugi wishes he knew more about his ancient past, but for now he cannot let Marik win. So Yugi draws a card. Because he cannot attack, Yugi ends his turn. Strings’ turn begins, and the third Slime Token is produced. Now Strings can summon his Egyptian God card! The sky goes black, as heavy clouds form in the sky. Lightning clashes with the ground, and the three Slime Tokens and Jam Breeding Machine are sacrificed. The Egyptian God card, Slifer the Sky Dragon, is summoned onto the field. Marik tells Yugi that it’s the last monster he will ever see.

Marik explains that Slifer the Sky Dragon is one of the most feared monsters ever and that it cannot be beaten. Yugi says that all cards have weaknesses. Marik says that Yugi is in no position to pose threats. He’s faced against a monster who’s power is limitless, and it’s attack strength will just go stronger. Yugi replies, “Stronger, but how?” So Marik explains that Slifer’s attack strength depends on the number of cards the cardholder has. Since Strings has two cards in his hand, Slifer has 2000 attack. Yugi states that his monster is stronger than Slifer. Strings plays Pot of Greed, giving Strings two brand new cards. With three cards in Strings’ hand, Slifer now has 3000 attack points. Yugi says that there is a limit to the amount of cards a player can hold, so Slifer’s strength is still limited. Marik says that every rule is meant to be broken, for in Strings’ hand is a card that can change all of that.

Yugi tells himself that his Buster Blader receives 500 additional points for every Dragon-type monster on the field. Right now Buster Blader has 3100 attack points, which is more than Slifer’s strength. However, Yugi is still in the cage, so he cannot attack, and it may be too late when he gets out of it. Marik reminds Yugi that his Egyptian God card will have 4000 attack points next turn, which is more than enough to wipe out Buster Blader. Marik wants Yugi to just hand over his puzzle, but Yugi says, “Never.” Yugi puts trust in his deck and draws. He draws Lightforce Sword, stating that it may be able to help him. Yugi exclaims that it’s not over yet. Marik thinks Yugi is just prolonging his defeat. So Yugi places two cards face down, summons Kuriboh in defense mode, and ends his turn.

Now that Yugi’s turn is over, Nightmare Steel Cage evaporates. Now Yugi is vulnerable to Slifer’s attacks! Strings draws a card, increasing Slifer’s attack to 4000. Now it has more attack points than Buster Blader. Marik orders Slifer to attack. To counter that attack, Yugi activates his Trap card, Lightforce Sword. This Trap card removes a random card from Strings’ hand for the duration of the turn. Now Slifer’s attack decreases to 3000, and Buster Blader can destroy it. However, Revival Jam and Jam Defender are still in play, and Revival Jam blocks the attack. Strings plays a Magic card called Card of Safe Return. Now, every time Revival Jam revives itself from an attack, Strings can draw three new cards. With three new cards, in Strings’ hand, Slifer has 5000 attack points.

Meanwhile, Joey, Tristan, Téa, and Grandpa are looking for duelists for Joey. One duelist passes by, but Joey ignores him. Tristan says that Joey should have challenged him, since he would be easy to beat. Joey only needs two more locater cards, and he’s in the finals. Joey says that he doesn’t want to duel anyone who is inexperienced because he has a reputation to keep. Since he did come in second place at Duelist Kingdom, a lot of pressure has been put on him. Plus, Joey wants to find someone tough to duel, since he has been doing well in the tournament so far. Grandpa compliments Joey for doing well so far, but he reminds Joey that a duelist always has more to learn.

Suddenly, Kaiba walks by the group. He wants to know why an amateur like Joey is wearing one of his duel disks, since he never sent an invitation to him. Kaiba says that he will deal with Joey later, but Joey hears a challenge. He demands Kaiba to challenge him. Tristan, Téa, and Grandpa think that it’s a bad idea. Kaiba turns around. Mokuba says that Joey would be a waste of his brother’s time. However, Kaiba accepts Joey’s challenge, so that he can shut Joey up. The two duelists face each other. Suddenly, a gust of wind appears. One of Kaiba’s choppers lowers down to the ground. The crew reports to Kaiba that an Egyptian God card was played five minutes ago, and that they will fly him to the scene. A rope ladder falls, and Kaiba and Mokuba grab onto it. Kaiba tells Joey that it’s his lucky day, and he leaves. Joey thinks Kaiba is just cowarding out and that it’s his lucky day. Téa tells Joey that he’s safe. However, behind an alley is a Rare Hunter, who has been following the group for some time.

Kaiba has just received more information that the Egyptian God card was played in a duel involving Yugi. Kaiba tells Mokuba that he has a plan. Back at the duel, Slifer the Sky Dragon attacks Buster Blader and destroys 1900 of Yugi’s life points. Now with only 2100 life points left, Yugi needs to find a way to win the duel. Marik says that there’s no way Yugi can win. Yugi cannot attack because Revival Jam will just block it. Thanks to Card of Safe Return, each time Revival Jam does block an attack, he will draw three cards, increasing Slifer’s strength. Yugi tells himself that none of his monsters are strong enough to face up against Slifer, so he needs to draw a good Magic card. Yugi draws a card, and it happens to be Magic Cylinder. Magic Cylinder can only be used with a Magician monster, and luckily he has Dark Magician Girl! So Yugi sacrifices Kuriboh and summons Dark Magician Girl in defense mode. As soon as Dark Magician Girl is summoned, Slifer’s second ability activates. Marik explains that Slifer can use its second mouth to inflict 2000 points of damage to a monster that has just been summoned on the field. Since Dark Magician Girl only has 1700 defense points, it will be destroyed. Yugi exclaims that he must save Dark Magician Girl. 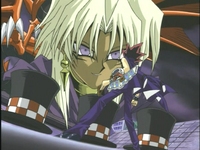 Slifer’s attack goes through, but Yugi quickly activates his Magic card Magical Hats just in time. So Slifer’s attack only destroyed an empty hat, leaving three hats left. Yugi then places two cards face down inside the hats. Strings’ turn begins again. Strings plays the Magic card Infinite Cards. This card allows Strings to hold as many cards as he wants, making increasing Slifer’s power even more. Marik has Slifer attack the right hat. The right hat does contain the Dark Magician Girl, but it also contains two traps: Spellbinding Circle and Magic Cylinder. Yugi uses Spellbinding Circle to weaken Slifer’s power, and then Magic Cylinder absorbs Slifer’s attack and redirects it back at it. However, Revival Jam blocks the attack. Yugi is surprised that Revival Jam can even block redirected attacks. Because Revival Jam regenerated itself, Strings draws three cards. Plus he draws one more card because it’s the beginning of his turn. Now Slifer has 8300 attack points! Yugi states that Slifer is unstoppable. Marik agrees, and since Spellbinding Circle’s effect has expired, Slifer gains back 700 attack points, bringing its strength up to 9000! Then Slifer destroys Dark Magician Girl.

Marik states that his ultimate five-card combo will make Yugi lose the duel. Yugi falls to his feet pondering how he can defeat such a beast. Suddenly, Kaiba tells Yugi, “Get on your feet!” Kaiba orders Yugi to get up and stop embarrassing himself. He wants Yugi to defeat Strings and win his Egyptian God card. All Yugi has to do is figure out its weakness. Kaiba secretly plans on figuring out Slifer’s weakness from Yugi. Then he will strip Yugi of Slifer and have the most powerful deck in the world! 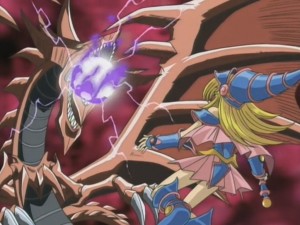 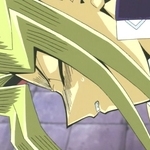 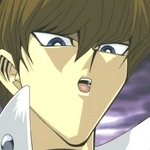 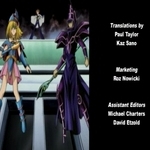