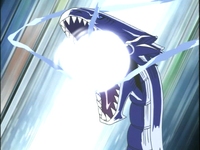 Kaiba has just summoned his all powerful Blue-Eyes White Dragon. Yugi tells the Rare Hunters that he and Kaiba make a great team with their combined strengths. And when they win, the Rare Hunters will lead them to Mokuba and the others. Kaiba hopes Yugi isn’t still relying on the teamwork thing because it was his superior skills that brought them to where they are now. He plans to win the duel himself and save Mokuba. Yugi exclaims that this isn’t only about him – his friends are in danger too. Kaiba replies that that’s not his problem. Yugi says that Loomis and Umbra still have the upperhand in the duel, and Loomis agrees. Their Masked Beast monster still has 200 more attack points, which means that if Blue-Eyes attacks, it will instantly get destroyed. Yugi tells Kaiba to attack with Blue-Eyes. Kaiba thinks that this is some trick, since his Blue-Eyes would be destroyed, but Yugi promises to back Kaiba up. Because Kaiba knows Yugi would lose if his plan fails, he decides to attack. Blue-Eyes fires its White Lightning attack at Masked Beast, and it successfully destroys it. Loomis and Umbra cannot believe what just happened. Masked Beast was stronger than Blue-Eyes, so they must have cheated! However, Yugi explains that when he sent his Beast of Gilfor to the graveyard, he activated its special ability. It allowed Yugi to lower the attack strength of any monster on the field by 500 points, and he chose Masked Beast. So with only 2700 attack points, Masked Beast was an easy target for Blue-Eyes. Yugi tells Kaiba that he needs his help more than he thinks. Kaiba thinks Yugi is just stealing all of the glory, but it was his Blue-Eyes that did all the work! Nevertheless, Kaiba plans on crushing the Rare Hunters during his next turn.

Loomis begins his turn. He laughs as he draws his card. He places the card in face down defense and then sets two cards face down. That ends his turn. Yugi wonders what his plan is. Loomis chuckles to himself, as when his two face down cards are activated, Kaiba’s Blue-Eyes will be destroyed. Before Yugi can begin his turn, he loses 1000 life points thanks to Mask of the Accursed and Mask of Dispel, bringing his life points down to 1500. Yugi then draws a card. He decides to take a chance by attacking Loomis’ face down defense monster. It could do him well, or it could cause Loomis to activate a trap. So Yugi sets a card face down and then summons Alpha the Magnet Warrior in attack mode. Then Yugi orders his monster to attack. Loomis tells himself that he can’t waste his Trap card on Yugi’s monster, so he allows his face down defense monster (Melchid the Four-Faced Beast) be destroyed. Loomis grumbles as he says that they have to take back control of this duel. Umbra tells Loomis through his transmitter that they don’t have any monsters on the field, and if Blue-Eyes attacks, they are done for. Loomis replies back that he has everything taken care of. Umbra says, “Very well.”

Meanwhile, back at the warehouse, Mokuba and Téa are still trapped in the room. Mokuba wishes there was a way he could get in touch with Kaiba and let him know where they are. Unfortunately, the Rare Hunters took his laptop away. Téa looks at the small opening that she tried to escape through. She says that there might be a way for Mokuba to escape. Joey is in another room tied to a chair. Soon, Odion walks into the room. Joey wonders what they want with him. Odion says that he will find out soon, but right now he wants Joey to be quiet. Joey makes threats to Odion. Odion responds by raising his hand towards Joey. Suddenly, Marik appears from the corner of the room and takes control of Joey’s mind.

Mokuba and Téa have stacked a bunch of cardboard boxes to the top of the opening. Mokuba has reached the top, but Téa isn’t quite there yet. She tells Mokuba that she hears voices coming. Three Rare Hunters bust into the room. The see Mokuba and Téa trying to escape, and they begin to climb the stack of boxes. Eventually, the boxes fall over, taking the Rare Hunters and Téa with them. However, Mokuba has reached the top. Téa tells Mokuba to go on ahead without her and get some help. So Mokuba leaves. Two of the Rare Hunters grab onto Téa and the third runs out to find Mokuba. Téa hopes Mokuba can get some help because everything relies on him now.

Back the the duel, Umbra begins his turn. He draws and then summons Rogue Doll in attack mode. Kaiba mocks Umbra, since he summoned a doll, and one with low attack points. Yugi wonders why Umbra summoned a monster with low attack points. The Rare Hunters must be up to something! Umbra orders his Rogue Doll to attack Blue-Eyes White Dragon. Kaiba thinks this will be amusing, since he knows his Blue-Eyes will win. However, Loomis activates his Trap card, Mask of Weakness. He attaches it to Blue-Eyes, and it lowers Blue-Eyes’ attack points by 700 points. Then Loomis activates his second face down card, Mask of Brutality. This Magic card strengthens Rogue Doll by an extra 1000 attack points, making it stronger than Blue-Eyes. However, Yugi activates his Trap card, Mystical Rift Panel. This card transfers the effect of Mask of Brutality to Blue-Eyes, increasing its attack to 3300. Now it’s stronger than Rogue Doll. Kaiba orders Blue-Eyes to attack. While Blue-Eyes destroys Rogue Doll, Kaiba realizes that his monster would have been destroyed if Yugi hadn’t helped him. Kaiba finally admits that he may need Yugi’s help after all in order to defeat the Rare Hunters, but it will be his superior dueling skills that will lead them to victory.

So Rogue Doll gets destroyed, and Umbra’s life points decrease to 2000. Loomis and Umbra begin to argue because Blue-Eyes took down another one of their monsters. Yugi thinks that their arguing could cost them the duel. He states that the most important thing in a double duel is teamwork. Umbra tells himself that he can’t rely on anyone anymore except for himself. So he places one card face down and ends his turn. 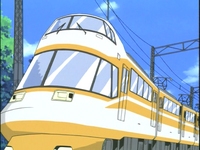 Meanwhile, Tristan and Serenity are running towards the train. They make it inside the train just inside, as the doors of the train close. Tristan asks Serenity how she’s feeling. Serenity says good, but she is still feeling a little bit nervous. Tristan reassures her that everything will be fine.

It’s Kaiba’s turn, and he has no other intention except to destroy Umbra. So he orders his Blue-Eyes White Dragon to attack him. Yugi thinks Kaiba is making a hasty move. Kaiba didn’t even think about Umbra’s face down card. He could be falling into a trap! And it turns out he is. Umbra activates his Trap card, Mask of Impregnability. This card protects Umbra from direct attacks for one turn. Kaiba smiles and asks Loomis what would happen if his Blue-Eyes attacked him. Would Umbra have used his Magic card to save him? Kaiba states that depending on others is a problem and the only person who you can trust is yourself. Loomis begins to sweat. Umbra tells Loomis not to listen to Kaiba. Umbra says that he would’ve used his Magic card on Loomis, even though Loomis probably wouldn’t have done the same thing to him. Yugi begins to see Kaiba’s plan. Kaiba must have seen Loomis and Umbra doubt each other’s loyalty, so he’s taking advantage of that. Loomis thinks Kaiba might be right. He thinks Umbra is just trying to take all the credit for winning the Egyptian God cards. This makes Loomis mad, so he plans to just take Yugi and Kaiba out himself.

On the train, Serenity thanks Tristan for all of his help. Tristan says that he was glad to help out and there’s nothing else he would rather be doing. Serenity blushes and says how awesome it is to have a friend like him. Tristan sighs since Serenity still only considers him as a friend and nothing more.

Meanwhile, Téa has been locked in chains in a chair. Joey stands right in front of her. She cries out for help to Joey, but Joey doesn’t respond to her. Téa tells Joey to stop joking around. Suddenly, Joey replies, “I am not Joey you fool!” Odion walks up behind Joey, and Téa wonders what Odion did to him.

Loomis begins his turn. He activates Pot of Greed, allowing him to draw two more cards. Loomis’ hand doesn’t look very promising. He won’t last long if he gets attacked by Blue-Eyes White Dragon. So Loomis sets one card face down and activates a Magic card, Card Exchange. This card allows Loomis to exchange his hand with any player, and he chooses Umbra. Loomis says that since Umbra won’t help him with his cards, he’ll just take the cards instead. So Umbra hands his entire hand to Loomis. Then Loomis activates a Magic card from the field. It’s called Chosen One, and if it works, Yugi and Kaiba are finished. Loomis first begins by setting three cards on the field face down, two of which are Magic cards. Loomis explains that if the chooser chooses one of his Magic cards, all three cards go to the graveyard. But if it selects the third card, he can summon a powerful monster onto the field without sacrificing. The chooser spins around and around. After a few moments, it begins to slow down, and then it points to a card. The card is in fact Loomis’ monster card, and he is now able to summon it. Loomis summons Des Guardius, a monster with 3300 attack points!

Kaiba exclaims that the monster is stronger than his Blue-Eyes White Dragon. Loomis agrees and states that neither Yugi or Kaiba stand a chance against it. Yugi begins to sweat. He must defeat their monster, or he may never see his friends again. The only question is who should Loomis’s monster attack first? He could attack Yugi and destroy one of his weak monsters, or he could attack Kaiba and destroy Blue-Eyes. Umbra says it doesn’t matter who gets attacked first. In the end they both will be destroyed! 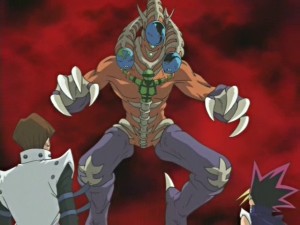 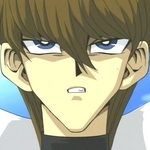 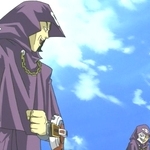 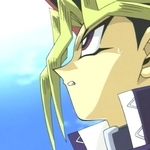 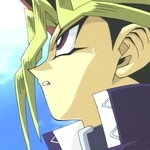 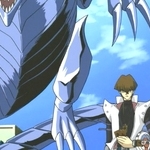 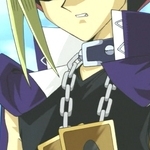 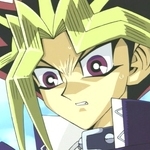 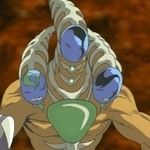 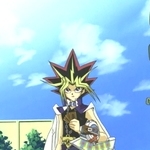 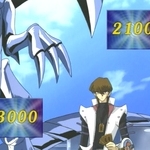 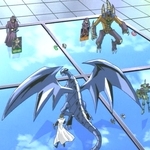 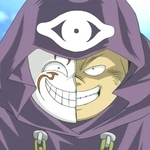 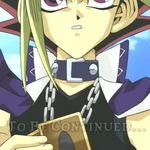 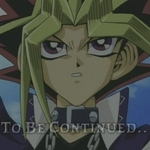 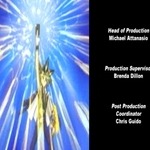 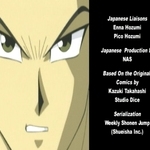 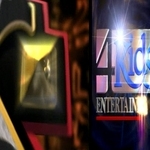