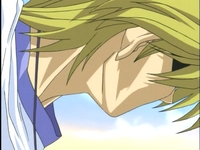 Yugi has just given Joey his Millennium Puzzle. That puzzle symbolizes the bond Yugi and Joey have together. In about 20 minutes, the anchor will fall, so Yugi hopes Joey can come to his senses before that. Yugi gave Joey his Millennium Puzzle just like how Joey gave him Red-Eyes Black Dragon. Yugi knows that his bond with Joey is stronger than Marik’s power. He has already seen signs of Marik’s power weakening. Marik may be able to control Joey’s mind, but he can’t control Joey’s heart.

Joey tries to fight Marik’s control even more now that he has the Millennium Puzzle. Marik tells Joey to ignore him. He says that Yugi is the enemy and he is the master. Unfortunately for Marik, the puzzle is useless to him right now. In order for him to use its magic, Marik must win it in a duel. Marik then wants Joey to throw the puzzle into the ocean, so that it’s gone from the duel. Then he will get one of his Rare Hunters to fish it out of the sea. Joey is back under Marik’s control. He takes the puzzle in one hand and takes a piece of the puzzle. However, before Joey can throw it out, Yugi tells Joey to wait. Joey remembers the time where he threw a piece of Yugi’s puzzle back at school. Still, Yugi defended him and Tristan from a bully, and soon they all became best friends. Everyone watches in horror as Joey stands there holding the puzzle piece in his hand. He doesn’t want to throw the piece of the puzzle into the ocean. Joey falls to his knees and tries to fight Marik’s power. Marik notices that he’s losing his grip again. With all his might, Joey places the piece back into the puzzle and hangs it on his neck again. Marik is frustrated that Joey is fighting him, but he gains control again and orders Yugi to continue the duel. However, Yugi better act fast because there is only 14 minutes left until the anchor falls, bringing Yugi and Joey with it.

With 1000 life points left, Yugi begins his turn. Since Joey’s turn is over, Red-Eyes gains the 500 attack points that it lost. Now Red-Eyes has 900 points. Yugi has drawn Beta the Magnet Warrior. Yugi realizes that when Joey attacked Red-Eyes Black Dragon, the real Joey broke through Marik’s spell. In order for Yugi to win, that same thing must happen again. However, Red-Eyes is weak, and if it gets attacked, he could lose the duel. So Yugi sets two cards face down and summons Beta the Magnet Warrior in attack mode. Then Yugi ends his turn. Marik wonders what Yugi is doing. He could have attacked, but instead he ended his turn! Joey draws Panther Warrior on his next turn. Marik knows that Panther Warrior has enough power to destroy Red-Eyes and wipe out the rest of Yugi’s life points. Joey tells Yugi that it’s time for him to wipe out his life points. Yami tells Yugi that he’s losing him; Marik’s power is getting stronger!

Marik is losing his patience with Joey. According to Marik, Joey likes to disobey him and disrespect his power. However, Marik says not to underestimate the power of his Millennium Rod. He just needs to keep Joey’s mind in his control long enough until Yugi is destroyed forever!

Meanwhile, Tristan, Serenity and Duke are traveling through the streets of Battle City in search of Joey. Serenity is a bit worried of Joey. She hopes that he’s okay. Tristan says that everything is all right. Joey is probably on the way to the Battle City finals right now. Duke adds in that there is a chance that the Rare Hunters captured him. This makes Serenity worry even more. Tristan yells at Duke for hurting Serenity, so Duke immediately says that he’s probably already at the Battle City finals. The only problem is that they don’t even know where the finals are at. Their only hope is to find a duelist and hope that he/she already has six locater cards. Tristan spots a couple of duelists nearby and runs off to ask them a question.

Joey tells Yugi to make his pathetic move. Since his turn is over, Panther Warrior gains back the 500 points that it lost. Yugi says, “Big deal.” He draws a card. Then he sacrifices his Beta the Magnet Warrior and summons Beast of Gilford. Yugi orders Beast of Gilford to attack Rocket Warrior. When Rocket Warrior gets destroyed, Joey’s life points drop to 1700. Yugi asks Joey if he’s in there. Joey says no and that the real Joey is gone. Joey is also says that Red-Eyes is still weak. Yugi agrees since Red-Eyes only has 900 attack points. But he can’t let it get destroyed, since it may be the only thing that can save Joey from Marik! There’s only ten minutes left until the anchor falls.

Tristan talks to the duelists but finds out that they only have one locator card. He asks Duke if he has had any luck. Tristan sees Duke holding Serenity’s hand, and this makes him upset. He takes Serenity away from Duke and walks away. Suddenly, Tristan sees the Rare Hunters close by. The Rare Hunters spot Tristan and Serenity, and the chase begins again. Tristan quickly hands Serenity over to Duke. He tells him to run while he attends some unfinished business. Tristan runs back to meet up with the Rare Hunters. He clenches his fists, ready to fight them. Duke and Serenity cross a street. A car immediately stops in front of them, almost hitting Duke and Serenity. Mai Valentine, who is the driver of the car, tells them to watch it. Serenity pleas to Mai to help them.

Back at the duel, Joey hopes Téa is enjoying her front row seat. As long as no one interferes with the duel, she won’t get hurt, but he can’t say the same for Yugi. Yugi tells Marik that he won’t get away with this. Marik tells Yugi that he’s wrong. In less than ten minutes, the anchor will drop, bringing Yugi and Joey with it.

Meanwhile, Tristan has beaten up the three Rare Hunters. He asks one of the Rare Hunters where his friends are at. The Rare Hunter meekly responds that they are at the Domino Pier. Suddenly, Mai, Duke and Serenity show up in Mai’s car. Tristan greets Mai and then hops in. While Mai is driving, Tristan tells Mai about the Rare Hunters he saw earlier. Mai explains that based on Tristan’s description, he saw Rare Hunters, a group of criminals who lie, cheat, and steal rare cards. Tristan suddenly orders Mai to turn the car around. Mai shows Tristan her six locator cards. She is headed towards the Battle City finals and assumes everyone else is there too. Tristan tells her that Yugi, Joey, and the others are at the Domino Pier, so Mai sharply turns the car around and heads in the other direction.

Joey’s turn begins. He draws the Trap card, Skull Dice. Marik says that he may need it for later. Either way, Marik cannot lose. He’ll win if Yugi’s life points drop to 0, but he can also win if the timer runs out. Yugi and Joey will plunge deep into the sea, and Marik will be able to claim his prize: the Millennium Puzzle and Slifer the Sky Dragon. Joey asks Yugi if he’s ready to lose. Yugi tells Joey to snap out of it. He thinks bringing up more old stories will help. So Yugi tells Joey about their trip to Duelist Kingdom. He reminds Joey about how he was fighting for his sister Serenity so that she could gain back her eyesight. Joey weakly says, “Ser-en-i-ty.” Yugi tells Joey not to forget the promise he made to Serenity and not to forget the promise he made to him. Joey says, “I promise.” He promises to destroy Yugi in this duel. Joey places Graceful Dice and Skull Dice face down on the field and ends his turn. Marik steps on an ice cube on the floor and laughs. As soon as Yugi attacks, he’ll crush him. Yugi can try to reason all he wants with Joey. There’s no way he’ll be able to break the power of his Millennium Rod! 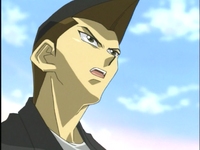 Mai and the gang are now closer towards the pier. Serenity is a bit scared, but Mai says that everything will be okay. Tristan sees something up ahead, and so Mai drives towards that direction. Joey reminds Yugi that in just over five minutes, the anchor will drop. Then he will get his prize of the Millennium Puzzle and his Egyptian God card. Mai soon makes it to the pier. She slams on the brakes, and everyone gets out of the car. Téa is glad that they found them. Mokuba runs up to Tristan and the others and tells them not to get any closer. He points to the crate hanging over Téa’s head. If anyone tries to interfere with the duel, the Rare Hunter will release the crate, and Téa will get crushed. Tristan finds that to be just sick. Mokuba then points to the dueling arena that is set up for Yugi and Joey. Everyone gasps as they stare at the arena. Tristan wonders what the anchor and chains are used for. He also wants to know why Yugi and Joey are dueling in the first place. Kaiba explains that Joey is on their side now. Mokuba adds in that Joey somehow lost his mind and his dueling for the Rare Hunters now. Whoever loses gets pulled to the bottom of the sea. Duke says that they have to stop this, but Mai says they can’t since Téa will end up getting hurt.

Serenity fears for her brother. She begins to take off her bandages. Téa tells herself that she can’t let Serenity see what’s happening. She shouts out to Serenity not to take her bandages off and trust her on this. Téa knows that Serenity gets her inspiration from Joey, and if the first sight she sees is Joey being possessed, she’ll never get over it. Mai rests her arm around Serenity and tells her that Yugi will stop it. Joey tells Yugi that he could let the timer run out, causing both duelists to lose, but that wouldn’t be any fun. So Joey begins his next turn. He draws the Magic card, Meteor of Destruction. Marik states that this is the perfect card that he needed. He orders Joey to play the card and destroy his best friend. Only one more move and Yugi will be gone forever, while Marik rules the world! 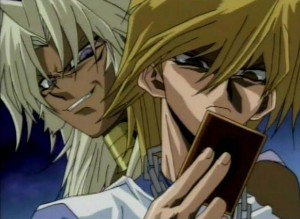 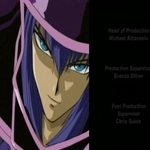