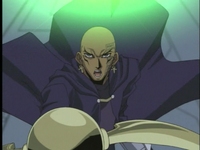 Odion insists to Marik that playing The Winged Dragon of Ra is too dangerous. Marik replies that Odion always wanted to be loyal to his family. Now this is Odion’s chance to prove himself by serving Marik, the future Pharaoh. Odion finally agrees that he will serve his duty. He recalls the time where he bowed down to Marik’s father in hope that he would spare Marik from misery. However, Marik’s father denied Odion’s request. Odion realizes that he must serve his master.

Téa doesn’t understand why Marik didn’t attack Joey. Yugi doesn’t know, but he has a bad feeling about something. Odion holds out his fake Millennium Rod and tells Joey to prepare himself, for he is about to play is Egyptian God card. Mai is worried because this could mean trouble for Joey. Odion explains that in order to play Ra from the arc, he must first sacrifice his Mystical Beast Serket. Then, once the temple is destroyed, he can release the most powerful creature that ever lived. Yugi shouts out to Joey to be very careful. Odion turns around and faces his temple. He calls out that he will sacrifice his Mystical Beast and half his life points to release his Egyptian God card. Marik says, “Excellent”, and a sharp grin appears on Kaiba’s face.

The lid to the arc opens, and the Egyptian God card rises from it. A bright light shines out into the sky, and soon light covers the entire arena. Ishizu sees the light from her window and realizes that the third Egyptian God card has been played. Huge claws appear from the clouds, and two red eyes awaken. The beast has finally arrived. Tristan exclaims that the beast looks unstoppable, and Yugi says that it is. Kaiba is happy that the final Egyptian God card is finally revealed. Odion reminds Joey that his Mystical Beast absorbed the attack points of his Jinzo, Insect Queen and Legendary Fisherman. Now those 5825 attack points have been transferred to Ra. As soon as Ra attacks, Joey will lose the rest of his life points!

Joey awaits for the attack. He tells Marik to take his best shot. Téa wonders what they do next. The last time Yugi’s Egyptian God card attacked, Bakura got injured badly. Marik is pleased that Odion is handling Ra very well. It just proves that Odion is truly a part of his family. Kaiba is happy that Joey served as his guinea pig. Now he can finally see what Ra can really do. So, Odion orders Ra to attack Joey’s life points directly. However, as soon as he calls out the attack, the Millennium items activate. Ishizu senses a great disturbance and states that Odion has angered the Gods. Marik wonders what’s going on. His duel disk emits a powerful aura, one of great rage. It’s almost as if the real Egyptian God card in Marik’s deck is angry that Odion used a counterfeit card.

Odion orders Ra to obey and attack Joey now. However, Ra doesn’t do anything. Tristan wonders why Ra isn’t attacking Joey. Yugi thinks something has gone wrong. Marik is stunned that The Winged Dragon of Ra isn’t working. Marik remembers his Rare Hunters extensively testing the counterfeit copies. He knows that his weaker servants couldn’t control Ra, but he was sure that Odion would be able to handle it well.

A storm erupts in the arena. Lightning clashes with the playing field. Marik thinks the rage from his Egyptian God card will strike everyone on board the blimp. Serenity tells Joey to get down from the arena. Ishizu sighs and wonders what Marik has done. Odion closes his eyes and states that he wasn’t worthy of controlling the card, just like how he wasn’t worthy of being a part of Marik’s family. Flashbacks go through Odion’s head as he says his final words. A bolt of lightning strikes Odion, and the Millennium Rod that he is holding falls into pieces. Yugi realizes that the Millennium Rod that Odion held was a fake. So he wasn’t the real Marik after all! Odion apologizes to Marik for his failure and then falls.

Joey begins to head towards Odion, but another bolt of lightning strikes him too. Joey falls to the ground. Serenity is shocked to see her brother hit. Tristan tries to run to his rescue, but Roland orders him to get down. Roland states that both duelists have 200 life points remaining, so the duel must continue. Kaiba states that the lightning is not part of his duel disk system and is simply an act of nature. Roland asks if he should call the duel a draw. Kaiba says that both duelists will get five minutes. Whoever can rise to their feet first will be declared the winner. Yugi exclaims that this is ridiculous! Meanwhile, Marik holds his hand to his head and suffers. Ishizu states that Marik has angered the Gods. Now everyone on board the blimp is in danger.

The gang continues to cheer for Joey. Roland states that there is only three minutes left. Once that time runs out, both duelists will be disqualified from the finals. Odion begins to open his eyes. Ishizu’s Millennium Necklace tells her that the evil inside of Marik may grow stronger. She remembers the day when Marik received the Tombkeeper’s initiation. It was a day that would completely change their lives, for when Marik received the initiation, an evil presence was born inside of him. However, now that Odion is down, Odion cannot protect Marik from this evil.

Odion realizes that he must get up. He doesn’t want to disappoint Marik again. So Odion begins to rise to his knees. Roland is about to call out the winner, but Odion suddenly falls again. Now that Odion is down and out, the gang continues to cheer for Joey. Roland reminds everyone that if neither duelists get to their feet in the next two minutes, they will both be disqualified.

Meanwhile, Joey is dreaming. Joey is in class, sleeping, when his friends wake him up. Téa tells him that this is no time to nap. Yugi exclaims that time is running out. Joey asks, “For what?” Yugi says that today is the most important duel of his life. Téa reminds Joey of the exact words he said before. Joey still can’t remember anything, so Tristan thinks preparing for his deck will help. Joey empties out his bag. His cards fall out, and Joey accidentally knocks down his deck. Téa wishes Joey would get serious. Yugi states that they should put together the best dueling deck possible and then head out. Kaiba appears from another corner of the classroom and tells Joey to just give it up. Joey shakes his fist at Kaiba. Tristan tells Joey to not even waste his time on Kaiba. Then Joey pulls out his decklist. While he hands it to Yugi, he notices Serenity and Mai are in the classroom with him. Mai tells Joey that he’s dreaming, and dreams don’t have to make sense. Serenity adds in that today is Joey’s big day, so they had to come.

Tristan pulls Joey to the side and states that they have a problem. He holds out Joey’s decklist, which is blank! Joey says that this dream keeps on getting weirder and weirder. He’s just glad that he’s not here by himself. Tristan asks, “Why?” Joey says that if his friends weren’t here, he’d be clueless. He mentions how he has the best friends a guy could ever have. Joey says that he has done some dumb things before, but his friends have always been with him. Yugi tells Joey that his deck is finally complete. He’ll be hard to beat with these cards! Joey wants to check them out, so Yugi hands the deck to him. Joey kisses his deck and states that there’s no way he can lose the duel.

Téa says that it’s time for them to head out. But there’s only one problem – Joey doesn’t have enough strength to stand up. Téa thinks Joey may be trying to get himself out of the duel. Mai tells Joey to stop joking around and get up. Joey claims that he’s serious. He needs a hand. And with that, all of his friends extend their hands to Joey. Joey thanks his friends. They pull him up to his feet.

Joey’s dream ends, and he finds himself standing up on the platform. The gang congratulates Joey for his victory. He’s the first one to get up, so he wins the duel. Joey is feeling kind of lost. Téa reminds him that he’s dueling in the finals. Mai yells at Joey for scaring them. Joey sees Odion on the ground. He remembers Odion’s card going nuts, but that’s the last thing he remembers. Roland declares Joey the winner of the duel. They all congratulate Joey, and Tristan runs up to the platform to throw his arms around Joey. Joey thinks Odion is still hurt and walks towards him. Kaiba tells himself that Joey’s dumb luck saved him again, and he emphasizes on the “dumb” part! Kaiba wonders what happened to Marik’s Egyptian God card. He knows there were no glitches in his duel disk, so the card should have worked – unless it was a fake!

Téa thinks that Namu lied to them all along. Marik states that “Namu” was only a disguise to get himself closer to Yugi. Joey calls Marik a “little worm”. Yugi says that this is the guy who brainwashed Joey. Marik is glad that he and the Pharaoh can finally meet face to face. Now he can finish the job that his pathetic servants couldn’t do! Suddenly, Marik’s dark side begins to emerge. Odion was afriad that this would happen. He explains that Marik has an even darker side, and he is no longer to contain it. Marik continues to struggle with his darker side until it finally takes complete control of him. 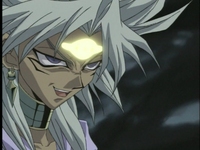 The Millennium symbol appears on Marik’s forehead. Marik says that he is now free, so he can do things his own way. Marik says that for many years, he was restrained by Odion. Yugi demands to know who he is. Marik states that he is the true Marik, and he will finish the job that his weaker side couldn’t do. Soon, he will strip the Pharaoh’s power, and the Millennium Puzzle will be hanging around his neck. When Marik is done with Yugi, Yugi and his friends will be trapped in the Shadow Realm forever!

Joey tells Marik to get a life. Marik replies that he now has a life thanks to Odion’s failure. However, Odion did prove one thing: only the chosen few can control the Egyptian God cards. Kaiba states that he’s sick of hearing this Egyptian fairy tales. The only reason he can control Obelisk the Tormentor is because he’s a master duelist. Marik tells Kaiba not to deny his ancient past. His role in this game is far greater than he thinks. But that won’t matter once he takes over. Ishizu realizes that her necklace was correct. The deeper evil that was hidden inside of Marik has finally arrived, and the goodness inside his heart is only a small spark.

Marik tells Yugi that the battle for the Pharaoh’s power begins now. Soon, the three Egyptian God cards will rise to protect him, while he serves as the new Pharaoh! 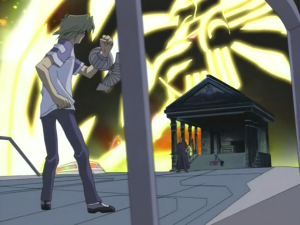