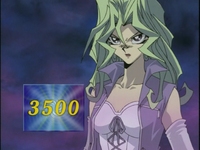 The duel between Mai and Marik continues. Mai has her entire 4000 life points, while Marik’s life points rest at 2350. Marik has brought the duel to the Shadow Realm, and his trick is to slowly wipe out Mai’s memories. Already, Mai has lost the memory of Téa. Tristan notes that Mai looks like she’s in a major daze. Téa shouts out to Mai to hang in there. Mai stares down at the gang, but she doesn’t see Téa. Not knowing who Téa is anymore, Mai wonders where that voice is coming from. Téa is puzzled of why Mai isn’t answering her. Yugi knows that it’s true; Téa has been erased from Mai’s memory. Marik laughs and tells Mai to cherish all her memories, for she will soon forget everything she knows.

Marik sets a card face down and then summons Makyura the Destructor in attack mode. Then Marik activates a Magic card, the Mystical Black Pendant. It raises Makyura’s attack strength by 500 points, giving it 2100 attack points. Mai notices that Marik’s monster is now stronger than her Unfriendly Amazon. This can only mean one thing: Marik plans to attack! Marik thinks it’s too easy. He orders Makyura to attack Mai’s monster. Mai counters with the Trap card, Amazon Archers. This card reduces Makyura’s attack by 500 points, bringing it back down to 1600. Mai then orders her monster to attack. Unfriendly Amazon destroys Makyura, and Marik’s life points drop to 1950. Strings, Marik’s servant, is erased from his mind. Marik thanks Mai since there’s no one worth remembering. He prefers to be all alone! Mai thinks Marik is nuts. Marik says that his Black Pendant causes Mai to lose 500 life points. Also, because Makyura was destroyed, Marik can use its special ability by activating any Trap card from his hand. So, Marik plays Rope of Life. This card revives Makyura the Destructor and gives it 800 extra attack points. With 2400 attack points, Makyura attacks and destroys Unfriendly Amazon.

The next friend that Mai loses is Joey. Mai cries out to Joey. She’s beginning to feel very alone, but she realizes that it’s nothing new. When she was younger, she never had any friends and her parents were too busy to spend time with her. When she discovered the game of Duel Monsters, her Harpie cards were the closest things she had. However, deep down inside, Mai knew they weren’t real. She decided that she was meant to be alone. Until one day, on the boat to Duelist Kingdom, everything changed. As soon as she met Yugi and the gang, Mai felt something she never felt before – friendship. Her loneliness began to disappear, but now she’s losing the only real friends she’s had!

Marik laughs and tells Mai to feel the pain and torment that’s dwelling on her. No one said shadow games were pleasant! Soon, Joey’s memory is erased from Mai, and she falls to her knees. Joey calls out to Mai, but Mai doesn’t respond. Joey can’t believe Mai is now ignoring her. Yugi says that Mai has forgotten Joey. Joey can’t believe that. He tries to talk to Mai some more, but Mai just has a blank look on her face. Yugi finally decides that if Marik is going to use his power to hurt Mai, then he will use his power to help Mai. He must show Mai that she’s not alone, and the only way to do it is to use his own Millenium powers to penetrate Marik’s shadow game!

Yugi enters Mai’s mind. Mai wonders what he’s doing here, and Marik wants to know too. Yugi tells Mai not to give in and not to let Marik’s illusions distract her. Mai insists that it all seems so real, and Yugi says that the world she is in only makes it real. He tells Mai to win this duel, but Mai isn’t sure if she can. Suddenly, Mai hears Joey’s voice again and wonders who it is. Yugi tells Mai that it’s the voice of her friends. She can be assured that she is not fighting this alone. Mai thanks Yugi for his support. She has regain her confidence, and with that, Yugi exits her mind. Mai continues to hear Joey shout out to her, so Mai thinks Yugi may be right. Marik is furious that Yugi intruded his shadow game. Mai tells Marik to bring it on since she’s never backed down from a duel.

Mai begins her move. She summons Amazon Chain Master in attack mode. Then she plays one face down card and ends her turn. Marik states that Mai’s Chain Master is weak. Mai tells herself that once Marik attacks, she will activate her secret weapon. Marik reminds Mai that once Makyura destroys Chain Master, another portion of her memory will disappear. He advises Mai not to play such weak monsters, or it won’t be long until Mai’s mind is shrouded in complete darkness! Marik summons Holding Arms onto the field. Holding Arms attaches itself onto Amazon Chain Master. Marik explains that Holding Arms prevents Mai’s monster from attacking for three turns.

Yugi hopes Mai knows what she’s doing. If she loses the shadow game to Marik, her mind may never recover! Yugi tells Marik to forget these shadow games and just duel. Marik replies that shadow games are how he duels. Duel Monsters and shadow games are intertwined, so he’s just playing the game how it was originally intended. Unfortunately, Mai has been selected the victim for today’s game. Yugi tells Marik that he’s insane. Marik thinks it’s because he duels with ancient magic, but last time he checked, Yugi uses his Millenium power too. Yugi agrees, but he doesn’t do it to spread evil. Mai tells Yugi to stop defending for her. She thinks she can handle it on her own. Joey can’t believe Yugi is going to continue to let Mai duel. Yugi says that he is, and Joey hopes that Mai is making the right choice.

Mai makes her move. She activates her face down card, Grave Arm. She can use this card to destroy a monster. Marik says that his Holding Arms remains safe. Mai says that she plans on destroying her own monster with it. Because Mai destroyed her own monster, her memory remains safe. Marik thinks Mai is so desperate to keep her memory. Mai tells Marik that her Chain Master has a special ability. Before it goes to the graveyard, she can take a card from Marik’s deck. The card she plans to take is Marik’s Egyptian God card, The Winged Dragon of Ra! Joey cheers. Marik says that Mai has to defeat him first if she wants to keep Ra. Yugi thinks Mai made an awesome move. Now all she has to do is summon it to the field. Marik thinks Mai was foolish to take the most powerful card in Duel Monsters. He wonders if Mai can use it. Kaiba wonders if Mai has the experience to control an Egyptian God card. He admits that Mai is a good duelist, but is she good enough?

Mai begins her move. She knows that she must sacrifice three monsters in order to summon Ra. But so far she has none and Marik has two. Yugi and Joey continue to cheer for Mai. Kaiba wants to see Ra in action. Mai places two cards face down, and then she summons Amazon Fighter in attack mode. Mai smiles. She notes that if Marik tries attacking her, Marik will get an unpleasant surprise. Marik notices that Mai played another weak monster, something he can eliminate with ease. Marik orders Makyura to attack Amazon Fighter. Mai activates her first face down card, Amazon Magician. With this Magic card, she can swap the attack points of Makyura with Amazon Fighter. Now, with 2400 attack points, Amazon Fighter attacks and destroys Makyura. Arkana, the magician duelist that Yugi dueled, disappears from Marik’s mind. Also, Marik’s life points drop to 1050. 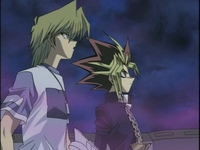 Joey is excited over the fact that Marik is almost down to 1000 life points. Marik laughs and states that Mai has fallen right into a trap. He activates his Trap card, Card of Last Will. This card allows Marik to draw five new cards into his hand. Yugi is worried that this could change everything. Marik is grateful that he gets a new hand. He further says that destroying Makyura activates its special ability. So, Marik activates the Trap card Nightmare Wheel. He explains that Amazon Fighter can’t attack, plus Mai takes 500 points of damage each turn. Mai smiles and expected Marik to do something like this. So she activates the Trap card, Rescue Operation. She explains that this Trap card rescues her Amazon Fighter from Marik’s Trap. This also allows her to summon a new monster onto the field. Marik asks if she’s going to summon The Winged Dragon of Ra. Mai says that if she does that, it will have 0 attack points. But Mai plans on summoning it eventually. So, due to Rescue Operation’s effect, Amazon Fighter returns to her hand. Then Mai summons Cyber Harpie Lady in attack mode.

Mai is about to begin her move. If she can draw the right card, she will be able to play The Winged Dragon of Ra. So Mai draws her card. She plays the Magic card, Graceful Charity. Mai draws three cards and discards two from her hand. Mai holds out her hand: The Winged Dragon of Ra, Gravity Bind and Elegant Egotist. Seeing that she drew the card she needed, she tells Marik to prepare himself. Kaiba is excited that Mai may play the Egyptian God card. Yugi wonders how Mai will play it since she only has one monster on the field. Mai plays the Magic card, Elegant Egotist, turning her one Cyber Harpie Lady in three. Then Mai sacrifices her three Cyber Harpies to summon The Winged Dragon of Ra. A bright light shines over the arena. Everyone stares at it in awe. Marik thinks Mai is a fool for playing the Egyptian God card. She won’t be able to control it – it will end up controlling her!

A golden sphere is formed, and Mai wonders what it is. Marik says that The Winged Dragon of Ra is locked in that sphere. Yugi notes that things aren’t looking good. Mai wonders how she can use it. Marik exclaims that she can’t use it. Mai will never be able to unlock its ancient powers! 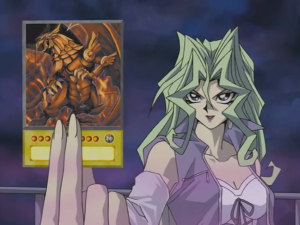