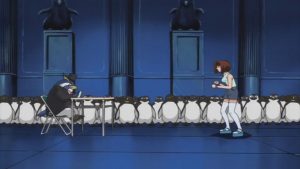 Téa climbs up the destroyed bridge to the other side of the canyon and, exhausted, falls asleep. She is woken by a penguin. It leads her to a raft, which takes her to a beach filled with more penguins.

The penguins lead her to a building where Crump, in the form of “Nightmare Penguin”, introduces himself and challenges her to a Duel.

Téa runs away but becomes trapped in an icy arena where Crump forces her to Duel him. She chooses “Dark Magician Girl” as her Deck Master.
When a player loses Life Points, ice forms around that player from the feet up.

As a penguin, Crump is immune to cold, so even though both players are subject to the freezing rule, Téa is the only one suffering as it happens. 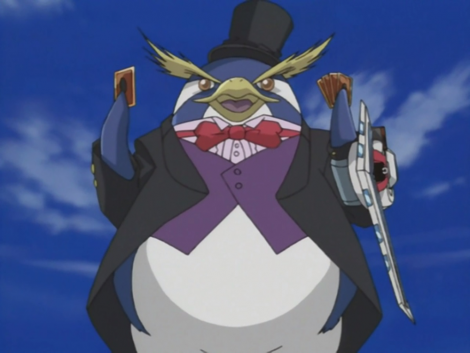 Crump tells Téa about his childhood and how he developed a love for numbers and penguins, who jointly care for their young, after his parents neglected him.

After entering a virtual door in the previous episode, Yugi finds himself in a dark maze with a series of doors. Behind the doors are monsters which he must destroy with his own cards to progress. During this, he can hear Téa’s agonizing cries from being frozen.