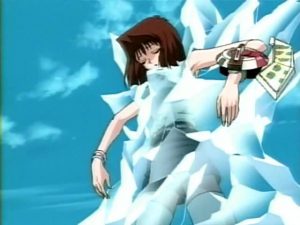 Kaiba and Mokuba find another projection of their past through a virtual door, this time showing their life with Gozaburo. Kaiba was forced to overwork in his studies. When his toys were taken away, Mokuba saved his Duel Monsters cards and tried to cheer him up by sneaking them to him along with a drawing of a “Blue-Eyes White Dragon” card. In the present day, Noah mocks the brothers.

Yugi and Yami Yugi work out how to progress in the maze. They can hear that Téa is in trouble in her Duel.

Yugi realizes that the key to proceeding is to defeat monsters in each doorway in increasing order of strength. He and Yami Yugi have limited resources available, so they conserve their very best cards and use adapting tactics.

Téa uses “Maha Vailo” (a card she remembers Yugi showing her) to gain an advantage, but Crump defeats it quickly. She has no monsters left. Her Deck Master, “Dark Magician Girl,” volunteers to be summoned, and Téa heeds this advice.

Crump admits that “Dark Magician Girl” could be a threat if “Dark Magician” were to join her, but Téa’s reaction to this comment reveals that she never put that monster into her Deck.

Yugi reaches the Duel, but he is trapped behind ice and can only watch as Téa comes closer to defeat. 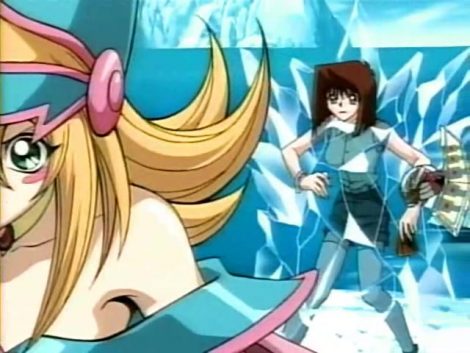 In her last effort, Téa uses her Deck Master’s ability, draining her Graveyard to draw cards in hopes of getting the first card she put in her Deck: “Sage’s Stone.” She gets it, and its effect summons “Dark Magician” from Yugi’s nearby Deck. When “Dark Magician” breaks through the ice to join “Dark Magician Girl,” Yugi is able to encourage Téa.
Both Magicians attack, destroying Crump’s defense and Life Points in one turn. Téa wins and is reunited with Yugi.