The KaibaCorp blimp is en route to KaibaCorp Island (Alcatraz in the Japanese Version) when the autopilot is hacked and it suddenly changes course. A mysterious boy calling himself Noah communicates through a video message, claiming to be in control and appearing to know a lot about Kaiba despite Kaiba never having met him. The blimp docks in a fortress emerging from the ocean and is locked down by magnetic anchors.

Noah forces the gang (Kaiba, Mokuba, Yugi, Joey, Téa, Tristan, Duke and Serenity) into the fortress. There they encounter some old foes — KaibaCorp’s former Board of Directors, The Big Five, who inform them that after they were defeated in Duel Monsters by Kaiba and Yugi, their bodies had been destroyed and their minds trapped in cyberspace (at the end of the Legendary Heroes mini-arc). Noah had later hacked into KaibaCorp’s mainframe and uploaded The Big Five’s minds into his own Virtual World so they could team up and take revenge on Kaiba.

The Big Five propose a challenge to Yugi, Kaiba and the rest of the group: a Duel Monsters tournament within the virtual world. If any of the gang loses a Duel to one of The Big Five, the winner will gain control of their body and escape to the real world while the loser’s mind will be trapped in the virtual world.

For the tournament, The Big Five introduce a new set of rules where each duelist has a Deck Master. The group are briefly sent to a preview of the virtual world so they can watch a virtual Duel between a virtual duplicate of Kaiba and “Total Defense Shogun” using the Deck Master system. The Big Five explain the rule of an automatic loss if a Duelist’s Deck Master is destroyed. To put the odds further in their favor, The Big Five declare that they will be Dueling everyone currently present before them; this includes non-Duelists like Tristan, Téa, and Serenity. 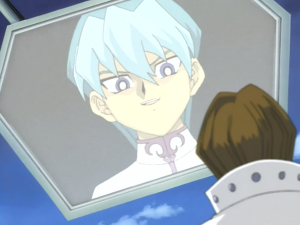