After avoiding Yugioh for a while due to exams, I am back and I have some good news. This fall, Konami will release 3 new promo cards: Unity, Yu-Jo Friendship, and Judgment of the Pharaoh. 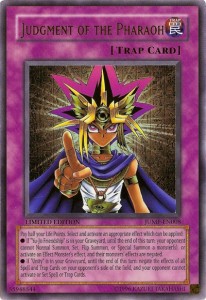 The time has come yet again. The time for another Sneak Peek tournament that will allow Yugioh fans to collect new packs before they even hit stores.... Read More

Alright, here is the link to the site where you can see the card lists for the Earth structure deck which should be available in late April-early May, and the Harpie Lady deck which will be available sometime in August.... Read More

The Shadow of Infinity booster packs will soon be out, and I’m sure many of you are ready to get those three Shadow Gods. for those of you who really want to get the Shadow Gods, bad idea. If you’re not, then you’ll be happy. The new packs supports Insect decks, Cyber Dragon decks, and of course the Ancient Gear Golem decks. I would give the pack a rating of 5/10 for being good, but not good enough considering that you only get 1 ultra rare card per box so you’d have to buy at least 3 booster boxes to have a chance of getting at least 2 Shadow Gods and a Cyber Laser Dragon. At the Sneak Peek, only about two Cyber Laser Dragon’s were pulled, out of almost 16 booster boxes, so if you get a Laser Dragon, do not give it up so easily. Anyway, the entire set has only about 64 cards.... Read More

Here it is. I’m not sure if its the full list of cards, but I’ll write down all of the ones I know and give details on some of the very anticipated ones like Armed Dragon LV10 or Elemental Hero Steam Healer. After that, I’ll post a link to the site where I found these and you can check out each card individually.... Read More

I have received news that the next structure deck is scheduled for release in June. The deck is called the Tomb of the Divine Guardian which is an Earth and Rock monster deck based upon ancient Egypt.... Read More

There are 5 new parallel cards expected to hit hobby leagues all around the U.S very soon. The first is Cyber Jar which should come out in late January-early February, followed by:
February: Sangan
March: Heavy Storm
April: Marauding Captain
May: Fissure
I will report if there have been any changes made on the next four, however, Cyber Jar is sure to be one of the 5.... Read More

Dark_Marik has posted something about it this already, but I’d like to expand on it. I just bought the deck, and it’s not so bad. I has some pretty sweet cards in their common version, like Breaker, Magic Cylinder, Lightning Vortex, Dark Magic Attack, Skilled Dark Magician, Diffusion-Wave Motion, Mage Power and a new type of Dark Magician (the one with a stone tablet behind him).... Read More