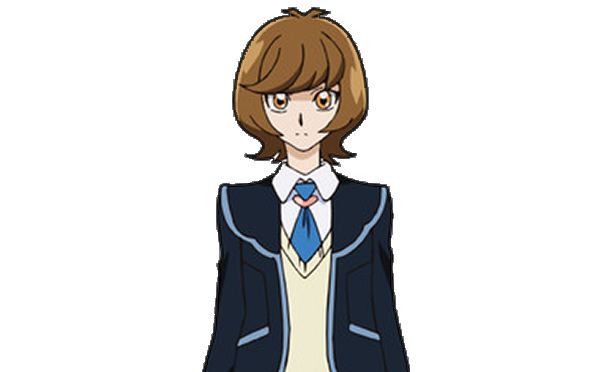 Aoi Zaizen is a character appearing in the Yu-Gi-Oh! VRAINS anime. She is Yusaku’s classmate who attends the same School as him. She is a Charisma Duelist.

“Aoi” (葵) means “hollyhock”, a plant associated with abundance and great fortune and was also the emblem of the Tokugawa family. The characters that form “Zaizen” (財前) can be translated as “before wealth”

Aoi is a fair-skinned young woman with a bob-cut-shaped light brown hair and yellow eyes.Her standard attire consists of a slate-colored jacket with white trim over a light yellow top which covers a white dress shirt with a blue tie, a short black skirt and black socks and brown shoes.

Aoi Zaizen is described as looking quiet on first sight, but is a Charisma Duelist that is very active in Link VRAINS.