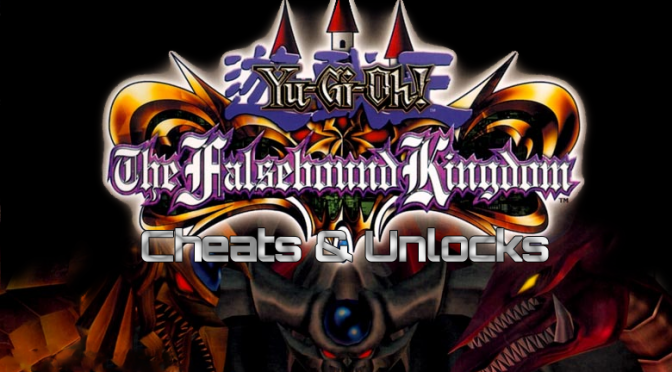 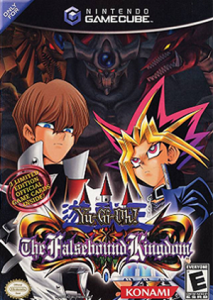 A real-time strategy game at heart, Yu-Gi-Oh! Falsebound Kingdom lets players choose to play as either Yugi or Kaiba from the Yu-Gi-Oh! animated TV show as they strive to escape from the sinister virtual world in which they have been trapped. Fans of the series are able to set their favorite TV characters against one another in exciting 3-on-3 monster team battles for heated duels that unfold on a colorful 3D battlefield. Vying for control of the map, players will form a team of three monsters and delegate commands to the team in real time. As the fighting heats up, players can unleash awesome special moves and visually stunning combo attacks.

Get Obelisk The Tormentor
To get Obelisk the Tormentor, beat story mode once with Yugi Moto. He should appear as an item that you can summon once a round.

Unlock Eye of Ra
To unlock the Eye of Ra, beat Marik while playing as Joey.

Unlock Joey
Win the story mode with both Yugi and Kaiba to unlock Joey.

Blue Eyes White Dragon – Beat the Lord of D. in the Burrow on level 14

Challenge Mode with your Monsters – Play through all three stories

Armored Zombie – Use call of the grave on Zanki

Dragon zombie – Use call of the grave on crawling dragon

Gaia the Dragon Champ – Gaia the fierce+Curse of Dragon

Metalzoa – use metal morph on Zoa

How to find some monsters in Yugi Side

(Note: If you lose any of these monsters, you won’t be able to get them)

Aqua Dragon – Walk through the bay in Scorched (Mission 14) on Yugi Side, there, defeat him, Fortress Whale and Suijin to get them.

Baby Dragon – SouthWest of Beyzon in Refugees (Mission 8) with Joey to get him.

Beast of Gilfer – In Beastly Badlands (Mission 6) go west (not directly west) the mountains above Tower Pegasis. Beat him, The Illusory Gentleman and Neck Hunter

Dark Elf – Beat brainwashed Tea in Spellcaster (Boss of Mission 11) to get her.

Dark Magician (Arkana) – Defeat Arkana (Boss of Lost Cause, Mission 16) on Yugi side to get him.

Dark Magician (Yugi) – Defeat Panik (Boss of Beasty Badlands, Mission 6) on Yugi side to get him

Dark Magician Girl – Liberate both captured towns in Counter Attack (Mission 10) on Yugi side, having Dark Magician in Yugi’s Team.

Fortress Whale – Walk through the bay in Scorched (Mission 14) on Yugi Side, defeat him, Suijin and Aqua Dragon to get them.

Mystic Horseman+Hane-Hane+Man-eater bug – In Fury of the Empire (Mission 2) they are in the Forest south of Croethe. (Not directly south) Defeat them all and you get them all

Octoberser – In Mission 5, go south (not directly south) of Jokhan. Fight him and win to unlock.

Panther Warrior – Defeat Joey (Boss of That Someone Special) with Mai to get him.

Silver Fang – In War Campaign (Mission 1) He is directly in-between Jukhud and Makhad. Defeat him and you’ll get him.

Suijin – Walk through the bay in Scorched (Mission 14) on Yugi Side, defeat him, Fortress Whale and Aqua Dragon to get them.

Summoned Skull – Get into Tower Pegasis in the Beasty Badlands (Mission 6) on Yugi Side, defeat him and he will join you.

The Illusory Gentleman – In Beastly Badlands (Mission 6) go west (not directly west) the mountains above Tower Pegasis. Beat him, Beast of Gilfer and Neck Hunter to get him

Winged Dragon Guardian of the Fortress #1 – In Strategy (Mission 3) Go North of Dyethuro with Yugi. He’ll join you without a fight.