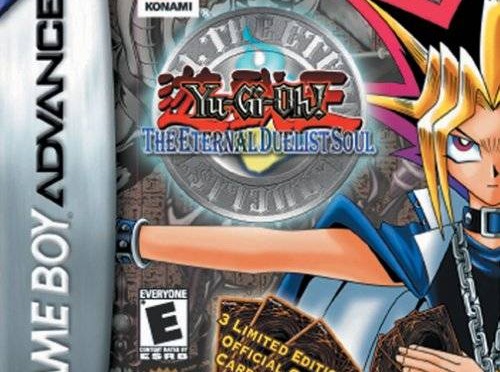 Welcome to the world of Duel Monsters. Konami has finally released a card game that is true to the actual Yu-Gi-Oh! trading card game: The Eternal Duelist Soul. This FAQ is designed to help you get an idea of what strategies can be used when building a card deck, as well as give you an insight to some of the up and coming battles that you will be facing in this game. So get ready. It’s time to duel.

Record – This will list your current record of Wins/Losses/Draws for each Duelist you have played in the game. This record is also shown when you highlight a Duelist in the Campaign mode.
Calendar – A day will pass in the game after every duel. The Calendar will list days when you will get a Yu-Gi-Oh! magazine (which contains 5 cards), or when special tournaments are held. Magazines are acquired at the end of the day (after a duel). Tournaments replace standard duels in Campaign mode.
Card Trading – Trade with your friends. Just connect two GBAs each with a game pack, and trade away.
Password – Those familiar with the actual Card Game might know that some of the cards contain an eight digit number on the lower left corner of the card. This number can be inputted into the Password screen to get a copy of that card in the game.

These codes (if they are available) are listed in the Trading Card Game Information section of this site. [The game will only allow you to use each password once unless you erase all data and start over.]

Card Types
There are a total of 6 card types, 20 monster types, 6 monster attributes, and 6 magic/trap effects in this game.

Monster Attributes
Earth, Water, Fire, Wind, Light, Dark [As far as I know, some Monster Attributes/Types have advantages over others but I still haven’t learned which ones are there. Unlike the GBC version of the game, this advantage is only used when an attack is reflected or when a draw is present (same attack/defense power).]

Magic/Trap Effects
Equip – A magic card can be equipped to a monster to alter their attack and/or defense.
Quick-Play – A quick-play magic card can be activated during any time in your turn, or when a monster is summoned, sent to the graveyard, commands an attack, or is set on the opponent’s turn.
Continuous – These cards will remain on the field until it’s destroyed.
Ritual – These are the cards that describe the ritual process.
Field – These cards change the field to alter the attack/defense power of the card types listed on the card.
Counter – A counter trap card can be use to stop the activation of a magic card, trap card, or effect card.

Description of Field
The playing field during a duel consists of several sections.

Duel Phases
The duel progress through six phases. In some case, you have to press the B button to proceed to the next phase (or to end your turn).

[If you have no monsters in Attack mode (or you can’t attack) after Main Phase 1, you will be prompted to end you turn. Also, you cannot attack during the very first turn in the duel.]

A Special Summon is a summon that is done by a Fusion, Ritual, or using a Magic card like Monster Reborn. These cards do not count as a normal Summon, so you can still place a Duel Monster on the field from your hand. These cards are also NOT subject to certain trap cards.

Fusion
A Fusion allows two or more monsters to be combined to create a more powerful Duel Monster. In order for a fusion to take place, you must have the following.

Rituals
Just like a Fusion, a Ritual requires the following.

I have the firm belief that there is no such thing as the PERFECT deck. No matter how good your cards are, all it comes down to is luck. It’s a matter of drawing the right cards at the right time. However, I do believe that there are good cards and bad cards. This section will give you a good idea on the types of cards that you should have in your deck. I won’t go into actual cards, since it would be best for each person to get a “feel” for each card (and learn how to use each of them). Check the TCG CARD INFORMATION section to learn about each card.

You are allowed only 40 cards in your deck (plus up to 20 Fusion cards placed in the Fusion deck). In my opinion, your deck should consist of the following:

Let me break this down. You want a good variety of cards that allow you to be in a good position when you start the game. First, you need some powerful Level 1-4 cards that can be summoned immediately. You want to have monsters with either a high Attack (like Axe Raider) or Defense (like Giant Solider of Stone). This will ensure that you have at least one card that can be used as a tribute to summon a Level 5 or 6 card (or a Level 7 or 8 card if you have 2 monsters available as tribute). Your Level 5-6 cards should have a good Attack power (possible one of them with just very high Defense). After all, you are sacrificing good cards for them. Try not to have more than 2 Level 7-8 monsters. They are a pain to summon. You can replace these cards with Ritual cards, if you like. Your Magic cards and Trap cards should be used to gain the advantage. Use strong, powerful Magic cards. Try to avoid using Magic cards that deal with just one monster type or attribute (unless your deck revolves around them).

Just remember to use every card to your advantage, and you should be able to hold your own against the toughest of Duelists. You should also learn to modify your deck based on the Duelist you are dueling. Experiment with different decks and place Magic, Trap, and Level 5-8 cards in your side deck to switch between them when you in a tournament situation. Check the next section for some insight on the duelist that you will be facing in the game.

I want you to realize that this is my opinion, you do not have to follow this perfectly. Feel free to “mix it up” and choose whichever cards you feel like using. As I said earlier, this deck will change as you advance and face more cunning duelists. Just take your time, learn from your mistakes, and try again.

The game begins with one of the Duelists, Tea, asking you to choose a starter deck. You have a choice of picking a blue deck, red deck, or green deck. These decks contain 40 cards, which contain the following types of cards:

For the most part, these cards are random. However, I have noticed that there are 11 cards that are always included, regardless of the pack you choose.

Your first round of dueling will involve facing 5 Duelists. You can choose to battle these Duelists as many times as you want. You earn a booster pack of cards that contain 5 cards every time you win a Duel. There are 3 booster packs to choose from when you start the game. These are the Duelists:

In this case, once you defeat Tristan, Tea, Yugi, Joey, and Bakura twice, you will get to choose from 5 booster decks (the 3 that were already there and the 2 new ones available). Plus, you will get a chance to face the second “round”.

Go to: The Eternal Duelist Soul for GBA Passwords »