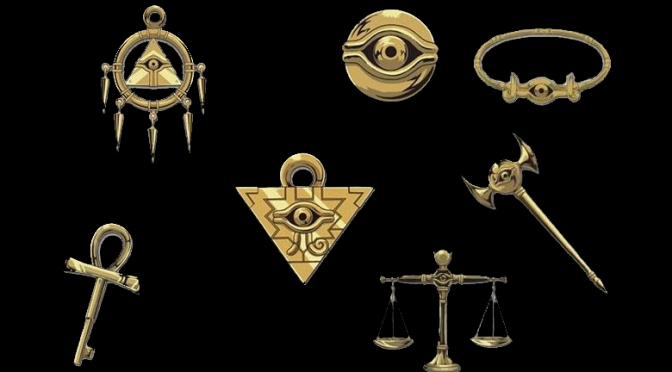 5 Thousand years ago, the Egyptian Pharaohs played a magical game that was similar to the present day Duel Monsters game. This ancient game used magical ceremonies that allowed them to see the future and decide a person’s destiny. This was referred to as, the Shadow Game and the monsters used at the time were real.

The magic and monsters on earth became too powerful and threatened to destroy the world. One brave Egyptian Pharaoh came along and stopped this with 7 magical items. Now this game if brought back in form of playing cards, and the 7 magical items were rediscovered. These totems are referred to as “Millennium Items” and each contains their own special power. 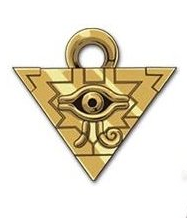 Abilities: It gives the owner the ability to win any game. It can also return souls to their proper bodies and crush the mind of the evil, sending their soul to the shadow Realm.
Spirits Within: Yu-Gi-Oh, Ancient Pharaoh of Egypt
Strengths: Can never lose duel monsters games or battles
Weaknesses: Spirit that will go all out to win, and there are many pieces to it, making it easy to break.
Appearance: Episode 1, Season One, Solving the Millennium Puzzle 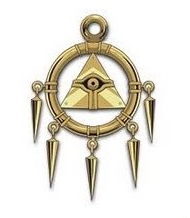 Abilities: Can erase people short turn memories. Can pull souls from people and take them to the shadow realm. It can also route paths and direct you to the other six millennium items.
Spirits Within: Yami Bakura, Enemy of the pharaoh, grave theft, theft of millennium items
Strengths: Can make people forget events, can take souls and annihilate them.
Weaknesses: Has an evil and reckless spirit within, who is hard to control and keep hidden.
Appearance: Episode 12, Season 2, Live the Game 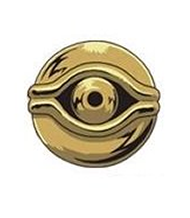 Abilities: The power to look threw other eyes, the power to read peoples minds, and the power to steal souls from mortals and put them in a form of a card.
Spirits Within: None, but it influences evil
Strengths: Can see all over, can read minds, can gain power by stealing souls
Weaknesses: You lose an eye for goodness sake!, Many counters
Appearance: Episode 2, Season 2, The Gauntlet is Thrown 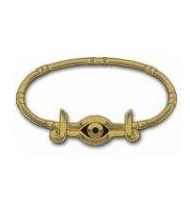 Abilities: Can see into the future and past
Spirits Within: None
Strengths: You will know what will happen and what happened in the far past
Weakness: No real POWER, per say
Appearance: Episode 50-60, Season 2,
Summary: Kaiba meats Isis, who gives him a god card to work for a goal, Isis is on the good side. When the necklace loses power, she gives it to Yugi. 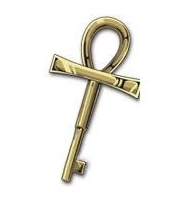 Abilities: Allows the person to look completely into someone’s mind and alter their personality.
Spirits Within: None
Strengths: Can drain evil and open minds
Weaknesses: Personality altering cannot always come in handy
Appearance: Episode 40 (38 US), Season 2
Summary: Shadi meats Yugi once the power of the millennium eye is drained in Episode 40 (38 US), Yu-Gi-Oh! Aftermath (King of Duelists, King of Games,) 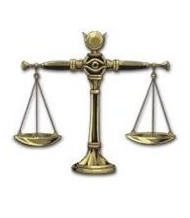 Abilities: Allows the person to judge someone. If they ask a person a question, they must answer at it must be the truth or they are punished.
Strengths: Can banish people can find any information and allows the owner to know if the person can be trusted.
Weaknesses: Very large and heavy.
Appearance: Episode 40 (38), Season 2
Summary: In Episode 40 (38), Shadi needs to know if Yugi might be a thief. 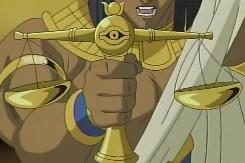 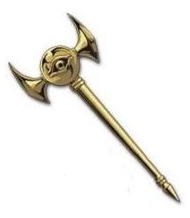 Abilities: Allows the owner to read and control minds, and brainwash them. Levitation of objects is possible when used correctly. Can be a dagger.
Strengths: Mind control, of course, Brainwashing is always good. And an invincible dagger? And a light object. Go, Rod, Go.
Weaknesses: I cannot find any, because IT HAS NONE. I am still not saying it is the best item, but it surely is not the worst.