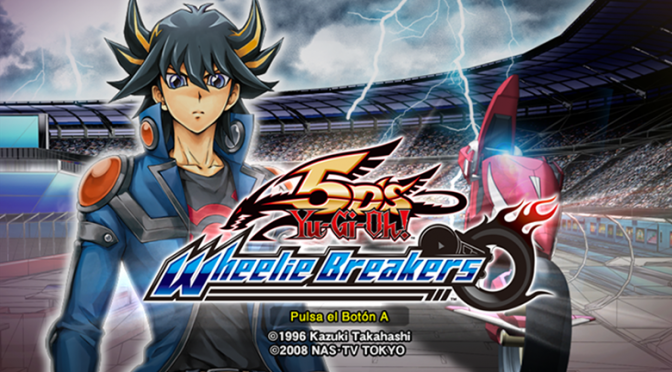 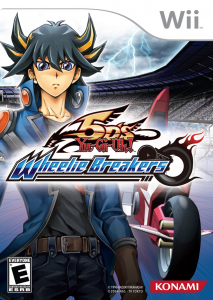 Yu-Gi-Oh! 5D’s Wheelie Breakers uses characters and situations from the new Yu-Gi-Oh! 5D’s series, which takes place in the future and revolved around the adventures of Yusei Fudo, the hottest duelist in Neo Domino City.

Based on the ‘Turbo Duels’ in the Yu-Gi-Oh! 5D’s animated series, Yu-Gi-Oh! 5D’s Wheelie Breakers introduces players to a fast-paced twist on the racing genre. Yusei and Jack duel in a new motorsport called ‘Wheelie Breakers’ that combines card dueling with duel wheel racing. As they race around the track in their Duel Runner motorcycles, players call upon monsters from their decks to battle their opponents and prevent them from finishing the race. These cards can then be rearranged between races as strategies to unseat the rival players are developed. Using achievement points which players receive based on their race results, they can purchase new cards and add them to their decks providing upgrades.

Yu-Gi-Oh! 5D’s Wheelie Breakers takes full advantage of the Wii’s control system as players use the Wii Remote for both competitive card dueling and Duel Runner racing. Users can also use the Nunchuk during races, allowing for split-second manoeuvers including, acceleration, steering and recovery. A wide selection of gameplay modes are also offered including Story Mode, Grand Prix Mode, and Competition Multiplayer Mode with up to four players competing via a split screen system.

As has become traditional with Konami’s Yu-Gi-Oh! titles, Yu-Gi-Oh! 5D’s Wheelie Breakers will be released with three official Trading Cards inside the box.

Yu-Gi-Oh! 5D’s Wheelie Breakers for the Wii is scheduled to launch in North America May 2009, while Europe gets it in Sept.

Racing game with the dueling elements, based on “Riding Duel” in Yu-Gi-Oh! 5D’s animated series on 4Kids network.
Summon monsters during the race to try and take out your opponent using your monsters special powers and attack abilities
Compete in Story Mode and clear races to build your deck of cards and the monsters you can summon
Pick up and play game utilizing all the key functionality of the Wii mote for the card dueling and the Nunchuk for the racing including weight shifting, acceleration, steering and recovery
Includes 4 modes of play: Story Mode, Grand Prix Mode, Time Attack Mode and Competition Multiplayer Mode with up to 4 friends in racing and dueling split screen

The game is more akin to a racing game than Duel Monsters. Players can use monsters to defend themselves and attack opponents, magic cards that power up the player, and trap cards that can defend against player attacks. Monsters can attack if the player has enough Speed Counters that accumulate with racing, and more powerful monsters will require more Speed Counters to attack.

Players each have 4000 Life Points, though a player does not lose if he/she reaches zero, they just spin out. This game will also offer a 7 opponent runner mode in which cards will change their effects to power that can help or trap players, just like “Level Down!? that will “decrease the Top Speed of a player in a higher place than its owner for a limited” moment. In this mode, cards will be power-ups just like in Mario Kart Series.

Linking Yu-Gi-Oh! 5D’s World Championship 2009: Stardust Accelerator with Wheelie Breakers using the DS’s Wireless Connectivity will give you 10 DP as well as unlocking Dark Resonator for purchase in the shop if it hasn’t been unlocked yet. The second time that you connect Yu-Gi-Oh! 5D’s World Championship 2009: Stardust Accelerator, you will get 5000 DP and you will unlock Blue Eyes White Dragon for purchase in the shop.