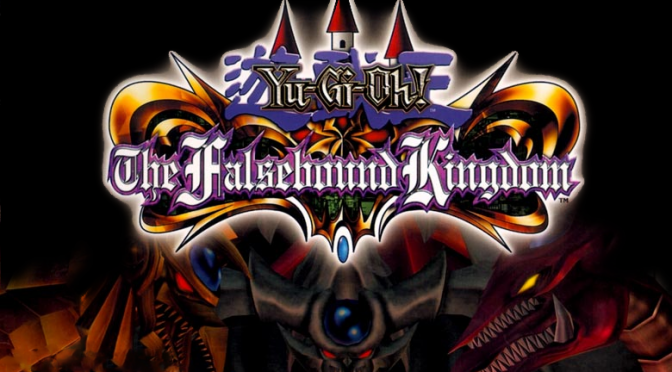 A real-time strategy game at heart, Yu-Gi-Oh! Falsebound Kingdom lets players choose to play as either Yugi or Kaiba from the Yu-Gi-Oh! animated TV show as they strive to escape from the sinister virtual world in which they have been trapped. Fans of the series are able to set their favorite TV characters against one another in exciting 3-on-3 monster team battles for heated duels that unfold on a colorful 3D battlefield. Vying for control of the map, players will form a team of three monsters and delegate commands to the team in real time. As the fighting heats up, players can unleash awesome special moves and visually stunning combo attacks.

The Yugi storyline involves Yugi, Joey, Tristan, and Téa being invited to the testing of the virtual reality game “Kingdom,” created by the company SIC. When they enter the game they soon find themselves trapped within it, and they must summon the help of the game’s characters and monsters in order to defeat the game’s villain, Emperor Heishin, and ultimately stop the plans of the game’s designer, Scott Irvine, to control the three Egyptian God cards. At one point in the Yugi storyline, Joey, Tea, and Bakura are all brainwashed, and the player must fight against Tea once, Joey twice, and Bakura once in a kind of race, where the player must get to a town before Yami Bakura does, or the level is automatically lost. Common Strategies done to complete this mission is to use a very fast monster, such as “Ansatu,” (Earned when Bakura joins your team on the level, “Battle for Tsughut”) and have that team charge Jakhdud immediately. Then, it is just a matter of defeating Bakura to win.

Kaiba’s storyline features Seto Kaiba and his brother Mokuba Kaiba, who are also trapped in the game. Initially they work for Emperor Heishin, but Kaiba soon turns against the Empire, as Marthis, his ‘helper’ hears Kaiba talking to Pegasus, after a mission in the game where the player has to face Pegasus, and suspects that Kaiba is a spy for the resistance, so turns him in to the Emperor, who sentences him to a public execution. However, Kaiba escapes with Mokuba and Bonz escape from the Empire. However, Marthis is waiting for him with a unit, and promises the man who brings Kaiba to him any thing he wants. After defeating all enemies on the level, Pegasus arrives and asks Kaiba to lead the resistance, as he ‘cannot return to the Empire’ with a price on his head. Kaiba recruits further members for his resistance, including Weevil Underwood and Rex Raptor, leaving the player with a large force only 7 missions into the campaign.

A climactic plot event in both stories occurs when Mokuba is kidnapped, and Scott forces Kaiba to battle against Yugi, and this level is called ‘Face Off’ in both of the campaigns. At the end of both storylines is a segment taking place within a secret room leading from the game’s fantasy environment to the inner workings of the computer that is running the game itself. Either team must defeat Scott Irvine as well as the enemy DarkNite, wielder of one of the God Cards at level 1, Obelisk the Tormentor in Yugi’s story, and Slifer the Sky Dragon in Kaiba’s. After beating one story, the other storyline becomes harder, with higher level monsters. In this harder mode, there is an additional villain, Nitemare, who has the God Card at level 99.

Joey’s storyline is a prequel to Yugi’s and features some minor characters from the other storylines. Its main villain is Marik Ishtar who uses The Winged Dragon of Ra. This storyline finishes with the character facing Kaiba, Mokuba, Marthis, and other Marshals, on the same map which the Kaiba campaign began on, which is almost a sign of things to come, as Malairuka and Jusell on Joey’s side are on the side of the enemy in Kaiba’s first mission.

The player, no matter what campaign they choose, is certain to face the three Blue-Eyes White Dragons, as Yugi and Joey face Kaiba, but Kaiba must fight the Dragon Lord to obtain the three Dragons.

Every time a campaign is completed for the first time, the level of all enemy monsters increases by 30. The only exceptions to this are the monsters on Scott’s team on the final level, which is 2 Serpent Night Dragons (Lv. 45) and a Skull Knight (Lv. 50), and then the Egyptian Gods at the end of the game, where the first opponent will always have a level-1 God.

Falsebound isn’t even a word. If you’re going to try that angle, you have to make sure your game isn’t about giant caterpillars and turquoise monkeys fighting in fields. But this is.

So you’re Yugi or Kaiba. We assume they’re significant, but we’ve never bothered watching the TV show beyond about two minutes. We chose Yugi, guessing that having purple bits in his hair might mean he was better in some way.

There’s no intro as such. You read loads of boring text and find out YOU’VE BEEN SUCKED INTO A VIDEO GAME. So you have to complete the game to complete the game, see? How terribly post-modern. We assembled quite the fearsome team of warriors (a dragon, a loser in a green hat and a hairy testicle with eyes) then set off to liberate this imaginary world.

You command your troops on a 3D map that would embarrass an N64, then come together with enemies in turn-based battles. Two lines of three people politely take turns to hit each other. The special attacks look crap and make no sense. How can you possibly electrocute a skeleton? Dry bone doesn’t conduct. Someone wins. You’re bored. The end.