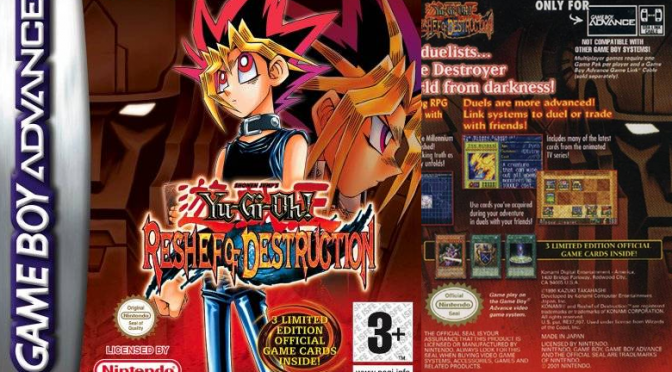 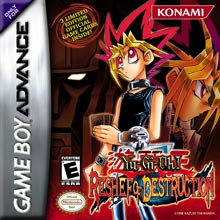 Find all our Yu-Gi-Oh! Reshef Of Destruction for Gameboy Advance cheat codes.

There are 6 codes for this game.

[Master] Must Be On

Other Cheats and Hints

Once you defeat Reshef, restart the game and a new place will appear on the map called “Hall Of Eternity”. You can duel Pegasus, Kaiba, Yami Yugi, Dark Joey, and Yami Bakura there. There will be two new people called Shadi, and Noah. Test their powers!

The fastest way to level up is to duel against Tristan (he is one of the guys walking outside Grandpa’s Card Shop). Because Tristan is so easy to beat, you can win duels faster and the more duels you win the higher your level goes. The only downside to this is that it only gives you less than 10 domino everytime you beat him.

Get all Exodia Pieces

In order to get all five pieces of Exodia The Forbidden One, you must first save your game, then head to Grampa’s shop, then challenge Yugi Motu to a duel. Bet a £ star card and then defeat Yugi. He isn’t hard unless he uses Dark Magician. After you beat him if you are lucky you should get a piece of Exodia. Repeat until you have all 5 pieces, simple! Note: You have to be at level 137 to use Exodia so it may take a while before you can unleash its mighty wrath upon all who stand in your way.

Rebecca Hawkins: To see Rebecca, at the beginning of the game go to KaibaKorp, you will see her there. Be wary you’ll have to duel her.

Hanasaki: The Zombire fan from the comic series, you can see him when the Neo Ghouls are taking over Domino, go to the screen next to the screen with the fountain on it. He will try to stand up to a Neo Ghoul, dressed in his Zombire costume, however another one shows up and causes him to faint. NOTE: Whenever you talk to him, even though he is lying face down motionless, a Neo Ghoul will show up.

Go to: | Reshef of Destruction Walkthrough »