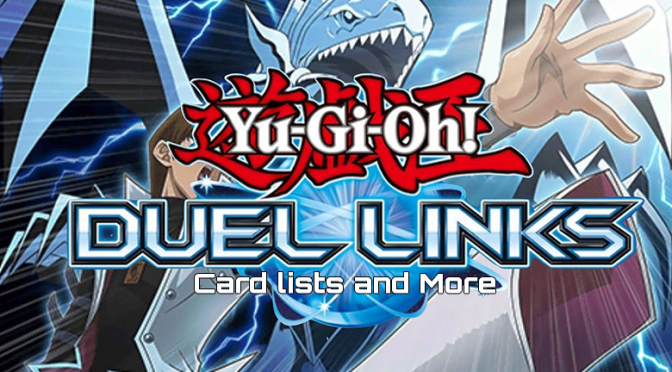 Duel Links will have different sets with various cards in them, just like in real life. The first Duel Links cards set of the closed beta is The Ultimate Rising featuring Blue-Eyes Ultimate Dragon.

This is good guide for those who want see what cards they can get.

“Infernity Archfiend” and “Infernity Launcher” are
finally here! Feast your eyes on them! 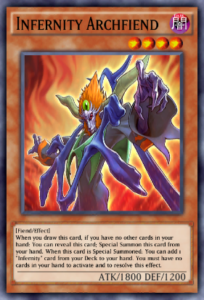 When you draw this card while you have no cards in your hand, you can reveal it to Special Summon it from your hand!

In addition, when you Special Summon it while you have no cards in your hand, you can add 1 “Infernity” card from your Deck! 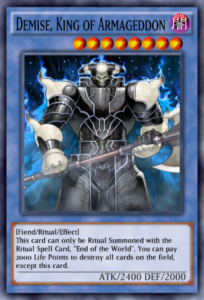 A Ritual Monster that can destroy all other cards on the field by paying 2000 Life Points!

Activate this effect and Summon additional monsters to finish your opponent off!

The Weather Painter Snow
When this monster is Normal Summoned, you can place 1 “The Weather” Spell/Trap from your Deck face-up in your Spell/Trap Zone!

Use this effect to play powerful cards such as “The Weather Thundery Canvas” or “The Weather Snowy Canvas,” and build towards victory! 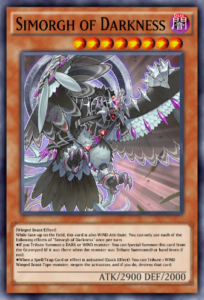 Once per turn, if you Tribute Summon a DARK or WIND monster while this card is in your hand or Graveyard, you can Special Summon it!

In addition, once per turn, when a Spell/Trap Card or its effect is activated, you can Tribute 1 WIND Winged Beast-Type monster to negate the activation and destroy the card.

Each box of Infernity Destruction contains a total of 90 types of Cards: 9 UR, 11 SR, 28 R, and 42 N in 180 packs. Each pack contains 3 different cards: 2 of them are individually guaranteed to be Normal (aka Common) or Rare, while the third card is guaranteed to be Rare, Super Rare, or Ultra Rare. There is a guaranteed number of copies of each individual card per box, depending on its rarity:

A Fusion Monster that works well with various Decks!
Valkyries are also ready for action!

Trishula, the Dragon of Icy Imprisonment

A Fusion Monster that can also be Special Summoned by banishing 2 monsters with a different name on your side of the field!

If this card was Special Summoned using only monsters that were originally Dragons, you can reveal and banish 1 card from your Deck, 1 card from the top of your opponent’s Deck, and 1 card from their Extra Deck! 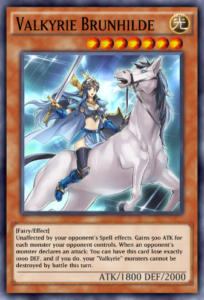 When your opponent monster attacks you, you can decrease its DEF to 1000 to make your “Valkyrie” monsters cannot be destroyed in battle this turn! 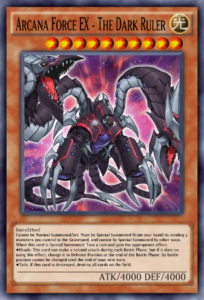 An “Arcana Force” monster used by Sartorius Kumar in the anime!

When this monster is Special Summoned, you will flip the coin and if it lands on heads, you can make a second attack during the Battle Phase.

Even if it lands on tails and this monster is destroyed, you can use the powerful effect to destroy all cards on the field! 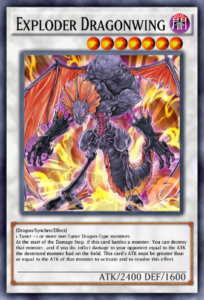 A Synchro Monster used by Jack in the anime!

When this monster battles a monster with lower ATK, you can destroy it and inflict damage to your opponent equal to the ATK of the destroyed monster!

Each box of Arena of Sanctuary contains a total of 50 types of Cards: 3 UR, 10 SR, 17 R, and 20 N in 100 packs. Each pack contains 3 different cards, which will always consist of 2 Normal (aka Common) cards and 1 Rare, Super Rare, or Ultra Rare card. There is a guaranteed number of copies of each individual card per box, depending on its rarity:

The exceptions to this are the following Normal cards, with there being 10 copies of each instead: “Wattsquirrel”, “Triamid Dancer”, “Karakuri Showdown Castle”, “Runaway Karakuri”, and “Triamid Fortress”.