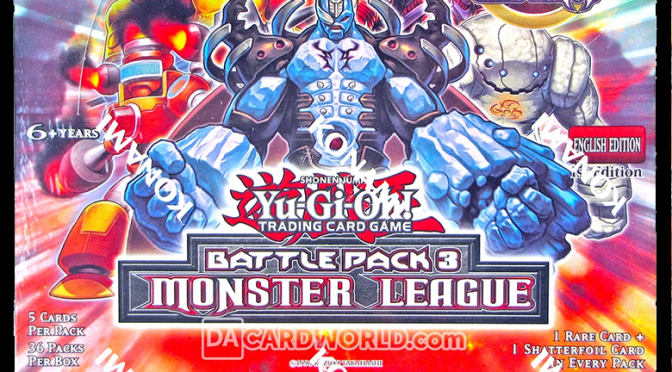 What is Sealed Pack Play?

Sealed pack play is how you take booster packs, and make them into a game unto themselves.

Just get together with your friends (or rivals!) and split up an even number of packs. Open your packs, make brand new Decks just from those cards you got, and start Dueling!

Everyone starts off clean. The only thing that matters is what you can do with the hand that’s dealt ya.

Of course, after you’re done playing, you’re still left with the cards from your packs. So you can walk away with some awesome cards for your regular Deck and collection, like Gem-Knight Pearl, Adreus, Keeper of Armageddon, Tour Guide From the Underworld, Fabled Raven, Doomcaliber Knight, Forbidden Lance, and Backup Warrior. Think of sealed pack play as a way to open up booster packs like you always do, and get a ton of bonus fun while you’re at it! With 220 cards in Battle Pack: Epic Dawn, no two Dueling experiences will ever be the same.

Harken back to a time when a single Summon or a well-timed Trap Card could decide the course of a Duel. Without the mass summoning and mass destruction tricks that players rely on in normal duels, you will have to hone your tactical skills to a razor-sharp point.

Each Battle Pack contains 5 carefully selected cards: One Rare Card, with a special glossy black or glossy white card name (similar to Duelist League colored card names). These Rare Cards are your game-changers, the cards that can turn a Duel around the moment they hit the table. Your most powerful Spells, Traps, and Monsters (including Xyz Monsters) will be from these cards.

Three commons, each designed to do something different:

The fifth card in your pack is the real wild card, because it could be any of the 220 cards in the set! It’s also guaranteed to be a shiny, sparkly card like you’ve never seen before – a brand new style of special cards!

These special cards included in Battle Packs have a sparkling, shiny pattern on top of the card. (You may have seen these types of cards before from Duel Terminal machines.) But Battle Packs introduce a brand new type of shine that you haven’t seen before, and it’s out of this world! If you don’t live near a store with a Duel Terminal arcade machine, don’t worry! Now you can get a similar sparkle and shine for your Deck from Battle Packs.

The 5th card in every pack (the wild card) is always one of these special cards. And every card in this 220-card set is available as a shiny card. That means you can get sparkly versions of anything in the set, like Gorz the Emissary of Darkness, Pot of Avarice, or Monarchs like Caius, Raiza, and Mobius

Draft & sealed play is a way to take booster packs, and make them into a game by themselves.

If you’re planning to pick up Battle Pack 3 just for the new cards and the chance to get some of your favorite cards as Shatterfoils, you might as well do some draft or sealed play with your friends when you open the packs. Get the most fun out of your gaming dollar!

Sealed Play is simple and easy. Just get together with your friends (or rivals!) and split up some packs. Open your packs, make brand new Decks just from those cards you got, and start Dueling!

Booster Draft is a bit more complicated, but uses a lot more strategy. Each player will need to start with their own supply of Monster League packs (9 packs per player is suggested).

Here’s a step-by-step guide on how to do Booster Draft:

1. Each player takes 3 of their Monster League packs, and opens them to get a stack of 15 cards. Set the other 6 packs aside.

3. Keep going around the table. Each player takes 1 card to keep, from the cards passed to them, then passes the remaining cards to the person on their left. Keep going in a circle until the last cards are taken.
IMPORTANT: All the stacks are being passed simultaneously! As you pass your 14 initial cards to the player on your left, the player to your right is passing you the remaining 14 cards from their packs. All the stacks are going around in a circle at the same time, and you keep drafting cards to add to your pool.

4. After the first packs are drafted, everyone should have 15 cards in their Deck pool. Now, open your next 3 packs of Monster League to get 15 more cards. Just like before, choose 1 of them to keep and add it to the cards you’ve already drafted. Pass the remaining cards to your RIGHT.

5. Keep going around the table, again. Each player takes 1 card to keep, then passes the remaining cards to their RIGHT.

6. After passing the second batch of cards, everyone has 30 cards. Each player opens their 3 remaining Battle Pack 3 packs to get 15 more cards. Repeat as above, passing to the LEFT again.

7. Once all cards are drafted, each player will have 45 cards in their card pool. Use these 45 cards to build a Deck of at least 40 cards.

Booster Draft is the ultimate test of your skills. Do you go for a brute-force approach, or try to assemble a combo-oriented Deck? Can you read the other players’ moves to figure out what they’re drafting, to give you an edge? Can you pass a card, hoping to pick it up the next time that stack goes around the table? These and other challenges await you in Battle Pack 3: Monster League!

Special Tournament Rule
(for home use, too!)

The special Monster League rule is:
All monsters are all Types.

Whether in your Deck, Extra Deck, hand, Graveyard, field, or banished, all monsters are treated as every monster Type. The monsters have put aside their differences, and united in one big Monster League!

You can expect to see combos and strategies that wouldn’t work otherwise, and get to play with tons of cards you normally don’t see much. You’ll be playing the Yu-Gi-Oh! TCG like you’ve never seen it before!

Some Insight into Sealed Pack Play

If you’ve ever tried sealed pack play with normal booster packs, you’ve probably encountered some problems. You might sit with a hand full of Tribute monsters you can’t play. Or you might have a hand full of weenies that get wrecked by your opponent’s nigh-undefeatable 1500 ATK “monstrosity”. Maybe you got a bunch of cards that require specific other cards to play, but you didn’t pull those other cards, so you can’t use anything. Maybe you don’t have any Spell or Trap removal – or maybe you have no effects that can destroy monsters.

All of these issues are easily dealt with in constructed play, where you have your own customized Deck assembled from the cards in your collection. But when you’re only playing with the cards from new packs, the game suddenly becomes very different.

Battle packs are designed to eliminate all of those problems, by carefully controlling which cards you will get from the packs you open. That way, you can experience all of the excitement and fun of sealed pack play, but without the problems that can arise when using normal packs. Each battle pack is engineered so that every one of its 5 card slots has a specific kind of card. It’s the first Yu-Gi-Oh! TCG pack ever made that’s designed specifically for sealed pack play.

Here’s how it works:

The entire set is made up of 220 cards. Each pack contains 5 cards. To make the pack construction a little easier to understand, we’ve organized the card numbers for the set based on which slot they take up in the pack. (Put your math caps on, because this might seem a little complicated at first.)

Card Slot 1’s card mix includes many of the most powerful cards in the set – the cards that will really make an impact when played. It stretches from Witch of the Black Forest (card 001) to Dark Bribe (card 055) and includes cards like Skull Archfiend of Lightning, Dark Magician of Chaos, most of the various Monarchs, Obelisk the Tormentor, Tour Guide From the Underworld, Raigeki, and Metal Reflect Slime.

All of the Card Slot 1 cards are Rare cards. The title is either glossy black ink, or glossy white ink – a variant style of card title that is similar to the colored titles on Duelist League prize cards.

Most of these cards either destroy monsters, Spells, or Traps, or else alter the outcome of a battle. But Spells and Traps with other effects can also be found here. This pool covers everything from Greenkappa (card 056) to Liberty at Last! (card 110), and is pretty diverse, including cards like the almighty Penguin Soldier, Axe of Despair, Ante, Forbidden Lance, Reckless Greed, Half or Nothing, and Power Frame.

All cards in Card Slot 2 are common cards.

All cards in Card Slot 3 are common cards.

These are lower-ATK monsters that are included for their utility, and range from Giant Soldier of Stone (card 171) to Psi-Blocker (card 220), and includes cards like Muka Muka, Makyura the Destructor, Stealth Bird, Night Assailant, Drillroid, Cyber Valley, Fabled Raven, Naturia Strawberry, and Gagaga Magician.

All cards in Card Slot 4 are common cards.

Because the cards in each card slot are restricted to exact card Pools, you’re guaranteed to have a nice mix of removal effects, power boosts, and high/low Level monsters for your Deck. This eliminates all of the pitfalls that can cause issues when trying sealed pack with normal boosters.


How to Play the TCG
0Shares