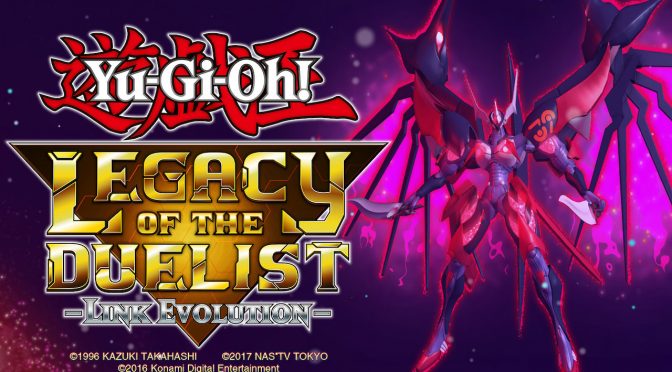 Helpful tips for Yu-Gi-Oh! Legacy of the Duelist: Link Evolution

Here are some simple tips and tricks you can use in the game to ensure that you’re the best duelist!

A huge part of Yu-Gi-Oh! is building your own deck to use in duels. In real life, this involves a lot of time researching, as well as quite a bit of disposable income. Fortunately, in Yu-Gi-Oh! Legacy of the Duelist: Link Evolution, it’s much easier.

When you’re in the Deck Editor and viewing a card, just press the R button to view related cards. This will reveal all of the cards that have some synergy with your chosen card, and it makes it much easier to find support cards for key monsters or archetypes. For example, if you are looking at “Dark Magician” and check “Related Cards,” you’ll see other support cards that will work out nicely with him.

I like to build decks based on key monsters and their support cards, so using this feature makes it a lot easier to see what cards you should have in the deck. It shows cards that you have and don’t have yet, so you can at least get the name and look up which packs it comes in.

When you start playing, you won’t have a lot of cards to start with in your trunk, but that changes quickly once you get some DP from duels and spend it on card packs. You also get card rewards from victories, so those can be some nice freebies. 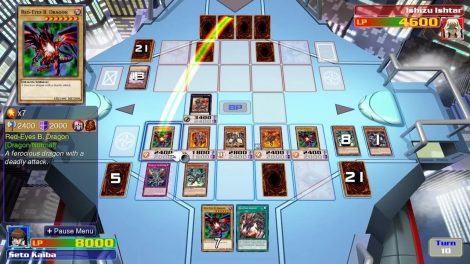 Once you have an idea of how to play the game and see the kinds of decks that your opponents use, think about what deck you want to make. I highly recommend focusing on building one very good deck that will get you through a lot of duels quickly, so then you can easily grind a lot of duels for DP. Then focus on building another deck to use once you get bored of your original one, or just want to experiment.

Remember, make sure to use the “Related Cards” feature in the Deck Editor to easily see what cards go well with the cards you want to build a deck with. One strong deck is going to get you a lot further in the game than several half-finished decks.

Know which character booster packs to spend DP on 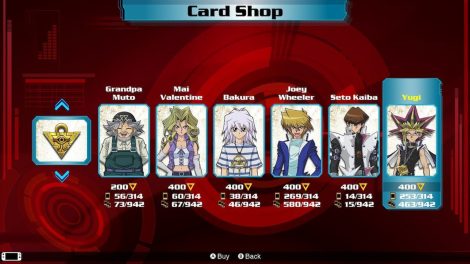 Again, as you figure out the kind of deck that you want to custom build, you’ll need to make sure to pick the right character packs to spend your DP on. This information can be found online but if you need some good starting points, I’d recommend Joey for Red Eyes and Jinzo cards, Kaiba for Blue Eyes cards, and Yugi for Dark Magician and spellcaster support. Yugi’s Grandpa packs give Exodia pieces and other general staple cards.

As you get into later series and unlock the character packs through the campaign, there will be more advanced archetypes to unlock. Usually, these packs include a lot of the cards and support that the character is known to use in the show.

Always have some staple cards

Staple cards are basically cards that can fit in any deck, regardless of theme or type. A few of these cards would be “Dark Hole,” “Raigeki,” “Harpie’s Feather Duster,” “Pot of Greed,” “Solemn Judgement,” “Mirror Force,” and more. These are cards that will always help you out in a pinch, give you control of the board, help you go through your deck faster so you can get the cards you want, etc.

While you need to have a strong theme for a good deck, always make sure to have some staple cards too. They’re just good to have in general, for everyone.

Use a User Deck instead of Story to progress faster

If you want to experience the historic duels as they were played out in the anime series, you should use the Story Deck for the campaign. However, if you just want to get through the campaign as fast as possible just to unlock the cards and DP rewards, then you should pick User Deck instead, especially if you have a nice, strong deck already made.

A well-constructed user deck will definitely help you get through the campaign faster, especially when you know how to play it. Otherwise, you’ll be playing with a new deck each level, and have to learn the cards as you go. It’s fun to relive iconic duels, but sometimes you just want to get those cards and DP and make your own deck.

Even if you surrender or lose a duel, you’ll get some DP as a consolidation prize. So if you’re in a rush for that precious DP, then you could just surrender on your first turn to get DP without having to go through an entire duel.

In the VRAINS campaign, when you go up against The Gore, the computer seems to prefer to go second if they win rock-paper-scissors, so use that opportunity to your advantage. This matchup awards around 900 DP as a consolidation if you forfeit. Simply rinse and repeat.

Check the tutorial if you don’t understand a mechanic 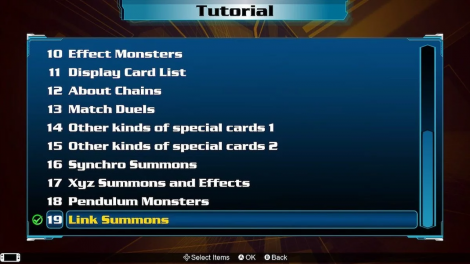 Since Yu-Gi-Oh! first came out, a lot has changed in terms of gameplay. With each new series, a new mechanic was introduced, with the newer ones being the most complex. Even if you’re a returning Yu-Gi-Oh! player (like me), the new mechanics may be a little confusing. Always make use of the tutorial if you need something explained! The tutorial does a great job of explaining how to do things and how it works in a step-by-step manner.

Hold down the B button to skip card response prompts

Whenever anything happens in Yu-Gi-Oh!, you can respond to it with an effect monster, spell card, or trap card, depending on what you have out on the field. The game does a good job of reminding you when you can respond to an action, but sometimes you just know you don’t want to activate something during the opponent’s turn. Each time the prompt comes up, you can press B to say no, but this gets annoying when you have to do it every few seconds.

Just press and hold the B button to skip all card response prompts during a turn. But make sure that you do this only when you absolutely know that you don’t want to respond to an action.

For the pros, there is a “Pro Mode” that you can activate in the settings. This mode has no prompts, and it’s up to you to tell the game that you want to respond to an action.

Take your time to plan out every move

Once you declare an action, you aren’t able to take it back or change your mind. With that in mind, just remember to take your time in the game. It’s also a good idea to never blindly rush into a duel — know and understand your opponent, and play to their weaknesses. 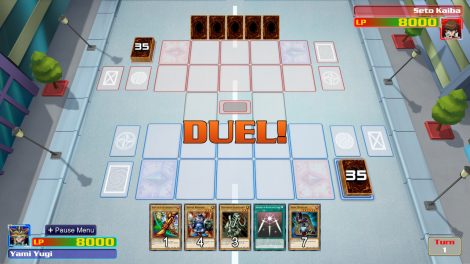 Take your time and plan out your moves. Since you can’t change your mind about something, those accidental button presses can sometimes make or break a duel.

These are just some useful tricks for getting the most out of the game.

Since the game does not use the real life booster packs, each set is centered around an anime character. Here is what you can find in each pack: