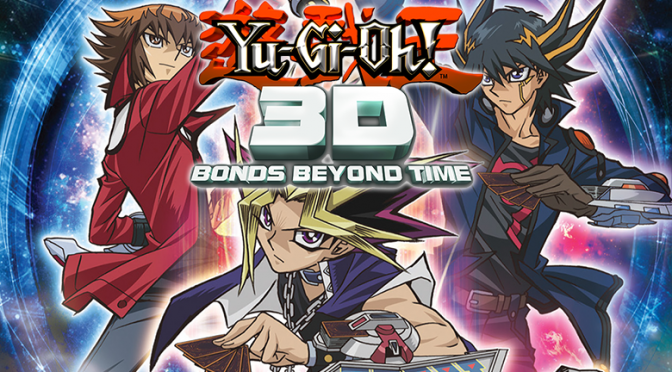 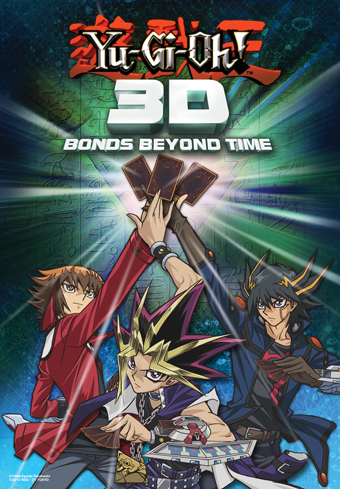 Here is some info on the upcoming Yu-Gi-Oh! 10th Anniversary Movie, Yu-Gi-Oh! 3D: Bonds Beyond Time, this coming 2011.

The promo poster for the upcoming movie is shown to the right.

In the future, the world has taken a turn for the worse. Civilization is on the brink of extinction. All hope of a brighter tomorrow has been cloaked with dark uncertainty. One man, however, thinks he can do something about it. With his world crumbling into chaos, a maniacal masked menace known as Paradox figures out a way to travel through time so that he can eliminate the scourge that he believes is responsible for causing his world to decay – the Duel Monsters card game! Paradox, determined to eradicate this perilous threat from the annals of time, begins rewriting the future by erasing the game — one card at a time.

Standing in his way are three legendary duelists who will do whatever it takes to save what’s on the line – their friends, their family and the game they love. For the first time ever, Yugi, Jaden and Yusei will team together and battle with all their hearts in a duel that will decide the past, present and future!

While riding with Jack Atlas and Crow Hogan, Yusei Fudo’s Stardust Dragon is captured by Paradox, a mysterious Turbo Duelist from the future, during a Turbo Duel and turned into a Malefic Monster. With the help of the Crimson Dragon, Yusei chases after Paradox as he enters a time slip, ending up in the past. During this time, Paradox duels against Jaden Yuki (Judai Yuki), who is still able to use the powers of Yubel and The Supreme King.

However, by this time Paradox had also captured Cyber End Dragon and Rainbow Dragon and overwhelms Jaden. He is saved thanks to Yusei and the Crimson Dragon. Jaden informs Yusei of Paradox’s true intentions. By stealing various monsters from across time and turning them dark, he plans to kill Maximillion Pegasus, the creator of Duel Monsters, preventing the game from being created and causing the events of all three series to never happen. Yusei and Jaden agree to pursue Paradox, which leads them to the past and causes a meeting with the King of Games, Yugi Muto.

However, by the time Yusei and Jaden arrive, Paradox had already attacked his time, killing both Pegasus and Solomon Muto (Sugoroku Mutou), Yugi’s grandfather, and had also managed to steal Blue-Eyes White Dragon and Red-Eyes Black Dragon. After explaining everything to Yugi, he agrees to join Yusei and Jaden and the three travel back 30 minutes before Paradox’s attack, to face him in an ultimate three-on-one duel, to free the trapped monsters, and to save both the world of dueling, and their future before it’s too late.

The title of the film will be Yu-Gi-Oh! 3D: Bonds Beyond Time. It will be in full 3D. The theme for the movie is called makemagic by jealkb (which the villain Paradox, played by Tamura Atsushi, is a part of).

Seeing as the title is Ultra Fusion, I can already see Neos fusing with everything it sees. Most likely a combined version of the three’s ace monsters. Most likely through Judai’s Super Polymerization card. 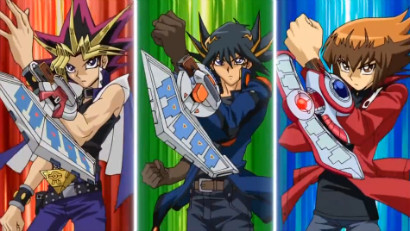 Most likely Pegasus and Yubel are to appear in this movie as well.. but other characters (such as Manjoume Jun, Jack Atlas or Kaiba Seto) are still not confirmed.

Dollow Rlance of Moreno Valley, Ca. has won our review contest and his review follows below:

On September 29 of 2001 the original Yu-Gi-Oh! series premiered in the United States, followed by its sequels Yu-Gi-Oh! GX and Yu-Gi-Oh 5D’s premiering on October 10, 2005 and September 13, 2008. Now ten years later on February 26 of 2011 the new movie, Yu-Gi-Oh! 3D Bonds Beyond Time, premiers in U.S. Theaters to the enjoyment of fans for the tenth anniversary of the series. Staring the three protagonist of the series, Yugi Muto of the Original Yu-Gi-Oh!, Jaden Yuki of Yu-Gi-Oh! GX; and Yusei Fudo of Yu-Gi-Oh! 5D’s joining together to stop a Duelist named Paradox from destroying the timeline, who comes from a future which has been destroyed by none other than the Duel Monsters card game, and wishes to change that by stealing the most power cards across time and killing the creator of the card game himself, Maximillion Pegasus.

As a movie of the Yu-Gi-Oh! series it is nice to see characters from the original Yu-Gi-Oh! and GX such as Yugi, Yugi’s grandpa and Pegasus, to Professor Banner, Yubel, and Pharaoh the cat in the main part of the movie, as well as most of the main cast of Yu-Gi-Oh! 5D’s, even the opening prologue showcases many of the events of the original Yu-Gi-Oh! and GX; which gives small cameos to many characters of the T.V. shows, and transitions into Yu-Gi-Oh! 5D’s events leading up to the movie. Another thing that was cool to see was Yusei’s nightmare of the destruction of Domino City, which giving him a sort of dark past and a character arc self-doubt that goes on until the end of the movie, which personifies the theme of determination to never giving up . Yugi and Jaden add a level of humor when interacting with Yusei wondering what a Synchro monster is, and all their conversations with each other; as they have very good chemistry when they work together as a team. Pegasus although only being in a few scenes, he was a very much a show stealer every time he appeared, with his dialog bordering on breaking the fourth wall, which is shared with other characters such as Yugi and Paradox. Paradox came off as a man of mystery with little to no back story, other than his future being in complete ruin because of the Duel Monsters card game, he never explains how it was ruin by the card game, but Yugi comments that “We (Yugi, Jaden, and Yusei) don’t care about your back story!” making the audience think that it really doesn’t matter, but still should have been shown.

Animation was a real treat to see with the monsters such as Stardust Dragon, and the return of both the Dark Magician and Dark Magician Girl, who surprisingly are given some speaking lines, and Elemental Hero Neos whose entrance was beautiful. The Cyber End Dragon attacking in the first scenes benefits from the 3D effects, surpass only by the 3D effect of Malefic World; which makes the background look like a galaxy is passing by, and the animation of the monster Kuriboh. Unfortunately the same cannot be said for the scenes that take up the prologue, since it is only 2D animation from the T.V. shows converted to look like 3D and stretch to fit the widescreen. The length of the movie if you count the opening prologue amounts to just under 60 minutes of screen time, so the movie feels a little rush; and could have been longer so that the extra time would be usable to explore Paradox’s attacks in the GX timeline or his back story, if not that at least more screen time for Yugi and Jaden; as this maybe the last time we see these characters in animation form.

The Three themes that run thought-out whole film are the themes of teamwork, determination, and friendship, with Yugi, Jaden, and Yusei the entire movie trying to defeat Paradox to save their timelines. Every time Paradox attacks any one of the heroes, they are completely beaten and only are able to stop Paradox from changing history is by supporting each other and believing that they will win, even near the end of the film where Yusei thinks they fail; Yugi and Jaden remind him that he should not give up and only regains his faith after he remembers all his friends who are counting on him to win and overcomes his self-doubt. After defeating Paradox the heroes return to their respective times and Yusei reunites with his friends, happy that they are safe, while Yusei looks to the sky believing that the future will not end in ruin as Paradox says it will and is determine to see to it that it doesn’t. True to form, teamwork, determination, and friendship play a big part in the movie, and with this being Yu-Gi-Oh! it can come off as corny to both simple and hardcore fans, but even so the fans would also be reminded why they love the various shows and are more likely to smile with their friends and the characters they love in the movie.

Watching Yu-Gi-Oh! Bonds Beyond Time as the tenth anniversary movie celebration, it is one of the best examples of paying respect to the history of the franchise and its fans. It has been a long road to get to the tenth anniversary and as the movie has shown there seems to be no end in sight, as the series is still popular as ever with its loyal fan base buying millions cards, as the movie is much better then what one would expect aside from a few things that could have been better; but there has never been a perfect movie, just very good ones and this is one of those movies. The heroes together at the end of the movie wishing each other luck; it is the same as the final message to the fans at the end of the movie after the credits, which embodies the movie itself since the heroes represents the fans, “Thank you for a decade of dueling”.