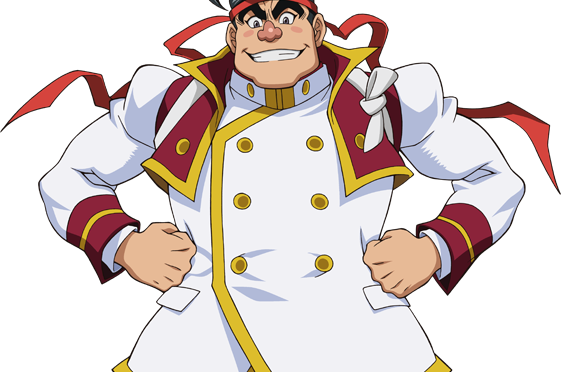 Gong Strong, known as Noboru Gongenzaka ( Gongenzaka Noboru) in the Japanese version, is is an old friend of Yuya Sakaki. He Duels using the “Non-Action” or “Heavystrong” style, known as “Steadfast” in the Japanese version, which means that even if he competes in an Action Duel, he refuses to search for Action Cards, standing firmly in the same spot. He is one of the Lancers. 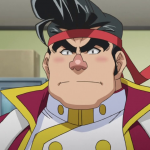 Though a teenager, Gong has a huge frame, easily equivalent in height to some adults. While he has a fairly round face, he is stockily built and rather muscular. Gong has black hair styled into a large pompadour, restrained by a red band, and his nose is somewhat redder than the rest of his face. There is a constant blush on his cheeks.

Gong appears to wear a Paradise Prep School jacket (albeit one that is more of a vest) over a buttoned white coat that has golden trim, as well as white pants. Gong wears a white sash crossed over his back, tied at the left shoulder. Gong wears heavy sandals rather than shoes. 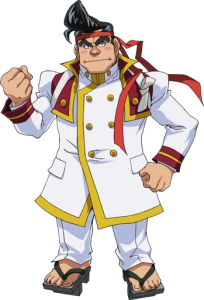 Gong Strong is generally somewhat gruff and proud. He has a short temper and is easily angered or antagonized, but despite this he generally speaks politely. In accordance with his speech pattern of referring to himself as “this man, Gong”, he often makes statements regarding himself and his fellows as “men”.

Gong is extremely loyal to his friends. Despite his pride, Gong is not above requesting aid nor congratulating his opponents, and has demonstrated a willingness to sacrifice himself in order to allow a team victory.

He isn’t particularly interested in entertaining audiences or be a commentator, although this is mostly attributed to his visible disgust at the arena, as he found it outrageous that Duels were used for illegal bets and the sheer amount of people that were motivated by greed, further showing his honor and discipline.

He is also shown to have little tolerance for injustice. 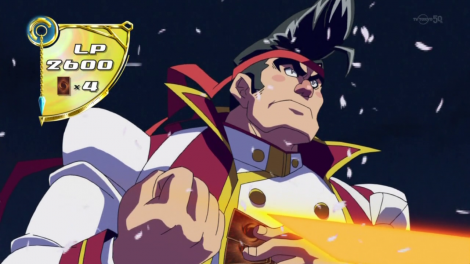 As a result of his “Heavystrong” training and muscular body, Gong is a very physically strong individual. He can endure attacks from Real Solid Vision monsters often without losing his balance, can stand still while holding very heavy boulders, do karate chops strong enough to destroy a Real Solid vision spike, and when he draws in his Draw Phase, he does with so much strength that he releases a strong force of wind. He is strong enough to punch a hole into a wall of concrete without injury. 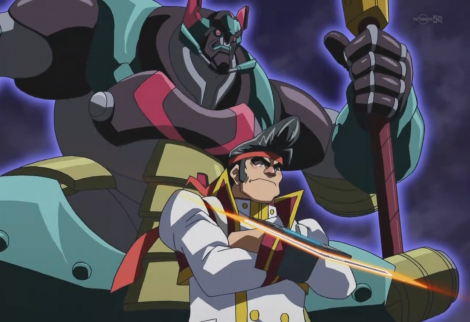 Gong Strong plays a “Superheavy Samurai” Deck. Unlike most Decks with a mixture of all three card Types (Monster, Spell, and Trap), Gong’s Deck is composed only of Monster Cards. Furthermore, his style requires that he have no Spell or Trap Cards in his Graveyard and thus he cannot use Action Cards as they would remain in his Graveyard after each usage. Because of this, Gong utilizes several monsters that activate their effects from his hand or Graveyard. Also, he uses monsters that can be played as Spells as a substitute and bypass the five-zone limit for actual monsters on the field. For battling, Gong relies heavily on defensive tactics, allowing his opponent to strike first to counterattack or and using high DEF to protect himself.

For actual attacks, he relies mainly on his ace, “Superheavy Samurai Big Benkei”, making him stock up on DEF-boosting cards to further strengthen this monster. By being able to attack using DEF instead of ATK for damage calculation, added with his monsters’ huge DEF power, Gong can effectively take down strong monsters and/or deal massive damage while still defending himself with very difficult to defeat monsters. As per his “Heavystrong” Dueling style, he seems to only rely on one monster at a time while the rest power it up and/or ensure that it’s never defeated.

After his DRAW against Kit Blade, he decides to incorporate Synchro Summoning into his Deck to further strengthen himself. Through this tactic, Gong can use his new ace monster, “Superheavy Samurai Warlord Susanowo”, which lets him make use of Spell Card effects without disrupting his normal Duel style by instead accessing the Spells in his opponent’s Graveyard. He also has the option of bringing out “Superheavy Samurai Ogre Shutendoji” to wipe out the opponent’s Spells and Traps so he can safely attack. Gong later acquires his own Pendulum Monsters after becoming a Lancer, allowing him to Pendulum-Synchro Summon.