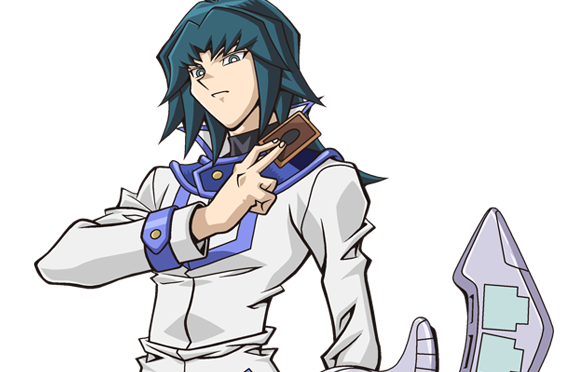 Zane Truesdale – The top duelist of Duel Academy in protagonist Jaden Yuki’s first year, Zane serves as one of Jaden’s rivals during the series’ first season, though he takes a more brutal approach to dueling after experiencing a transformation of mind in the second season. In subsequent seasons he develops fatal heart conditions and seeks an opponent worthy enough to give him his final and greatest duel before he expires.

In the timeline of the Yu-Gi-Oh! GX anime Zane is the stronger older brother of Syrus Truesdale who lives in the Obelisk Blue dormitory at Duel Academy along with Alexis Rhodes, and initially Chazz Princeton. Zane is highly respected, and a Duel with him is reserved only for the elite. For the early part of the first season, he aids his friend Alexis in searching for her lost brother and his former rival, Atticus Rhodes. In the original version, he is nicknamed “Kaiser Ryo-” (Kaiza- Ryo), while in the English-language manga, Zane is dubbed “Zane ‘Kaiser’ Truesdale” and “Kaiser Truesdale.”

Personality-wise, Zane is calm and collected, with a deep respect for his opponents and his own cards. He feels that the connection between a duelist and his opponent, as well as the duelist himself and his deck, make victory meaningful, though he is somewhat more harsh in the English version than his Japanese counterpart.

When Syrus was younger, he almost used the card Power Bond without thinking during a Duel. He was stopped by Zane who revealed that if he used it, he would have lost the Duel at the end of his turn because of the card’s drawback. Paying off Syrus’ opponent to end the Duel, Zane sealed the card away, stating that his brother could only use it when he was truly ready. Syrus, believing himself to be a disgrace to his older brother, did not unseal the card until much later after his friend Jaden Yuki faced off against Zane. During that duel, Zane handed Jaden one of only three on-screen losses during the duration of the anime.

Zane was selected by Camula, the second member of the Shadow Riders, as a victim of her Shadow Duel. Though he easily overpowered her, the vampire forced him into an intentional loss by offering his brother’s soul as payment for her Illusion Gate card. As a result, he was turned into a doll for a short period of time, before Jaden managed to defeat Camula. He later faced Jaden in a rematch, choosing him as his opponent for his ceremonial graduation Duel. This time, the two tied. Zane went on to compete in Duel Pro League after his graduation.

A fan favorite in the Pro League, Zane suffers his first true loss at the hands of Aster Phoenix, who continuously tells him that his defeat is “predetermined by destiny.”. The battle takes its toll; from then on, Zane finds himself trapped perpetually in a losing streak. He is approached by Mr. Shroud, a promoter who offers him the chance to redeem himself, and although reluctant at first, Zane ultimately accepts.

Zane is soon pitted against Mad Dog in the “Underground Duel,” a competition in front of a shady audience wherein both contestants are sealed inside a cage and forced to wear electrodes that shock them each time Life Points are depleted. Zane wins the duel and comes to believe that his former philosophy of respecting the opponent above the desire to win is flawed. Frustrated and desperate, he resorts to cruelty and aggression, and practically destroys the dueling ring. The next time Zane is seen, he has donned a dark outfit, and is referred to by the public as “Hell Kaiser Ryo” (Heru Kaiza- Ryo) in the Japanese version.

Zane would then travel into the mountains after casting off his promoter to confront Sheppard in the dojo where he was brought up dueling, hoping to acquire the forbidden Underworld (Cyber-Style Tails (Saiba- Ryu- Ura) in the original Japanese language version) deck that existed opposite of his own Cyber Dragon deck, a goal he accomplishes in betraying Cyber End Dragon. The Underworld deck was said to be forbidden, which is why it was sealed away. It’s later revealed that the deck causes heart problems in those who use it. Believing that he would regain the respect he once held for others during the GX tournament, Sheppard gave him a medal that allowed him to participate. Zane combined his original deck with elements of the Underworld deck to form the deck he would use for the remainder of the series. 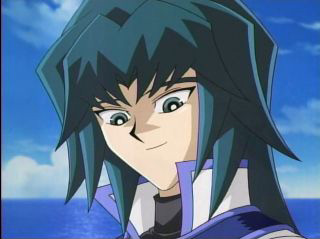 Shortly thereafter, Atticus, Zane’s former best friend, dueled him under the impression that his friend had fallen to the dark side, much like himself when he was taken in by the Shadow Riders, using the deck of Nightshroud to symbolize his belief that, just as he was able to break free from the darkness that had corrupted him, so too could Zane. Using his new deck, Zane easily dispatched his opponent, causing the dark power of Nightshroud to once again envelop Atticus as he lost faith in his friend’s salvation. Though upon Zane winning the duel, Nightshroud was again vanquished. Zane, however, told him upon his defeat that there was no darkness in his heart, and that his only wish was to achieve victory through unrelenting force and the accumulation of power. In truth, the monster that others perceived him to have become was merely born of his inability to cope with failure and not of some dark power.

Zane approaches Aster for a second Duel, but Syrus intervenes and demands to be his opponent instead. Similar to his previous Duel with Mad Dog, both players wore electrodes, subject to intense physical punishment. It becomes clear that, in his current mindset, Zane spares no one; he is cold, ruthless, and sadistic, regardless of who his opponents are, and enjoys seeing others suffer. Despite Syrus’ efforts to defeat his brother, Zane defeats him in the end. While making his exit, he states that if there is anything he respects at all anymore, it is only victory itself. He appears again following a brief run-in with the disguised Blair Flannigan, giving her his tournament medal as he is no longer interested in participating, and leaves Duel Academy.

During the third year, Zane is enlisted by Dr. Eisenstein to battle Jesse Anderson in order to collect enough Duel Energy to open a wormhole through which the Rainbow Dragon card can be sent to the alternate dimension where Duel Academy was transported. The duel is not completed, as enough energy is produced. By this time, prolonged usage of his Underworld deck (originally believed to be his use of electrodes) has left him with fatal heart conditions. Zane later duels with Jesse a second time (who by now is under control of Yubel) in order to fulfill his wish of having a great final duel, but loses and is held captive in another dimension by Yubel.

After Yubel’s defeat, Zane is found unconscious on Duel Academy’s shores in the fourth season and is then brought to the infirmary to recuperate. However, he is challenged by a duelist named Makoto Inotsume, who wants to destroy all Cyber-Style duelists, as he is a Psycho-Style duelist, a dojo that exists as the chief rival of the Cyber-Style. The duel is too strenuous for Zane and he collapses. He gives his deck to Syrus, who defeats Inotsume with it after combining the deck with elements of his own Vehicroid deck. Zane allows Syrus to keep the deck, and states that he will be build a new deck, with his new goal being to surpass Syrus, who he now views as his superior.

In the manga, Zane is an exchange student to the United States and returns to Duel Academy from there with two attendants. A tournament is subsequently started, with the winner being able to duel Zane.

During the first year, Zane plays a Cyber-Style deck composed of Cyber Dragons, representing yang, the active and bright force in the universe. Zane was an expert at combining his three Cyber Dragons into their two Fusion forms, with Cyber End Dragon being his strongest card, and could consistently strengthen them to high levels with his signature Spell, Power Bond. After visiting Sheppard in the mountains during the second year, he took the Underworld deck, representing the dark and passive yin, that was sealed away in his former teacher’s dojo. He combined cards from both decks into a single deck that relied on the Cyberdark monsters and discarding cards to the Graveyard to power up Cyberdark Dragon. The design of cards in the Cyber Dragon and Cyberdark series has links to Chinese mythology, with such references present throughout his deck, including mentions of the Chinese dragon, Qilin, and Fenghuang.