NOTE:The American version was combined into one episode called “Panik Attack”.  The complete version is available on the second volume of the VHS/DVD collection, “Evil Spirit of the Ring”. All other countries received the episode in its two-part form, which was also released on VHS and DVD in the US, but it eventually aired on 4Kids TV on January 13, 2007.

With both duelist convinced that they can still win the duel, it seems like victory could go either way depending on the next few turns. With Yugi prepared to activate the Swords of Revealing Light, it could all be over for Panik’s intimidation tactics, however every duelist must have a back-up plan. Panik plays the King of Yamimakai, he attacks Yugi’s Curse of Dragon, hoping to wipe it out. However sa the attack rushes towards Yugi’s monster, it is drawn away by the Spell Binding Circle, destroying Panik’s own Reaper of the Cards instead, reducing his life points to 494. With Panik’s monster destroyed, Yugi decides the time has come to activate the Swords of Revealing Light, revealing all of Panik’s monsters and sealing them where they are for three whole turns.

With Panik’s side of the field once again visible, Yugi is able to see what Panik’s other two monsters are: Barroks and Dark Chimera. However as Yugi’s plan begins to come together, Panik throws a spanner in the works as he plays equips the Castle of Dark Illusions with the Chaos Shield, a forcefield that protects his monsters from any attack Yugi might throw at them. As Mai worries that Yugi won’t be able to win, Yugi warns Panik that intimidation and cowardice won’t help him win. A furious Panik activates the flame thrower stationed either side of Yugi, but he dodges them with ease, hardly breaking a sweat. As a game of mental warfare begins, Yugi uses Polymerization to fuse his Curse of Dragon with Gaia the Fierce Knight to form Gaia the Dragon Champion. Panik plays the Metal Guardian onto the field, but refrains from attacking with it, and as Yugi’s final turn begins his friends wonder whether he will be able to defeat Panik after all. As Yugi plays the Catapult Turtle, he uses it to fire his Dragon Champion into the Castle of Dark Illusions. However as the smoke from the blast clears, Yugi’s Champion is gone, reducing his life points to 300 while the Castle has merely lost its flotation ring

As Panik mocks Yugi’s fruitless claim to defeat him in five turns, Yugi warns him that he will still win before Panik’s turn begins. As Yugi finishes his turn, the Swords of Revealing Light begin to fade, releasing Panik’s monsters from their paralysis. However as Panik prepares to make his move, Yugi points out that without a flotation ring the Castle is no longer able to stay airborne. As the Castle plummets to the ground, Panik’s monsters are trapped by the Chaos Shield, preventing them from evading the Castle’s impact. The impact destroys Panik’s monsters, reducing his life points to zero. A furious Panik uses the flame thrower in an attempt to destroy Yugi, but the power of the Millennium Puzzle protects both Ygi and his friends from the flames and as the flames clear, Yugi uses the Millennium Puzzle on Panik to seal away the dark side of him.

With Panik defeated, Yugi tries to give Mai back her star chips, but she refuses to take them even though that was the only reason Yugi dueled Panik in the first place. But as Joey jokingly offers to take the chips instead, Mai gets annoyed with him and orders him to give them to her. Joey willingly does so, explaining that she should stop being so defensive and start trying to like people. With her star chips back in the dueling glove, Mai promises Yugi that she will repay him for what he has done and the two agree to look forwards to eventually dueling each other, whenever the time may come to do so. 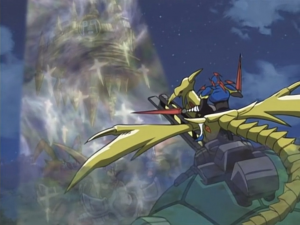