Things were looking bad for Joey. With three zombie cards, and Bones adding all kinds over zombie power ups to them, Joey couldn’t kill any of them without getting hurt himself. Meanwhile, Yugi and company were still searching for Joey. Baccura accidentally steps on a switch, which triggers an Indiana Jonesish boulder scene to ensue. A HUGE boulder chases them all to a dead end. After it runs down Baccura, Tristan tried punching it, and it just pops, revealing itself to be a balloon boulder with a speaker.

It would appear that Pegasus wanted to scare someone, and he got all the screaming on tape. Back at the duel, to make things worse, Bones sends out the Ghost King, which injects ectoplasm into the zombies to power them up even more (for those who don’t know, ectoplasm is a substance which often appears out of no where in so called “haunted houses”). Joey gets his time wizard, but the spinner hits the skull, and all of Joey’s monsters are killed. Now, Yugi finally finds Joey, and helps him out. It goes down to the wire, but Joey wins. Bandit Keith, in a rage, steals all of Bone’s and his other henchmen’s star chips, and heads for Pegasus’s castle, as he now has 10 star chips. Joey and Yugi only need a few more themselves, however. 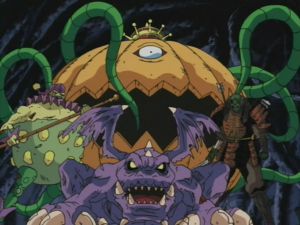