Yugi and his friends tried to push off the boulder, but they couldn’t. Suddenly, Bakura’s ring glow and it point the way. Yugi and his friends follow the direction the ring is pointing then they encounter Para and Dox known as the Paradox brothers. They announced that they have to duel together in a double duel. Then Yugi transforms to Yami Yugi. Then Yami Yugi picked Joey to be his partner, then they also announced that if one duelist lose all 2000 life points, the other person loses also.

The Paradox brothers started by playing Labyrinth Wall which turns the field into a maze. But the catch is that the opponents’ monsters can only move the number of steps corresponding to the level of the monster. Yami Yugi plays Beaver Warrior and it took six steps. Dox Then plays Shadow Ghoul polymerize with Labyrinth Wall to make Wall Shadow, which can glide on the walls and can strike anytime. Then it kills Beaver Warrior lowering Yugi’s hp to 1600. Joey Then plays the Axe Raider and one card face down. Now it’s Yugi’s turn and he plays Celtic Guardian in attack mode.

Para tells Wall Shadow to attack Celtic Guardian, but then Joey reveal his faced down card which was Kunai with Chain, now when the Kunai with Chain is active, Yugi and Joey’s Monsters get 600 more attack points. Then Celtic Guardian destroy Wall Shadow, leaving Dox with 1800 HPs left. Then Dox played Labyrinth Tank and Jurai Gimo a monster that lays his spider web on the labyrinth floor and whoever steps on the floor with the Jirai Gimo web symbol, that monsters get destroy by Jirai Gimo.
TO BE CONTINUED… 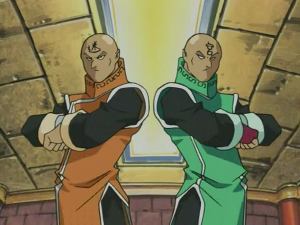 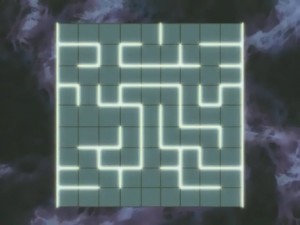