As Kaiba continues his duel with creator Pegasus, Yugi tells the others about the power of Pegasus’s Millennium Eye and how it allows Pegasus to see the cards Kaiba is holding. The others doubt what Yugi is saying, but Joey seems to think that if the Millennium Eye really has such powers there will be no way for Kaiba to win. Yugi disagrees with this, reminding Joey that Kaiba is the champion of the game and hopefully has a reserve plan to help him win from behind.

Meanwhile, Kaiba is also beginning to realize the power of the Millennium Eye, but still believes that he can win by playing the cards in his hand. Playing a second monster in defense mode to aid his Rude Kaiser, the champion can do little but wait for Pegasus to make his move.

As Pegasus begins his turn, rather than playing a card he decides to take a time out to reminisce about his favorite cartoon show, “Funny Bunny”. As Pegasus recalls the mishaps of the cartoon bunny, Kaiba calls for him to stop talking and start playing, so Pegasus does just that, playing his next card, the Toonworld. With its new haven inside the covers of the cartoon world, Pegasus’s Dark Rabbit is protected from all of Kaiba’s attacks but can still emerge to attack. Crushing Kaiba’s Battle Ox, the rabbit then retreats back inside the book until Pegasus’s next turn. Kaiba, unable to attack the Dark Rabbit, plays one card face down and then ends his turn. Not content with the fortress-like protection of the Toonworld, Pegasus decides to show off the card’s power further by playing the card that he took from Kaiba turns before. But as he plays the Blue Eyes White Dragon, it merges with the habitat of Toonworld and emerges as a Blue Eyes Toon Dragon, a cartoon monster with the power of its normal counterpart. The Dragon attacks the Rude Kaiser, destroying Kaiba’s last defensive monster.

Shocked but not yet beaten, Kaiba begins to realize that Pegasus can see the cards in his hand and so decides to discard his current hand, playing instead the top card from his deck. Trusting in the heart of the cards, his faith is rewarded as he draws a second Blue Eyes White Dragon. But as Kaiba attacks the Toon Dragon, another of the Toonworld’s rules becomes apparent as the Toon dodges the attack. Pegasus informs Kaiba that like “Funny Bunny” in the TV show, his Toon Monsters cannot be damaged by any attack.

From the side lines, the gang questions the legality of playing with the Toonworld card. Yugi admits that the Toonworld card was never released on the open market because it was too powerful and that Pegasus’s version must be the only one. Meanwhile it is Pegasus’s turn again, but with Kaiba playing “blind”, Pegasus turns his tactics to seeing into Kaiba’s mind and his knowledge of his deck.

Adding yet another layer to the Toonworld, Pegasus plays the Shine Palace, a card that energizes all Toon Monsters with its radiant light. The powered-up Toon Dragon attacks, but is blocked by Kaiba’s Negate Energy magic card. As what could be his last turn begins, Kaiba must place all of his trust into the cards. Playing the Shadow Spell, he successfully traps the Blue Eyes Toon Dragon before destroying it with the original Blue Eyes, reducing Pegasus’s life points to 1200.

Furious that Kaiba has destroyed one of his precious Toons, Pegasus retaliates by playing the Dragon Capture Jar. Absorbing the second Blue Eyes inside, the jar’s defense points rise to that of the Blue Eyes. Kaiba is unwilling to relent and plays a monster in defense, but on Pegasus’s turn he plays the Dragon Piper. As the Piper begins to draw the Blue Eyes, trapped in the Dragon Capture Jar, under Pegasus’s control, Kaiba attacks, hoping to shut down the Piper. But as the Sword Stalker prepares to strike, Pegasus reveals his Doppelganger card and uses it to clone Kaiba’s Crush card. Infecting the Dragon Piper with the virus, Kaiba’s attack leaves his entire deck infected. With every monster except for one infected by the virus, Kaiba has no choice to revive Saagi, the Dark Clown with the Reborn the Monster card. But as Pegasus prepares for his final attack, Kaiba realizes that it is hopeless and that he is about to lose. As the Dark Clown is destroyed, Kaiba loses the last monster not infected by the virus and has to forfeit the match.

As Pegasus gloats and taunts Kaiba for losing the only chance to save his brother, he reminds Kaiba that his soul now belongs to Pegasus. Drawing a blank card, Pegasus uses the Millennium Eye to seal Kaiba’s soul within the shadow realm inside the card. Shocked and distraught at Kaiba’s defeat, Yugi Yama threatens Pegasus, warning him that soon the duel between the two of them will begin and with it will come Pegasus’s final defeat. Intrigued by the power of the Millennium Power, Pegasus reminds Yugi Yama that in order to earn the right to fight him, he must first defeat the other finalists in the last rounds of the tournament. But will Yugi be able to win the right to fight Pegasus when he must go up against his friends, Joey and Mai? 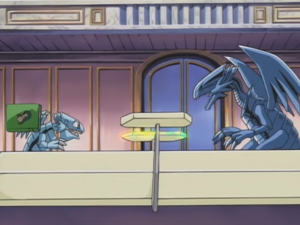 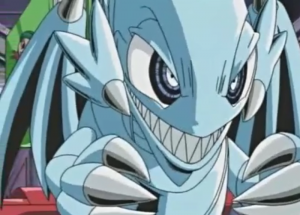