Just as the duel between Joey and Bandit Keith is about to begin, Joey realizes that he doesn’t have his qualification card. The referee gives Joey five minutes to find the card. Joey searches his room for it, but, of course, he can’t find the card because Keith stole it. Just as Joey’s about to give up, Mai appears and gives Joey her qualification card, as he needs it more than she does. Joey returns to the area, and Bandit Keith wonders how Joey got the card.

Keith starts of the duel by placing a monster face down. Joey does the same. Keith flips face-up his Pendulum Machine (1750/2000) which destroys Joey’s face down Battle Warrior (700/1000). Joey summons Giltia The Magician Knight(1850/1500) and it attacks Keith’s Machine, but the attack does nothing. Keith then reveals that his machine monsters are immune to magical attacks. Keith summons Launcher Spider (2200/2500) which destroys Giltia (JLP 1650).

Joey plays Axe Raider in defense mode and ends his turn. Keith is about to play a card face down, but he ‘accidentally’ drops it onto the field, revealing it to everyone. Keith then picks up the card and puts it face down. He also plays another card face down. Yugi feels it’s a trap, but Joey summons Flame Swordsman (1800/1500) and powers it up with Salamandra (2500) and it attacks the face down Zoa (2600/1900), but Keith activates the Magic Metal Force trap card, turning Zoa in Metal Zoa (3000/2300), making it immune to the Flame Swordsman’s attack. On Keith’s turn, he has Metal Zoa attack and destroy Flame Swordsman (JLP 1150). Joey places a card face down and ends his turn. Keith plays Stop Defense to switch Axe Raider to attack mode. Metal Zoa attacks Axe Raider, but Joey activates the Spiked Pit trap. Metal Zoa falls into the pit, thus destroying it, and dealing 1/4 its attack power to Keith’s Life Points (KLP 1250). Joey then summons Garoozis (1800/1500) in attack mode and it destroys the Pendulum Machine (KLP 1200). Joey also places a card face down.

Keith has Launcher Spider attack Garoozis, but Joey activates Kunai With Chain, ensnaring the Launcher Spider and increasing Garoozis’ attack by 500 (2300). Garoozis then destroys Launcher Spider (KLP 1100). Tea says that she’s never seen a duel when the Life Points were this close, but Keith vows to defeat Joey.

Will Joey defeat Keith and his mighty Machine monsters, or will he be eliminated and lose his chance to save his sister, Serenity Wheeler?
To Be Continued… 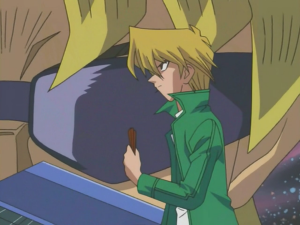