As the flying machine rises up out of the ground, Yugi, Joey, and Mai wave good-bye to the people of Simlou. Eirro flies up and joins Yugi as Joey takes command. As they are attacked by several duel monsters, Mai summons the Harpie, Joey summons Giltia, and Yugi the Dark Magician. But a monsters comes straight for Yugi and before the Dark Magician can reach him, it prepares to strike. But Eirro gets in the way and is hit instead. 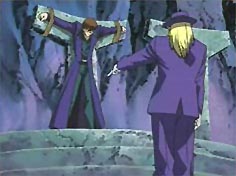 The Dark Magician destroys the monsters as Yugi watches sadly as Eirro vanishes, destroyed. Yugi transforms into Yami Yugi, having had enough of the virtual world. They penetrate the barrier, but are hit with a blast from the castle. The all hop on the Winged Dragon as the flying magician falls.

Meanwhile, the Whitty Phantom returns to Kaiba and shows him the second offering, Mokuba. Mokuba, however is far from ready to be sacrificed and summons the Swordstalker who frees Kaiba. Kaiba then summons the Blue Eyes and destroys the phantom. As they head out into the hall, they run into a bunch of armed ninjas. After defeating them and freeing the Blue Eyes that was trapped within their capture jar, Mokuba explains to Kaiba that to get into the game, he had to get help from Yugi and Joey.

Kaiba is upset that Mokuba had to get Yugi’s help but they continue on their way out of the cave. Meanwhile, Yugi and the others destroy a bunch of insects and then meet up with Kaiba and his brother.

The directors of Kaibacorp then reprogram the game and summon the Mythic Dragon. The group decide to use their strongest dragons, as the dragon seal prevents any other creature from attacking. They attempt to attack Mokuba, but Joey uses his red eyes black dragon as a blockade, but in the process he looses all his life points and disappears. Mai angrily orders Harpie’s Dragon to attack, but it is destroyed and all of her life points with it. As she vanishes, Yugi summons the black luster soldier, but it is barred from attacking because of the seal.

He asks Kaiba to summon the ultimate dragon, but Kaiba tells Yugi that he doesn’t need to do anything Yugi says and can win by himself. But the Mythic Dragon launches another attack straight at Kaiba and to protect his brother, Mokuba pushes him out of the way and is hit with the blast. As he falls, Kaiba reaches out to catch him but he disappears before he reaches his arms. As Kaiba sadly falls the the ground, Yugi pleads with Kaiba to summon the dragon. Kaiba agrees and summons his monster. Yugi then fuses it with the Black Luster Soldier and they obliterate the Mythic Dragon.

The two wake up back in the city, where Adina and her people thank them for saving the city. Kaiba doesn’t care, having lost his brother, and Yugi tells them that the real heroes aren’t them, but Joey and Mai who were killed. Adina then turns into the Mystical Elf, and revives all three of the fallen friends and Eirro as well. As an exit portal appears, Kaiba tells Yugi that he is grateful for his help, but they still aren’t friends. Yugi wonders what Kaiba has against him, but Kaiba and Mokuba leave.

Yugi and the others wake up just as Kimo and the other guards break in. Mokuba taunts the guards, telling them that his brother is free too. As they run off to stop Kaiba, Mokuba thanks Yugi, Joey, and Mai for their help and runs off to catch up with his brother.