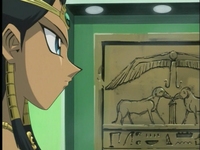 Téa and Yami are searching through the museum for clues. Yami senses something unusual coming from the museum’s basement, so he heads down there to find out. He says that something is calling for him. The two of them walk into the basement and right in front of them lies the stone carving. Téa and Yami walk up to it, and they see the Pharaoh, which resembles Yugi, carved right on it. Around the Pharaoh’s neck is the Millennium Puzzle, the same puzzle that Yami has. Yami states that this is exactly what he was looking for, but he wishes that he could decipher its meaning. Téa is surprised by their findings and is starting to freak out by it. Yami finds out from the carving that he was involved by an ancient form of Duel Monsters.

Suddenly, Ishizu comes out and states that she has been expecting him. She reveals her Millennium Necklace to Yami. She tells the Pharaoh that 5000 years ago, evil sorcerers tried to take over the world. However, one king was able to stop them all. That king was the Pharaoh himself, Yami. Ishizu also explains that destiny will repeat itself, the same evil will resurrect once again, and it’s up to Yami to stop it. She tells him that a Duel Monsters tournament will begin and that if he wins, he’ll have many more answers. An invitation to the tournament will be waiting for him when he returns home. Ishizu then walks away. Téa is amazed that the Pharaoh’s real name is Yami and that he once saved the world 5000 years ago. Yami takes another look at the stone carving again and realizes that the evil sorcerer looks exactly like Kaiba. Yami knows that he has one mission: to win that Duel Monsters tournament.

Meanwhile, Kaiba is testing his new Duel Disk system for his tournament. Kaiba’s assistant states that all safeguards have been removed for the testing. Mokuba tells Kaiba that without the safeguards, the monsters from the testing can really hurt him. Kaiba ignores Mokuba’s warning and tells himself that he must thoroughly test his new system to make sure the tracking features work perfectly. Kaiba also wants to test his new Egyptian God card, so that he can beat Yugi with it. The dueling robot has been engaged for the testing process. Included in it are Kaiba’s new tournament rules and his deck from Duelist Kingdom. This means that all three Blue-Eyes White Dragons are in the robot’s deck! Mokuba is worried that his big brother will get injured. So Kaiba launches his hologram projectors from his duel disk. With these projectors, dueling arenas are not needed. Then the duel begins.

Kaiba and the dueling robot each start out with 4000 life points. The dueling robot draws a card and then sets one monster in defense mode. Now it’s Kaiba’s turn. Kaiba sets one card face down and then summons Battle Ox. Battle Ox attacks and destroys the robot’s face down monster. It happens to be a Cyber Jar. Cyber Jar’s effect destroys all monsters on the field. Then both players must summon as many Level 4 or below monsters as they can from their hands. The duel robot sets two monsters down in defense, and Kaiba summons four monsters: Maha Vailo, Dark Zebra, Boar Soldier and Hitotsu-Me Giant. Mokuba calls the duel robot a “digital dummy” since it gave Kaiba a huge lead with monsters. The robot then initiates Kaiba’s new tournament rules and sacrifices its two face down monsters to summon Blue-Eyes White Dragon. Kaiba is surprised that the duel robot already mastered his new rule to summon Blue-Eyes White Dragon. However, the duel robot doesn’t declare an attack because it thinks Kaiba’s face down card is a trap intended to destroy the monster.

It’s Kaiba’s turn now, and he sacrifices Hitotsu-Me Giant to summon Dragon Seeker in defense mode. Kaiba tells himself that his new monster’s special ability will allow it to destroy a Dragon-type monster instantly when it swithces from defense to attack mode. So he plans on activating that ability on his next turn. The duel robot knows about Kaiba’s strategy. It places one card face down and then summons Lord of Dragons in attack mode. Lord of Dragons’ special ability protects all Dragon-type monsters from monster effects, Magic and Trap cards. Dragon Seeker’s effect is negated. Since Kaiba can’t do anything to stop the Blue-Eyes White Dragon, he switches all of his monsters to defense mode to save his life points. The duel robot’s turn begins again, and it plays the Magic card Flute of Summoning Dragon. Kaiba is shocked by the robot’s move because it can now summon two Dragon-type monsters from its hand. The robot summons two Blue-Eyes White Dragons onto the field. Then it fuses them all together with the power of Polymerization, forming Blue-Eyes Ultimate Dragon. However, due to Kaiba’s new tournament rules, fusion monsters cannot attack on the turn they are created, so the duel robot ends its turn. 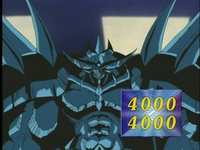 Kaiba’s assistants think that Kaiba is doomed. They don’t know about Kaiba’s Egyptian God card, Obelisk the Tormentor, and an attack from Blue-Eyes Ultimate Dragon could cause serious injury to Kaiba. Mokuba tells Kaiba to end the duel now, but Kaiba doesn’t listen to him. Kaiba is thinking about how much fear Yugi felt when he faced his Blue-Eyes Ultimate Dragon at Duelist Kingdom. He realizes that in order to beat Yugi, he must defeat the Blue-Eyes Ultimate Dragon. So Kaiba draws a card, and it happens to be his Egyptian God card, Obelisk the Tormentor. Kaiba sacrifices three of his monsters and summons his powerful beast. Kaiba then uses Obelisk’s special ability. He sacrifices his two remaining monsters to increase Obelisk’s attack strength infinitely. Kaiba’s assistants and Mokuba are surprised at Obelisk’s power. Obelisk the Tormentor completely obliterates Blue-Eyes Ultimate Dragon with one attack, and the duel robots life points drop to zero. Obelisk’s power is so high that it causes Kaiba’s computers to crash. Kaiba has now seen the power of his Egyptian God card, and he can’t wait to defeat Yugi with it.

Yami has received his invitation to the new Duel Monsters tournament. So he and Téa are waiting in Domino City for the tournament details to be officially announced. Yami knows that he must win the tournament in order to unlock more details to his past. Téa just wants Yami to promise to be careful. Yami understands and states that his deck has never let him down before, and that he and Yugi can win the tournament together. Yami suddenly hears a strange, evil laugh. Téa asks Yami if he’s okay, and Yami says that it’s nothing. Suddenly, Mai calls out for them and says hello. She asks Téa if her and Yugi are dating. Téa replies that she and Yugi are just friends. Yami asks Mai if she is also here for the tournament. Mai tells him that she is, but she has no idea who is hosting the tournament. All the invitations were sent anonymously. However, there’s rumor on the street that it’s someone with a lot of money. Mai thinks it’s Kaiba. Yami suddenly understands why Ishizu wanted him to enter the tournament: he must face Kaiba in a duel. Yami states that the tournament is going to be Duelist Kingdom all over again. Téa and Mai agree. They spot Weevil Underwood and Rex Raptor hanging around. Mai spots Espa Roba, a duelist who supposedly uses psychic powers to duel. Téa also sees Mako Tsunami.

Suddenly, Kaiba’s face appears on every television in Domino City. Kaiba welcomes all the duelists that received an invitation to his new, exclusive tournament. Kaiba states that each duelist will be dueling with his new Duel Disk system and that the loser of each duel will have to forfeit their best card to the winner. Mai says that losing even one duel could ruin her deck. Kaiba then appears in his helicopter. He tells everyone to make sure they register and pick up their new Duel Disk because in one week the tournament begins.

Meanwhile, a group of men who are dressed in robes tells their master about the Battle City tournament. The master, the keeper of the Millennium Rod, refers to his men as Rare Hunters and he orders them to go to Battle City at once.