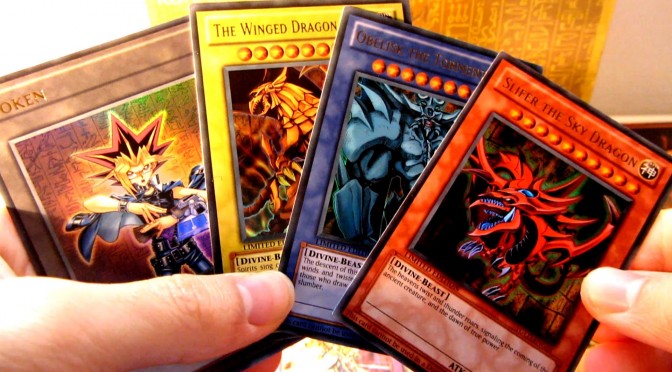 First, there was Pokemon.
Now, there’s a new game craze drawing kids to a local pizza parlor. And it doesn’t have anything to do with pepperoni.

Every Saturday, youngsters meet for Yu-Gi-Oh!, a card game that features images of giant monsters, powerful magic and ancient Egyptian legends. About 50 to 100 youngsters gather at a local CiCi’s Pizza in Tampa Bay, Fl to play the game from 9 a.m. to noon.

“We started out with Pokemon tournaments, and now we are involved with the new craze of Yu-Gi-Oh!, where the kids battle with cards,” said Sheena Vance of Lithia. She and her husband, Randy, run the program.

“I think that it is a great learning game. It teaches kids to stop and think about their actions and how to get out of bad situations,” Sheena Vance said.

The game is a duel set in ancient Egypt. Players must protect their “life point” from the enemy, while at the same time trying to conquer their opponent by reaching their life point.

“This game is really cool because it has magic and trap cards. It also has rituals and higher attacks, which makes it a bit harder than other card games. It is definitely more challenging,” said Cory Kusiak, 11, of Plant City.

The Saturday battles at the pizza shop have grown in popularity. Vance said only between 15 and 20 kids were playing Pokemon before the switch to Yu-Gi-Oh!.

“We come here and duel. We also trade good and bad cards. I am into cards. I like Yu-Gi-Oh! better than Pokemon because this has better monsters,” said Frank Flores, 12, of Plant City.

The kids are charged $5 to get in and get a pizza buffet. Parents are not charged.

“I thought it was a great idea. The whole image we try to portray is that of a family- oriented restaurant. I also do not think there is enough for the kids of Plant City to do, and this gives them something,” said manager Mike Trnka, who opens the doors early every Saturday for the kids.

Kids don’t just get to play and trade cards. They can buy new cards at a discounted rate from Randy Vance. Vance said he buys the cards wholesale online.

The game was first played Japan in 1996. Yu-Gi-Oh!, which roughly translates into “Game King,” began as a comic strip in a Japanese magazine called Shonen Jump.

The game pits different mystical creatures against one another in magical duels on a shifting battlefield filled with traps and magical pitfalls. When the haze of battle clears, only one can be called Yu-Gi- Oh! King of Games.

Mark Irwin, a game developer manager with Upper Deck Entertainment, said the California-based international company brought Yu-Gi-Oh! to America in March. Upper Deck manufactures the cards and also has a Web site, www.upperdeck entertainment.com/yugioh/ “It is a good game for pre-teen kids. It has a lot of math, strategy and reading,” Irwin said.