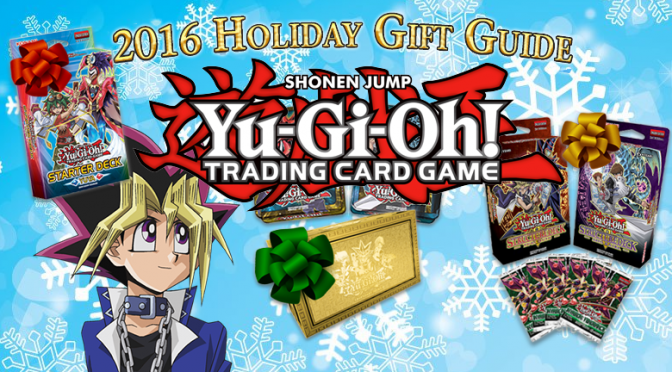 El Segundo, Calif. (November 18, 2016) – Konami Digital Entertainment, Inc. (KONAMI) has made it easier for those who are busy making their lists and checking them twice, as the company once again offers plenty of holiday offerings for beginning and veteran players of the ever-popular Yu-Gi-Oh! TRADING CARD GAME (TCG). Mass market and hobby stores nationwide have fully-stocked shelves of Yu-Gi-Oh! TCG products and accessories and are ready for gift-givers to come in and find the perfect assortment of new and exciting presents this festive season.

Vying to be the first package to be unwrapped, the 2016 Mega-Tins celebrate the original heroes of Dueling, Yugi and Kaiba, and are a perfect choice for any Duelist. Available in two cool designs; the Yugi & Slifer Tin comes with a Secret Rare Slifer the Sky Dragon and an Ultra Rare Dark Magician, while the Kaiba & Obelisk Tin features a Secret Rare Obelisk the Tormentor and an Ultra Rare Blue-Eyes White Dragon. Each 2016 Mega-Tin includes three 16-card Mega-Packs highlighting the best from past booster sets and, in addition to the legendary Egyptian God Cards and signature Ultra Rares, each heroic Tin has four more foil promos – including a new Pendulum Monster, Aether, the Evil Empowering Dragon and a never-before-seen boss monster for D/D/D’s, D/D/D Gust King Alexander. Each Tin, sold separately, is a fantastic value at $19.99 MSRP. 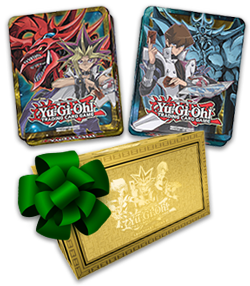 Sure to impress any Yu-Gi-Oh! TCG fan is Legendary Decks II. This remarkable set is overflowing with fan-favorite and collectible cards all presented in one beautiful gold-foil gift box. With three new ready-to-play Decks, Duelists can take on opponents with Exodia, the Forbidden One and all three playable Egyptian God Cards, blaze to victory with Red-Eyes monsters, and unleash the fearsome power of Blue-Eyes White Dragon. Each 132-card Legendary Decks II collection includes three Ultra Rare Token Cards, each card celebrating one of the legendary trio, as well as all-new support cards for Yugi’s Dark Magician theme: Dark Burning Attack, Dark Burning Magic, and the incredible Trap Card Eternal Soul. MSRP: $29.99 per set.

For those inclined to leave shopping until the last minute, a stocking full of booster packs is the way to go. Be the first to give cards from the upcoming 60-card Destiny Soldiers special booster set which are sure to please any level player. Destiny Soldiers uses the popular all-foil ‘4+1’ card configuration as seen in The Secret Forces and the Hidden Arsenal boosters. This set features the return of a fan favorite theme, an incredibly powerful new spin on the Darklords from the Yu-Gi-Oh! manga. Plus, Destiny Soldiers introduces the first brand-new “Destiny HERO” cards since 2008.  Available November 18, each 5-card pack is $3.99 MSRP. 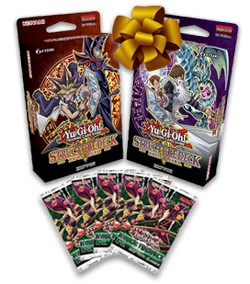 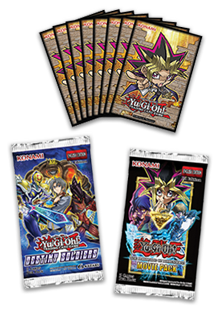 Of course Duelists will need to protect their new cards so why not tuck a brand-new set of glossy, premium quality tournament-legal sleeves into their stocking. The Yu-Gi-Oh! Chibi Card Sleeves feature the iconic Yugi and each pack (MSRP $3.99) contains 50 card sleeves specifically designed for the Yu-Gi-Oh! TRADING CARD GAME.