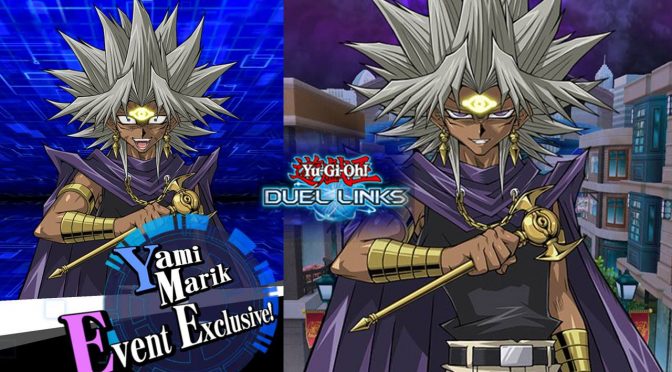 Yu-Gi-Oh! Duel Links’ Yami Marik event part two has started today and it’s brought back the option to obtain Yami Marik as well a way to get the Egyptian God Card called The Winged Dragon of Ra.

The event itself begins today and will run through December 19, 2017 so players have only a limited time if they want to unlock these two rare things.

The game lists out these instructions of how to play:

When you collect enough Map Fragments, you will be able to locate the Rare Hunters!

By proceeding through the Yami Marik event, you can Duel against the Rare Hunters at the Gate! Collect Event Points to progress!

The Winged Dragon of Ra is a very powerful card but it doesn’t have all the effects you’ll find in the anime. That doesn’t make this card any less powerful..

Ra isn’t the only powerful card Yami Marik has as you’ll also have the chance of getting a Lava Golem as an Ultra Rare drop from him. The Lava Golem is part of one of the meta decks so that’ll be a good card to pick up if you’re in to that sort of thing.

Yami Marik has an ability called “Shadow Game” which deals damage to both players according to the number of cards in their graveyards. Even if you don’t plan on getting Ra, it’s important to get Yami Marik for this at least.