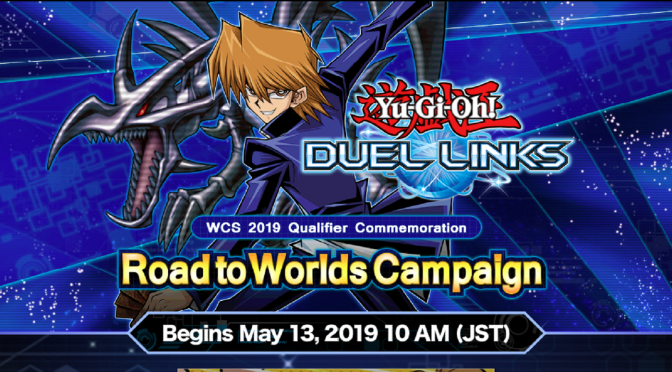 As an integral part of the Yu-Gi-Oh! World Championship 2019 (WCS2019), this Road to Worlds Campaign provides all the competitive tools needed to participate in the Yu-Gi-Oh! ESport tournament. Duel Links.

The Duelists who will come out winners from the WCS2019 qualifiers, which will be held starting from May 28th, will meet in Berlin from August 10th to 11th to win the world champion title.

Starting today, and until June 30th, the Duelists who will log in to Yu-Gi-Oh! Duel Links will get 1000 free gems as a bonus. In addition to the gems, the Duelists will also have the opportunity to obtain the contents of the Road to Worlds Campaign which include:

Also arriving today, the Structure Deck: Return of the Red-Eyes brings Red-Eyes Retro Dragon, Red-Eyes Fusion and several other cards for Duelists to join and be competitive in online PvP, including the online qualifiers for the 2019 Yu-Gi-Oh! Duel Links World Championship.

Based on the official Yu-Gi-Oh! TRADING CARD GAME, Yu-Gi-Oh! Duel Links brings the popular game to life on mobile devices and on PC. Duelists can kindle the spirit of Yami Yugi, Jaden Yuki, Yusei Fudo and other beloved characters from the Yu-Gi-Oh! franchise in competitive card battle action.