Yu-Gi-Oh! World has new details to share about the upcoming TRADING CARD GAME 2019-2020 tournament season, kicking off the weekend of August 16 with the Ultimate Duelist Series – 2019 Summer Invitational (UDS) in Indianapolis, Indiana, where North America’s greatest will go head-to-head in a brand-new format. Duelists will compete for the title of Ultimate Duelist and one of the coolest prizes in the Yu-Gi-Oh! TCG today: the Ultimate Duelist Championship Title Belt.

Soon after, we’ll see the return of Regional Qualifiers across dozens of venues, as well as not one, not two, but a whopping four Yu-Gi-Oh! Championship Series (YCS) tournaments, beginning August 24 in Portland, Oregon!

Duelists competing in a YCS will compete against the best of the best from all over the world, vying for prizes, pride, and an all-new Championship Prize Card never before seen in the Yu-Gi-Oh! TCG – the first-ever Prize Card Link Monster, the epic Duel Link Dragon, the Duel Dragon. At the Portland Metropolitan Exposition Center, Duelists will experience a number of firsts: the first-ever Premier Event in Oregon, the first YCS of the new Advanced Format, and the debut of the previously mentioned YCS Prize Card Duel Link Dragon, the Duel Dragon.

The TRADING CARD GAME 2019-2020 tournament season will continue with YCS Niagara Falls in Ontario and YCS Guadalajara in Mexico in September, and YCS Fort Worth in Texas in October.

We have the full Konami press release below with additional details specific to each tournament.

THE NEW TOURNAMENT SEASON IS GOING TO BE HUGE IN THE Yu-Gi-Oh! TRADING CARD GAME!

A new Forbidden & Limited List brought a “soft reboot” to the Advanced Format and now Duelists across the globe are working hard to come up with new tournament-topping Deck strategies. But they don’t have much time!

Konami Digital Entertainment, Inc. (KONAMI) is proud to bring the Ultimate Duelist Series – 2019 Summer Invitational (UDS) to Indianapolis, Indiana, where North America’s greatest will go head-to-head in a brand-new format. The first big event of the season, the UDS will serve as the jumping-off point for a new age of competition, and a showcase for Dueling creativity.

From there we’ll see the return of Regional Qualifiers across dozens of venues, as well as not one, not two, but a whopping four Yu-Gi-Oh! Championship Series (YCS) tournaments! Duelists competing in a YCS will compete against the best of the best from all over the world, vying for prizes, pride, and an all-new Championship Prize Card never before seen in the Yu-Gi-Oh! TCG – the first-ever Prize Card Link Monster, the epic Duel Link Dragon, the Duel Dragon. It all kicks off the weekend of August 16 at the Indiana Convention Center in Indianapolis with the UDS 2019 Summer Invitational! All year long, determined Duelists have collected UDS Points through participation in Tier 2 and Tier 3 events like Regional Qualifiers, Dragon Duels, and YCS tournaments. Now it’s time to cash in! Competitors with a minimum of 100 UDS Points can redeem them for a seat in the UDS 2019 Summer Invitational main event, where they’ll compete for the title of Ultimate Duelist and one of the coolest prizes in the Yu-Gi-Oh! TCG today: the Ultimate Duelist Championship Title Belt. 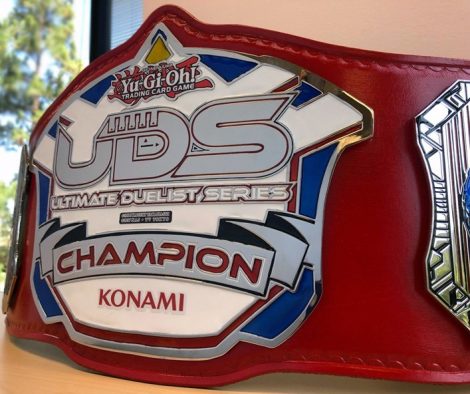 Winning a UDS Invitational and hoisting the strap brings special rewards, including paid travel and accommodations (only available to KDE-US territory players) to the next UDS Invitational and VIP status at big events for the life of the UDS program. That means UDS Invitational Champions get to Duel in style with their own special seating, priority tournament coverage and a 2-Round Bye, so they can skip the first two rounds of any Regional Qualifier, Ultimate Duelist Series Invitational or Yu-Gi-Oh! Championship Series event. Add in some incredible exclusives like lanyards, pins, and a luxury cloth game mat only available to UDS attendees, and you’ve got an incredible weekend for main event contenders and Public Event Duelists alike.

Next up the Yu-Gi-Oh! Championship Series takes over as YCS action invades Portland, Oregon. The UDS in Indianapolis will give us a glimpse of the new format, but YCS Portland throws the doors wide open to all Duelists hungry for competition and fun. Hundreds of Duelists will assemble in Portland for a tournament of firsts: the first-ever Premier Event in Oregon, the first YCS of the new Advanced Format, and the debut of the new YCS Prize Card Duel Link Dragon, the Duel Dragon. YCS Portland will also be the first Premier Event to include cards from the Fists of the Gadgets booster set, launching Friday August 23 just before the YCS. Will the Brotherhood of the Fire Fist bring the heat with their return? Will the “Gadget” monsters wreak mechanized mayhem? We’ll find out on August 24 at the Portland Metropolitan Exposition Center.

One month later Championship Dueling returns to the Great White North with YCS Niagara Falls! Canadian and American Duelists alike will gather at the Golden Horseshoe to compete for YCS title gold, in a competitive field bolstered by the release of the 2019 Gold Sarcophagus Tin and Rising Rampage Special Edition. Competition will be at an all-time high with lots of established strategies, sure, but the ghosts of tournaments past have set the stage for surprising swerves: last year’s YCS Niagara Falls was one of the most shocking tournaments of the year with countless rogue Decks stealing the spotlight. It all goes down on September 21 at the Scotiabank Convention Centre, so get ready to expect the unexpected.

Just days after the YCS in Canada, focus will shift to sunnier climes. The Fiesta Inn Guadalajara Expo will play host to the first Latin American YCS of the year. Arriving hot on the heels of Legendary Duelists: Immortal Destiny, the final Mexican Championship tournament of the year could become a proving ground for some villainous Decks. New support for Dark Necrofear, “Evil HERO”, and the “Predaplant” monsters are just some of the shadowy threats getting their Championship spotlight start on September 28.

Two weeks later the competition jumps back to the United States with YCS Fort Worth! Everything’s bigger in Texas, and that includes the Dueling action at what could be one of the biggest, best attended Premier Events of the year. The action starts October 5 at the Fort Worth Convention Center.