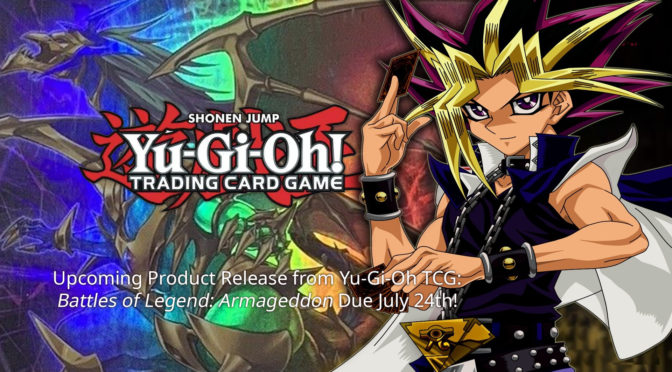 We hope you are doing well and staying safe/healthy during these challenging and uncertain times! Not withstanding the title of today’s upcoming release, we would like to share some positive news from Konami.

We are excited to provide information about an upcoming product release from the Yu-Gi-Oh! TRADING CARD GAME: Battles of Legend: Armageddon!

Due to be on shelves July 24th, Battles of Legend: Armageddon (MSRP: $3.99) is an all-foil booster set filled to the brim with never-before-released cards from the Yu-Gi-Oh! manga and anime series, powerful tournament-level mainstays, sought-after themed support, and foil upgrades for fan favorites! Each 5-card pack contains 4 Ultra Rares and 1 Secret Rare.

Here is the full product fact sheet with additional details:

Battles of Legend: Armageddon is set for impact this July, unleashing ultimate Dueling devastation upon the Summer! This all-foil booster set is filled to the brim with never-before-released cards from the Yu-Gi-Oh! manga and anime series, powerful tournament-level mainstays, sought-after themed support, and foil upgrades for fan favorites!

Here’s a glimpse at just some of what you will see:

Name and contents subject to change.*