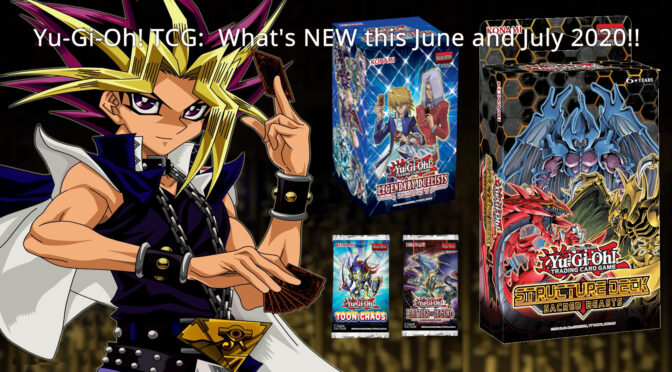 We want to share  some more information about a few upcoming product releases for Yu-Gi-Oh! TRADING CARD GAME coming this  June and July 2020:

After a long delay, Eternity Code (MSRP: $3.99 per 9-card pack) finally arrived on June 5th with new support for Ignition Assault themes like the Ancient Warriors, Plunder Patroll and the @Ignisters! Be sure to look for our review coming soon.

The complete set includes 60 different cards, 15 of which can appear as Collector’s Rares: 35 Rares, 15 Super Rares and 10 Ultra Rares.

Hitting shelves July 10, Structure Deck: Sacred Beasts (MSRP: $9.99 per box) revives the three Sacred Beasts from Yu-Gi-Oh! GX all in one Deck, uniting them in a single strategy.

Finally debuting on July 24, Battles of Legend: Armageddon (MSRP: $3.99 per 5-card pack) is an all-foil booster set filled to the brim with never-before-released cards from the Yu-Gi-Oh! manga and anime series, powerful tournament-level mainstays, sought-after themed support, and foil upgrades for fan favorites!

We have the the official full press release below with additional product details:

QUELL THE CHAOS IN THE Yu-Gi-Oh! TRADING CARD GAME!

After a long delay, Eternity Code is finally here with new support for Ignition Assault themes like the Ancient Warriors, Plunder Patroll and the @Ignisters! Dueling has changed, and competitors have more ways to make the most of their Fusion, Synchro and Xyz monsters. Eternity Code answers the call, bringing new legacy support for countless classic themes new and old, catapulting them back into the tournament arena. Girsu, the Orcust Mekk-Knight kicks off your combos by setting up cards in your Graveyard, and Special Summoning Tokens to help build your field! Animadorned Archosaur is a must for Dino-Duelists, destroying your Dinosaurs to trigger big effects, adding monsters or even an “Evolution Pill” Spell from your Deck. Chamber Dragonmaid, Madolche Salon, Traptrix Allomerus, Machina Metalcruncher and many more all offer new support to established themes, bringing more choices to your tournament scene. 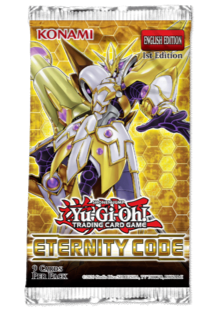 From Traptrix and Tindangles to Megaliths and Marincess, to Gizmek and Goukis and beyond, Eternity Code’s a celebration of the Yu-Gi-Oh! TCG’s greatest hits of the modern era. The complete set comes with 100 cards: 50 Commons, 26 Super Rares, 14 Ultra Rares and 10 Secret Rares. In stores now! MSRP: $3.99 per 9-card pack. 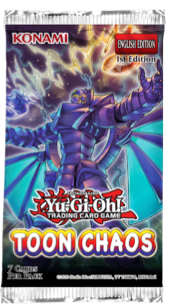 Straight out of the Duelist Kingdom storyline, Toon Chaos revisits two of the most time-honored themes in Dueling history: Yugi’s Chaos monsters and Pegasus’ sinister Toons. Along with a lineup of classic crowd-pleasers, Toon Chaos includes 3 new Chaos monsters like The Chaos Creator. It’s a new addition to the LIGHT and DARK arsenal that Special Summons a banished monster, while returning other banished monsters to your Deck. You’ll also find cards to help you get them from your Deck and onto the field. On Pegasus’ side watch out for Toon Black Luster Soldier, an animated rework of the revered Envoy of the Beginning, plus more new cards that boost the speed of the Toon Deck for modern play!

Looking beyond the clash of Chaos and cartoons, you’ll also find a pair of new Noble Knights and the return of long-awaited favorites like Pot of Extravagance! And Toon Chaos will debut the stunning new “Collector’s Rare” rarity, appearing outside of Asia for the first time ever. A total of 15 cards will appear in alternate Collector’s Rare versions. 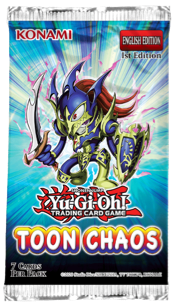 Each box of Legendary Duelists: Season 1 will come with 1 of 7 Secret Rares that weren’t part of the previous sets, selected from the series’ biggest hits. Every box will also have 2 Legendary Duelists: Season 1 packs, each with 18 cards: total 15 Commons and 3 Ultra Rares. One of them will be a standard Ultra Rare with gold lettering. But the other two will be colorful Ultra Rares, each appearing with blue, green or purple foil lettering! 16 Ultra Rare cards can appear in any of the three colors, so you can match your cards to your sleeves and card case, or just play your favorite color to add a little customization to your Deck. 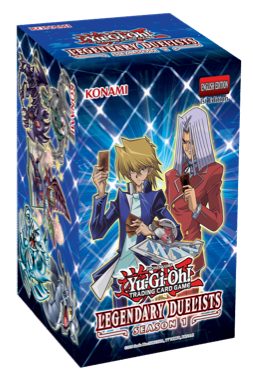 Then it’s a throwback to a past that never was! Structure Deck: Sacred Beasts revives the three Sacred Beasts from Yu-Gi-Oh! GX all in one Deck, uniting them in a single strategy. New support lets you double the power of Raviel, Lord of Phantasms to a towering 8000 Attack Points, negate your opponent’s effects with the power of Hamon, Lord of Striking Thunder, and power up Uria, Lord of Searing Flames with new Trap Cards.

Structure Deck: Sacred Beasts also comes with cards that can power up any Deck: One for One is an incredible card to use for combo strategies; Terraforming and Set Rotation make your Field Spells more reliable; Mystical Space Typhoon is the “original” Spell and Trap destroyer; and Pot of Desires can make almost any Deck more consistent. Whether you’re looking to tap into dark new powers or load up on tournament mainstays, this new Structure Deck can give you an edge. 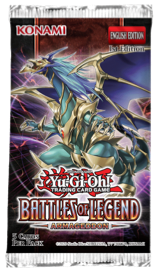 And last but not least, the mighty Battles of Legend series is back with brand-new twists! Battles of Legend: Armageddon is filled with powerful cards like Artifact Sanctum and Chimeratech Megafleet Dragon, popular themed cards like Madolche Anjelly and Black Whirlwind, plus drool-worthy foil upgrades of popular tournament cards like Mecha Phantom Beast O-Lion and Dragon Buster Destruction Sword.

So what’s new? For almost two years, Chaos Emperor, the Dragon of Armageddon was only available as an exclusive Championship Prize Card, awarded solely to the most proven Duelists in the Yu-Gi-Oh! Championship Series. But now it’s back, and for the people! You’ll also find iconic Dragon monsters like Trishula, the Dragon of Icy Imprisonment, Dark Armed, the Dragon of Annihilation and Judgment, the Dragon of Heaven. Fans of Yu-Gi-Oh! GX will also get their first chance to collect Jim Cook’s “Fossil” cards, a unique Fusion strategy that digs Fusion Spell Cards out of the Graveyard to use them again and again, unleashing a Level 8 dual-attacking behemoth!

Be sure to check back here on YuGiOh! World for more upcoming release information and coverage and reviews of the new releases as they happen.