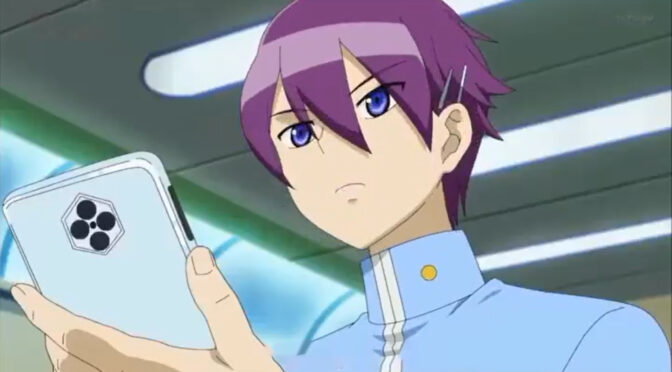 Gakuto Sogetsu is an adamant, disciplined member of the student council of Goha 7th Elementary.

Gakuto is a lean boy with deep-blue eyes and purple hair, which covers his eyes a bit. He also wears two white hairclips to the left side of his hair. He wears a plain light-blue uniform, with a pocket on his left side of the chest, and a symbol on the left part of his collar. He also wears black shoes.

At other times, Gakuto wears a blue kimono that has a black/light-blue pattern around his waist. He also wears a regal black/red cloak with yellow outlines.

Gakuto is a disciplined, serious individual, who has not been late to school a single day. He passes this virtue to his Dueling style, and believes the current Master Duels are fine as they are.

He becomes very irritated and agitated when people do not follow rules, especially Yuga Odo. Gakuto is significantly more reluctant to disobey Goha’s ways than Luke or Yuga, he tends to panic whenever his friends to something that would break the rules and is quick to “beg” Goha for forgiveness when he thinks he’s in trouble.

Gakuto Sogetsu finds himself conflicted between his desire to follow the rules and enforce them as the student council president, and the enjoyment he finds from hanging out with his new friends which often involves breaking the rules. He is largely unable to decline requests out of his fellow students, at times taking in too many tasks at once even largely mundane ones such as teaching math or filling a sport team vacancy, well outside the norm for student presidents (and unknowingly also breaking the rules at times due to being too focused in his current duties).

He is also honorable and stepped down from presidency after losing a duel, although he was easily reinstated afterwards showing he has very high charisma and significant approval. He does at times show a penchant for bad puns and is severely tone-deaf.

Gakuto Sogetsu can walk comically quickly, never moving from an upright posture when doing so. He puts this to good use when needing to swiftly retrieve Yuga’s Duel Bicycle. However, this backfires when he accidentally runs in the hall when in a hurry. He also seems to be quite athletic, easily dodging opposing rugby players while at the same time taking questions from the students.

Gakuto plays a Stall Deck based around “Fiendish Commander Yameruler”, which prevents both players from Tribute Summoning high Level monsters, making it more difficult for the opponent to summon their ace cards. He compliments this strategy with monsters that have typically higher DEF.

When attacking, Gakuto Sogetsu relies on “Shield & Sword” to use his monsters’ high DEF for aggressive purposes, then he either switches his monsters back to Defense position after they attacked or removes them from the field so the opponent can’t capitalize on their low ATK.