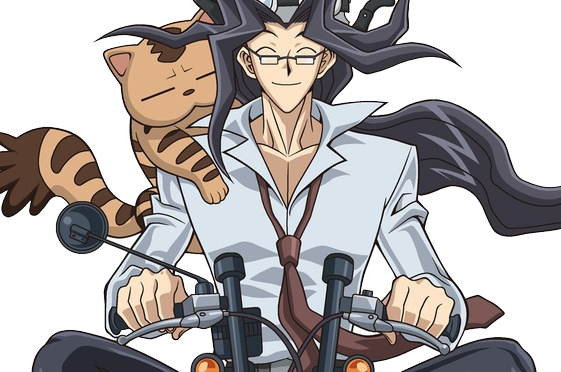 Professor Lyman Banner – A fabled alchemist and member of the Shadow Riders, Banner largely supports the protagonists for most of the first season of the series, though he is directly responsible for numerous events meant to orchestrate the revival of the Sacred Beasts.

In the timeline of the Yu-Gi-Oh! GX anime, Banner was working on his alchemic research long before his arrival at Duel Academy, intent on creating the legendary Philosopher’s Stone. His studies led him to discover an ancient tomb during the same period of time when Maximillion Pegasus first discovered Duel Monsters. Within, he unearthed three stone tablets adorned with the likenesses of the Sacred Beasts. In the English version, he was cursed for this intrusion, while in the Japanese version, he would later be stricken with a fatal illness. To prolong his life, Banner developed a homunculus in his own image to transfer his soul into his new body. However, it began to crumble, so he resolved to joining the Shadow Riders as its seventh and final member in order to attain the power of the Sacred Beasts to fulfill his dreams of creating the Philosopher’s Stone, and use it to obtain immortality.

Banner was eventually hired as an alchemy professor of the Slifer Red dormitory at Duel Academy. While there, he lured several Obelisk Blue students including Atticus Rhodes into the abandoned Obelisk Blue dormitory, where they disappeared. He would resume his job without coming under suspicion, ultimately charged with watching over Jaden Yuki, Syrus Truesdale, Chumley Huffington, as well as the rest of the students of Slifer Red.

Using the pseudonym of Amnael (Amunaeru?), Banner systematically defeats Alexis Rhodes and Chazz Princeton when the Shadow Riders put their plans into motion, taking their Spirit Keys to open the gate behind which the Sacred Beasts are sealed. He locks Alexis, Chazz, and Atticus within the Emerald Tablet,which holds his Shadow Charm on the cover, and guides Jaden to his lair with his sigil to challenge him to a Duel. Upon his defeat, Banner gives Jaden his Emerald Tablet, and with it, the card, Sabatiel – The Philosopher’s Stone. His original mummified body and homunculus vessel then dissolve into dust. From then on, his soul resides within the body of his pet cat, Pharaoh, though he would return on occasion in subsequent seasons to assist Jaden. 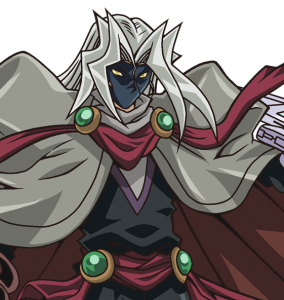 Touting himself the ultimate alchemist, Amnael seeks to revive The Sacred Beasts and use their power to gain eternal life. The Shadow Rider Amnael’s mastery of life and death makes him steeped in mystery, but who lies behind the mask may be the greatest mystery of all.

Banner’s personality varies greatly from his original Japanese counterpart in terms of his actions and intentions during the Duel with Jaden. In the English version, Banner lies about having rigged all of Jaden’s Duels so that he would be chosen as one of the Key Keepers, and confesses that he joined the Shadow Riders to prepare him for the final battle against Kagemaru. In the Japanese version, Daitokuji never does this, and instead views Judai as a “fusion genius” who must face adversity head on in order to learn the secrets of alchemy which have allowed him to triumph. He is last seen with Jaden running off to another adventure. 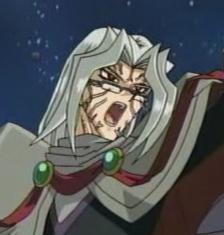 In the original series counterpart Daitokuji ends the majority of his sentences with “nya” (Japanese cat onomatopoeia).

Banner plays an Alchemy deck, which draws a relationship between the science and universe. His strategy relies on the removal of his own cards from the game through Chaos Distil and Macro Cosmos, supported by the Special Summoning of Alchemy Beasts (???, Renkinju-?), based on common base metals and animals used in alchemy to transmute and refine gold, and the Alchemic Processes, based on four of the seven main stages in transmutation. References are made throughout his deck to concepts in alchemy, including mentions of the Ouroboros, the Seal of Solomon, Hermes Trismegistus, and the macrocosm and microcosm philosophy.