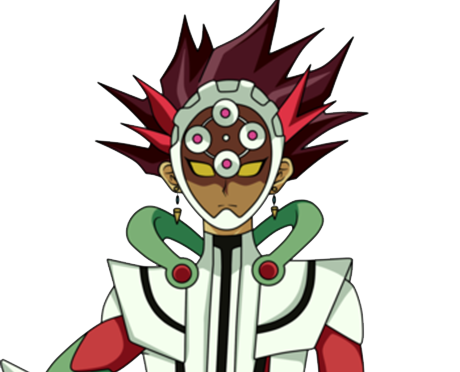 Revolver is the leader of the Knights of Hanoi, a mysterious hacker group that hacks via Dueling inside LINK VRAINS. 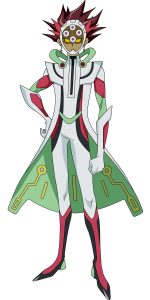 While in LINK VRAINS, Revolver is a tan-skinned man with yellow eyes without irises or pupils, and black hair with orange and red highlights. His ears are pierced with Egyptian-style earrings with a blue crystal and an elongated gold triangular prism. He wears a mask with yellow glass and a white casing with a diamond-shaped pattern of white dots with red centers, linked together by a white circle that surround a white dot in the center of his forehead.

Revolver wears a white jumpsuit with a black elongated “T” shape tracing to the bottom of his chest, red ovals overlaying black ovals on the sides of the torso, and a v-shaped line of green where a belt would be. He wears a white trench coat lined with green with golden lines patterning both the inside and the outside of the coat. The sleeves are green white shoulder-pads and red diagonal bands on the bicep, making it unclear whether or not they are part of the jumpsuit or the coat. Revolver also wears a small white mantle with a black line tracing around the middle, and a green ornament attached at the front on either side of his neck and at the back by red gems. Revolver wears white-elbow length gloves with red diamond shapes on his forearm, and black boots with green heels and red patterns on the front that may be part of his jumpsuit.