When Joey accepts a duel with Mai, the girl from the boat, his cocky attitude vanishes after just the first move; because Mai makes it without even looking at what card it was she played! Forgetting everything he’s learned about the game, Joey plays without thinking, because he mind is stuck on figuring out how Mai plays without looking.

After taking some advice from Yugi, Joey closes his eyes and concentrates. While concentrating, he realizes how Mai can tell what card is what without flipping them over because she has sprayed them all with different perfume fragrances. Mai is angry that Joey has figured out her trick, but with her monsters multiplying on the field, she

sees no way to loose. But Joey trusts in the heart of the cards, and draws the Time Wizard; a card Yugi gave him on the boat.

Using it’s time magic, it evolves Joey’s Baby Dragon on the field into a powerful Thousand Dragon, and making Mai’s monsters age. Joey attacks with his evolved dragon and wipes Mai’s life points out in one blow. Before he leaves, he tells Mai that there’s more to dueling than just beating the opponent; you need to learn to care about someone. 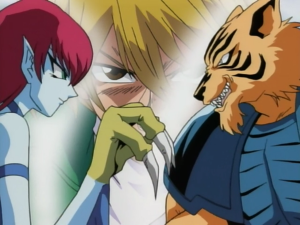