Its now been six hours since the tournament started. Yugi has 5 star chips, and Joey has 2. At Pegasus’s castle, a small, masked kid is escaping a cell. When a guard realizes, he tells Pegasus about him. Pegasus says to watch Yugi, who he believes the masked kid will want to duel. Meanwhile, while walking, Yugi and company encounter a guard keeping a kid hostage. Tristan, with his odd attitude, attempts to wrestle the guard down, but the guard explains that the kid, who has no star chips left, and must leave the island.

After following him to the boat, where Weevil and other eliminated members are, he explains to Yugi that his star chips were stolen by a masked kid. Yugi returns to the scene of the crime, and finds the masked kid. He is the same kid who escaped the castle where he was held prisoner. He challenges Yugi. After using the Millennium Puzzle to become Yu-Gi-Oh again, he sends out a Winged Dragon, while the kid sends out a Man Eating Plant. After Yugi defeats it, the kid identifies himself as Kaiba’s brother, Mokuba. He want to defeat Yugi, because Kaiba left town after Yugi’s victory against him, and he wants revenge for his relative. But when he starts losing, he steals Yu-Gi-Oh’s star chips instead, and runs away. Meanwhile, on the mainland, Kaiba is sitting in his office, when two of Pegasus’s guards come in, and try to kill him. But Kaiba escapes by jumping out of his window.

After chasing down Mokuba, and convincing him to work together to defeat Pegasus, who is the real enemy, they return to the boat with the kids stolen star chips, but it has already left. Then, the guard nearby steals the star chips of both Yugi and Mokuba, and throws them into the water. Now with drastically less chips each, Mokuba is once again captured. Yugi requests another duel with him later, and the guard agrees to bring him later. When they arrive at the holographic chamber, Mokuba is there with the guard. But so is… Kaiba! He challenges Yugi to a duel, and says “This time, you don’t stand a ghost of a chance”.
TO BE CONTINUED… 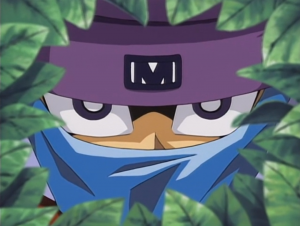