Kaiba? Impossible! How could he have gotten there? The guard holding Mokuba captive claimed that two witnesses saw Kaiba jump to his death. This had to be Kaiba’s ghost! But it wasn’t. Kaiba was at that very moment lurking around his neighborhood. He had managed to grab onto a small plateau while falling from his office window. He found his secret office door, and went inside. After using his own computer to attempt to crack the Duelist Kingdom’s security, he found that Yugi’s files were encrypted. But, he wouldn’t give up. He knew that if Yugi won, his company would be safe from Pegasus. But, after taking a look through Yugi’s deck through his computer, the computer informs him that he somehow lost Exodia (stupid Weevil), which Kaiba thought of as Yugi’s best hope of winning.

Back at the duel, the battle starts out the same as Yugi’s first battle with Kaiba. Yugi’s Dark Magician attacks and does some damage to “Kaiba”. But then, “Kaiba” sends out a BlueEyes White Dragon. Because Kaiba had the only three remaining BlueEyes White Dragons with him, this had to be Kaiba’s deck. Mokuba however, insists that this isn’t Kaiba. But the real Kaiba, back in his secret lab, hacked into the satellite that transfers data between the Duelist Kingdom and other locations. He altered its course to crash into the mainframe of Pegasus’s Duelist Kingdom Computer. The system switched to the backup system automatically, but it lost the extra security over Yugi’s files. Kaiba found where Yugi was dueling, but his computer couldn’t get in. However, he inputted a virus, and overloaded the door. The next blockade was a password, but Kaiba, who had a feeling that Pegasus’s arrogance would be involved, guessed the password correctly: PEGASUS.

Meanwhile, Yugi managed to cover his Dark Magician in one of four hats. Confusing “Kaiba”, Yugi explains that if he guesses the wrong hat, his something bad will happen to him. There is a 25% chance that “Kaiba” will guess it right. Will he? For that matter, who is this person impersonating Kaiba’s ghost?
TO BE CONTINUED… 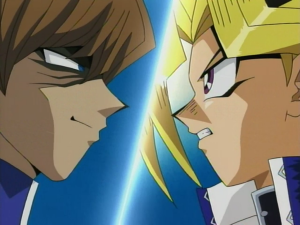