NOTE: The American version was combined into one episode called “Panik Attack”. All other countries received the episode in its two-part form, which was also released on the second volume of the VHS/DVD collection, “Evil Spirit of the Ring” in the US, but it eventually aired on 4Kids TV on January 6, 2007.

Having heard somebody scream, Yugi, Joey, Tristan, Taya and Bakura run to see what has happened. Reaching a nearby dueling arena, they arrive just in time to see Mai’s Harpy Lady Sisters be defeated in a duel. As Mai looks on in dismay, her opponent introduces himself as Panik, one of the Duelist Kingdom Eliminators. Panik claims all of Mai’s star chips, Mai warns the group to get away before Panik gets to them as well, but Yugi stands strong, challenging Panik to a duel to win back Mai’s star chips. Mai tries to persuade Yugi not to duel Panik, unsure as to whether he would be able to win, but Panik seems eager to duel Yugi. He explains that Pegasus has offered a generous bounty to the eliminator who defeats Yugi, but warns Yugi that he would be willing to defeat him even if there wasn’t any reward. As the two prepare to duel, Panik explains that there is more to dueling than strategy and Mai warns Yugi that Panik is a ruthless duelist, however Yugi is still determined to duel.

As Yugi steps up to the dueling arena, his feet are clasped into place to prevent him from moving and then bursts of flame shoot out, barely missing him. As Mai and the others doubt that Yugi can win, he still seems confident in his chances. However as Panik plays his first card, the Castle of Dark Illusions, things don’t seem to be going in Yugi’s favor. As the Castle appears on the field, it smothers Panik’s half of the arena in darkness, preventing Yugi from seeing which cards Panik has played. Panik explains that on this arena the only source of a field power bonus is the night.

An uneasy Yugi plays the Celtic Guardian in defense mode, but as Panik plays a monster onto the field he attacks Yugi’s Guardian, destroying it. Realizing that he can’t attack monsters he can’t see, Yugi looks for a way to destroy the Castle of Dark Illusions, but with the field power bonus it is nearly impenetrable. Yugi plays the Winged Dragon in defense mode, Panik senses that his opponent is beginning to fret as he plays a second monster into the darkness. However as Yugi’s turn begins, he uses the Winged Dragon to attack the darkness, temporarily revealing the monsters that Panik has on the field. Even so, Panik attacks the Dragon, destroying it and reducing Yugi’s life points to 1606.

Panik begins to taunt Yugi, telling him that he can’t win as long as the Castle of Dark Illusions is still in play, but Yugi is unfazed and begins to laugh at Panik, telling him that he knows exactly how to win. Showing Panik the Swords of Revealing Light, he tells him that he will use it to stop his monsters and dispel the darkness. As Mai watches on, shocked at the amateurish mistake Yugi has made in announcing his strategy, Yugi warns Panik that he will defeat him in five turns. Yugi then plays the Curse of Dragon in defense mode, he also plays a card face down, warning Panik that this card will make him see the light. Certain that the card is Yugi’s Swords of Revealing Light, Panik summons the Reaper of the Cards to destroy Yugi’s Magic card. However as the Reaper attacks, it is unable to finish the move as Yugi reveals that the card was not his Revealing Light but actually the Spell Binding Circle.

With the Reaper of the Cards caught within Yugi’s trap he is free to play his Revealing Light whenever he wants. As Mai looks on, amazed at Yugi’s strength in such tough conditions, Yugi decides the time has come to play the Swords of Revealing Light. Playing one card face down, Yugi activates the Swords, flooding Panik’s side of the field in a bright light which not only reveals his monsters but prevents them from attacking. However while Yugi seems confident that he can keep his promise to defeat Panik within the next four turns, Panik also seems sure that victory will be his. 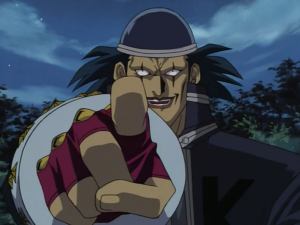