Joey is running along the clouds… chased by a giant BlueEyes White Dragon! All of a sudden, he sees Kaiba. He begs Kaiba to call off the dragon, and Kaiba says that Joey has to obey him like a dog. All of a sudden, Joey is a dog! Then light…. its morning on the Duelist Kingdom. Joey wakes up from his dream. His confidence is obviously still damaged from his loss to Kaiba during the last night. Taya says that Mai, who was camping with them for the time, had left to continue dueling, but she left a note for Yugi that said “I owe you eight star chips.”

Little do the five of them know that they are being spied on by three weirdos, lost souls, a big strong dumb one, a red haired one, and a kid who looks like a zombie. They run back to their master, who is revealed to be Bandit Keith, the man who lost to the kid in the match Kaiba mentioned last episode. They inform him about Joey, and how arrogant he is. Bandit Keith takes his cronies to a cave, where Keith informs them about a hidden arena. He tells Bones (the zombie kid) to lure Joey into the cave to duel. He also gives bones lots of new cards to put in his deck. Meanwhile, Joey is out at a waterfall washing his face, when the big strong guy comes up and knocks him out.

He wakes up in the cave, attached to a holographic arena. He never agrees to the duel, but Bones tells him that if he runs away, he’ll be just a little dog. Remembering his dream, he accepts the challenge. In order to psyche Joey out, Bones calls this arena “The Arena of Lost Souls”, and he says if he loses, he’ll die and become a zombie. Bandit Keith is hanging out behind Bones, telling him what to do. The cave arena will give zombie cards a field power bonus, but the cards Bandit Keith gave Bones weren’t zombie cards at all, just regular ones. Much to Bones’ dismay, Joey’s Axe Raider kills his first three creatures. Bones thinks that Keith wants him to lost purposely for some reason. Meanwhile, Yugi, Taya, Tristan, and Baccura are looking for Joey. They find the cave, and go inside. Inside are real coffins and skulls, obviously a result of Pegasus’s sick sense of humor. Back at the duel, Bones draws a card that allows all of his dead cards to return as zombies. Now he realizes that Bandit Keith was not trying to steer him wrong at all. He plays the card, and all three now zombie field power bonused dead duel monsters gang up on Joey’s Axe Raider and Flame Swordsman.
TO BE CONTINUED… 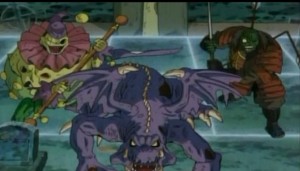 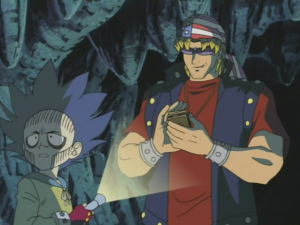