It seems like Yugi’s hope is lost as Kaiba has managed to combine the Blue Eyes Ultimate Dragon. But as Yugi draws the card that could be his last, he begins to see a way out of defeat. Playing the Karebo, the weakest monster card in the game, he begins to multiply it with a magic card creating an unstoppable defense. As Kaiba attacks, the Karebo have multiplied into a defensive wall of hundreds of monsters, capable of stopping even the Blue Eyes’ attacks. While Kaiba has the ultimate attack monster, Yugi has managed to create an ultimate defense to counter it. Not only that, but Yugi is beginning to spin a plan which will destroy Kaiba’s Blue Eyes Ultimate Dragon once and for all.

Using a trick from Kaiba’s book, Yugi uses a Polymerisation card to create a combination monster. But rather than polymerising with one of his own monsters, Yugi uses the Living Arrow to fuse his Mammoth Graveyard with Kaiba’s Blue Eyes. The combination of dead and living monsters causes the Dragon to begin decaying and lose its life points.

Kaiba attacks once more, but the Karebo blocks the attack and continue to multiply. The Blue Eyes is down to only 900 attack points now and Kaiba is beginning to lose hope for ever rescuing his brother. Yugi calls forth his Celtic Guardian and attacks the Blue Eyes, wasting one of the decaying heads and reducing Kaiba’s life points to 400. With the two duelists once again tied, it seems like Yugi could win the duel. But Kaiba is not so willing to accept defeat. In an attempt to win, he backs up towards the castle wall positioning himself behind his Blue Eyes. He warns Yugi that the blast from an attack on the Blue Eyes could knock him off of the ledge and kill him. Yugi is in a stalemate, unable to win without risking destroying Kaiba at the same time. Yugi and Kaiba both have loved ones at stake, but Kaiba is the more ruthless, willing to risk anything to win.

Kaiba tells Yugi that the only thing to do is to surrender, but Yugi is not so sure. In order to make his decision easier, Kaiba uses Reborn the Monster to revive the lost Blue Eyes head. Now with one head at full strength, Kaiba is able to destroy Yugi on his next turn unless he has the will power to attack Kaiba. A battle of consciences rages between the two Yugis. As the duelist Yugi orders the Celtic Guardian to attack, Taya pleads for Yugi to stop. Just as the Guardian is about to strike, normal Yugi prevails and shouts for it to stop.

Kaiba begins to gloat as he attacks the Celtic Guardian, wasting both it and Yugi’s remaining life points. Yugi breaks down and begins to cry as his only chance to save his grandpa is torn away from him. Taya tries to comfort him but he tells her that he is scared of the other presence inside of him and that he will never duel again. Meanwhile Pegasus is notified of the duel’s outcome and authorizes Kaiba’s entry into the castle. With Yugi’s spirit broken, Pegasus no longer has to worry about the only duelist truly capable of beating him. 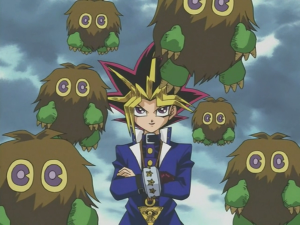