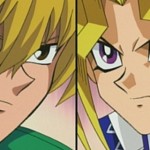 A storm appears above Duelist Kingdom as Joey and Yugi prepare for their duel. Pegasus congratulates them for getting this far. Yugi and Joey vow to give their all in this duel, as they are both fighting for a cause: Joey for is sister, and Yugi to stop Pegasus. After Yugi and Joey remember scenes from past episodes, the duel between the friends begins with Yugi summoning Celtic Guardian (1400/1200). Joey summons Giltia The Magician Knight (1850/1500). After a short but cool battle between the two warriors, Giltia destroys the Guardian (Yugi: 1550). Yugi calls a time-out and tells Joey that, since they arrived on the island, Yugi has taught Joey everything he knows about Duel Monsters and that Joey has left himself wide open for his next monster, Gaia The Fierce Knight (2300/2100).

Gaia destroys Giltia, reducing Joey’s Life Points to 1550. Joey thinks up a plan and plays Armored Lizard (1500/1200) in defense mode. Bakura questions this move, as Armored Lizard is one of Joey’s weakest monsters and Gaia is one of Yugi’s strongest.

Yugi summons Summoned Skull (2500/1200), which quickly destroys the lizard. Joey says that he was waiting for Yugi to summon the skull. Joey summons Flame Swordsman (1800/1600) but then plays Shield & Sword, switching all monsters’ attack and defense points, bringing Skull’s attack down to 1200. Flame Swordsman then destroys it (Yugi: 1150). Yugi summons Curse Of Dragon (2000/1300) and then uses Polymerization to fuse it with Gaia to form Gaia The Dragon Champion (2600/2100). The Dragon Champion then destroys Flame Swordsman (Joey: 750). Joey then puts his plan into action.

He starts by summoning Red Eyes Black Dragon (2400/2000). He then plays Graverobber to take a card from Yugi’s graveyard, so he takes Summoned Skull. He then plays Copycat, copying one card that has been played, so he copies Polymerization, fusing Red Eyes and Skull into Black Skull Dragon (3200/2500). The Dragon then destroys Gaia (Yugi: 550). Yugi congratulates Joey on the good combo, but he says that the duel is still far from over…